Twitter has hidden a tweet by President Donald Trump on the Minneapolis riots behind a public notice accusing him of “glorifying violence”.

“I can’t stand back & watch this happen to a great American City, Minneapolis,” the President had written, in reference to the looting and rioting which has gripped Minnesota’s largest city since video footage of a now-suspended police officer pinning down a black suspect who later died went viral online.

“A total lack of leadership. Either the very weak Radical Left Mayor, Jacob Frey, get his act together and bring the City under control, or I will send in the National Guard & get the job done right,” he added.

….These THUGS are dishonoring the memory of George Floyd, and I won’t let that happen. Just spoke to Governor Tim Walz and told him that the Military is with him all the way. Any difficulty and we will assume control but, when the looting starts, the shooting starts. Thank you!

The President then sent a follow-up tweet, saying: “These THUGS are dishonoring the memory of George Floyd, and I won’t let that happen.”

He added that he had spoken to Governor Tim Walz and “told him that the Military is with him all the way. Any difficulty and we will assume control but, when the looting starts, the shooting starts. Thank you!”

Twitter, however, took the remarkable step of hiding the President’s second tweet, covering it with a public notice appearing on the platform alleging it had “violated the Twitter Rules about glorifying violence.”

The tweet was not deleted outright, however, with the tech giant adding that it had “determined that it may be in the public’s interest for the Tweet to remain accessible” to users electing to click a “View” button. 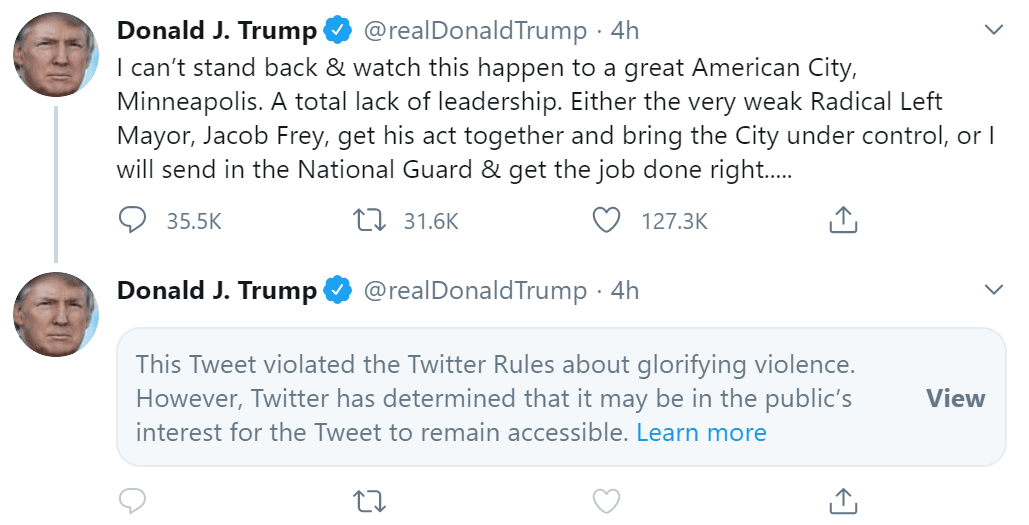 Tweets justifying the riots as a form of protest or defending them as a reasonable response to the George Floyd video are still present on the site in large numbers without any official disclaimers, however.

The move against President Trump by Twitter follows a clash between the American leader and Big Tech over censorship on social media, thought to have been prompted in large part by Twitter slapping dubious “fact-check” disclaimers on the President’s tweets.

It seems that its primary goal is to force tech leaders to stop selectively censoring and marginalising their users, particularly on the conservative side of the political spectrum, and to begin treating all of them fairly, or else lose the special protections afforded to them as “platforms” rather than publishers — who can be held liable for the content they host.

"Today, I am signing an Executive Order to protect and uphold the free speech and rights of the American people." pic.twitter.com/agTIJ2KR6C