Millionaire socialist pop star Billy Bragg has said many stupid things in the course of his excruciating career. But nothing, surely, can match the idiocy of his latest suggestion that Winston Churchill = Antifa. 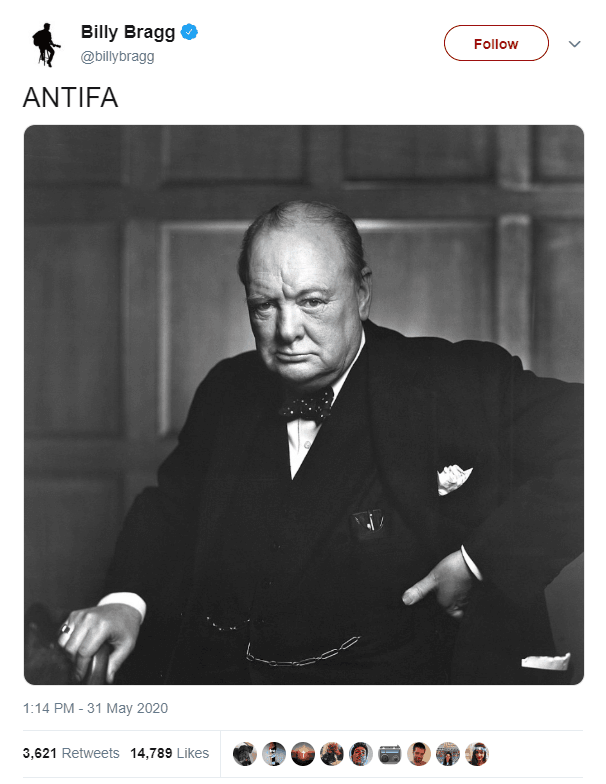 This attempt to rebrand World War II as a heroic victory by the left against fascism is, as I’ve argued before, a Stalinist propaganda trope which bears little resemblance to the truth.

In fact, the similarities between the Communists and the Nazis (and Mussolini’s fascists) were far greater than their differences: all being totalitarian collectivist movements which had no truck with liberty, property rights or democracy.

Winston Churchill would have seen right through Antifa because he would have recognised it as just another manifestation of the hard-left totalitarianism he despised every bit as much as fascism.

Though he never actually said the line sometimes attributed to him ‘the fascists of the future will call himself anti-fascists’, he would certainly have applauded the sentiment.

His alliance with Stalin’s Soviet Union — Antifa’s closest ideological cousin — was always one of reluctance and desperate necessity rather than choice.

Churchill loathed Commies every bit as much as he loathed Nazis. He demonstrated this in late 1944 when he turned on the Greek Communist resistance fighters who, up until that point, had been part of the Allied war against Germany.

All the lefties of the day — from Aneurin Bevin to HG Wells, plus their equivalents in America — were incensed by what they saw as betrayal and they kicked up a huge stink. Churchill stuck to his guns.

Had he not done so, Greece would almost certainly have fallen to the Communists, just like all the other Balkan states did after the war.

Lots of lefties resent Churchill for this. In fact, the best thing about Billy Bragg’s tweet is the blue on blue — or should that be ‘red on red’ — retaliatory strikes from his fellow leftists calling him out for wrongthink.

Churchill ordered to kill antifascist partisans in Greece because he feared these communists more than fascists. https://t.co/fOAVXHRSnb

If only they could all lose, eh? No, wait: they have!