The Conservatives are now more popular with the working class than higher earners, thanks to the party’s support for Brexit and the pledge to redistribute resources away from metropolitan liberal London to other parts of the country.

Meanwhile, Labour is marginally more popular with high-income voters than low-income voters, according to data analysed from the December 2019 general election in a report published on Wednesday.

“Low-income voters, the 2019 General Election and the future of British politics” was published by the Joseph Rowntree Foundation, a British charity that examines and aims to resolve poverty.

Authored by Professor Matthew Goodwin, the University of Kent, and Professor Oliver Heath, Royal Holloway University of London, the study found that “both parties have inverted their traditional support base.” 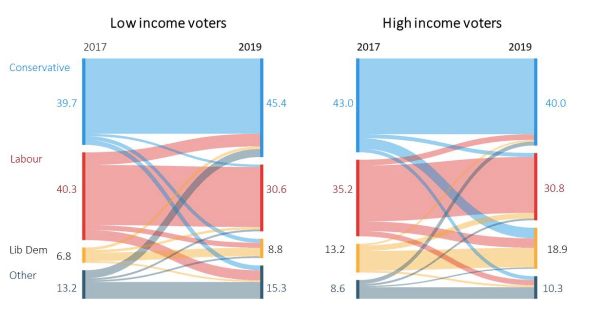 The turning point was the 2019 general election, which had become known as the ‘Brexit election’, triggered after Boris Johnson found himself unable to pass meaningful legislation as he had inherited Theresa May’s pro-Remain parliament.

Labour had also gone from reluctantly accepting the outcome of the referendum in 2017, to calling for a second vote in 2019. That move contributed to Labour losing its lead with low-income voters, while the Tories had retained 90 per cent of the low-income voters who had backed them in 2017.

From May to Johnson, the party has undergone a transformation that has seen the lastest party leader targeting the patriotic working classes who traditionally voted Labour by promising to “level-up” the country and delivering Brexit.

“Their call to ‘level-up’ the nation and redistribute resources away from London to the regions, combined with a clear line on support for Brexit, appealed strongly to voters who had traditionally aligned themselves with Labour,” the study said.

Professors Goodwin and Heath also said that lower-income households, “while they lean left on economic issues, favouring greater economic redistribution, they lean right on cultural issues, favouring greater independence from Europe”. Because this demographic’s outlook “did not fit neatly onto the existing political map”, the Tories became the “main beneficiary of this tension”.

Political identities had also become aligned by Leave or Remain than Right or Left, according to Kings College London research published in December 2019, days before the election.

The Labour Party had continued down the route of backing a second referendum, with senior figures in the party all backing Remain.

“The Labour Party’s drift, under Jeremy Corbyn, to a stronger pro-Remain position, while holding the line on economic redistribution, has weakened its relationship with low-income voters,” Wednesday’s Rowntree report said.

Collapse of the Red Wall: Labour Voters Back Conservatives in Revolt Against the Elites https://t.co/tcUyqIhniI

Labour’s radical retro class warfare manifesto revealed on November 21st, 2019, also likely isolated those Labour voters who were right-leaning on cultural issues, with its pledges to expand the voting franchise to all foreign legal residents and liberalising immigration laws.

The Conservatives were able to win the largest majority since Margaret Thatcher was returned to power in 1987 by breaking through the “Red Wall” which describes the industrial areas of Britain in the North that traditionally vote Labour.

Acknowledging that many who brought him to power may have voted Labour their whole lives and backed the Tories for the first time, Prime Minister Boris Johnson said in his victory speech on December 13th:

“I, and we, will never take your support for granted. I will make it my mission to work night and day, flat out, to prove you right in voting for me this time and to earn your support in the future. In this election, your voice has been heard, and about time, too.”