The one we live in now, tragically.

A white working-class couple in the north of England — Jake Hepple, 24, and his girlfriend Megan Rambadt, 21 — have both been fired because of a stunt Hepple pulled earlier this week when he flew in an aircraft trailing the banner ‘WHITE LIVES MATTER BURNLEY.’

Hepple lost his job as a welder at Lancashire-based Paradigm Precision which issued a statement claiming it does not ‘condone or tolerate racism in any form.’

Rambadt has lost her job working at a Burnley beauty salon after the online mob contacted her employer.

Meanwhile, at Cambridge University, Priyamvada Gopal, an academic from a much more privileged background than either of the above — her father was a diplomat — has been promoted after tweeting that ‘White lives don’t matter.’

Her employer did not merely stand by her but actually thought it was a good idea to promote her as a result. ‘Last night,’ she tweeted, ‘Cambridge promoted me to a full Professorship.’

Thanks to everyone who wrote to @Twitter: the ludicrous ban has been lifted. I am therefore delighted to share with you personally, that last night Cambridge promoted me to a full Professorship. The hate mails & threats are coming in non-stop but @CambridgeCops are following up

It’s possible, of course, that the promotion was purely coincidental. But the timing of the announcement looks suspicious, especially in light of this tweet from Cambridge University.

The University defends the right of its academics to express their own lawful opinions which others might find controversial and deplores in the strongest terms abuse and personal attacks. These attacks are totally unacceptable and must cease.

If you’re a gobby, race-baiting attention-seeker tweeting out serial leftist drivel — as is Gopal’s speciality — then Cambridge University has got your back.

If, on the other hand, you stray off the reservation into more contentious territory and you dare to challenge the woke narrative Cambridge University wants nothing to do with you.

Where, for example, was Cambridge’s support for Noah Carl and Jordan Peterson?

In 2019 Jordan Peterson was invited to become a visiting professor at Cambridge’s school of divinity. But after activist students kicked up a fuss, Cambridge withdrew its invitation with the weasellish statement:

“Cambridge is an inclusive environment and we expect all our staff and visitors to uphold our principles. There is no place here for anyone who cannot.”

But Peterson has not said — and was presumably not planning to say — anything unlawful. So how does that square with its statement above defending the ‘right of its academics to express their own lawful opinions which others might find controversial’?

Cambridge was similarly careless of the free speech rights of another academic Noah Carl. Dr Carl, a graduate research student at St Edmund’s College was hounded out of his fellowship by a mob of left-wing bullies who accused him of legitimising ‘racist pseudoscience.’

This was nonsense. The real reason, as Quillette reported, was that he defended the cause of intellectual inquiry into areas which the left would prefer to keep taboo.

Dr Carl’s crime is that he has defended intelligence researchers who’ve written about the taboo topics of race, genes and IQ and argued that stifling debate in these areas is likely to cause more harm than allowing them to be freely discussed by academics. It appears to be this, and the fact that he spoke at the London Conference of Intelligence in 2017 alongside some of these researchers (although he did not himself speak about race, genes or IQ at that conference), that is the basis for the accusation, made in the letter, that he is guilty of “pseudoscientific racism.”

One of the signatories is Professor David Graeber, the anthropologist and left-wing political activist, who described Dr Carl on Twitter as a “very creepy ‘race scientist’.” When asked to justify this accusation of racism and clarify what aspects of Dr Carl’s research he found “methodologically flawed,” he replied: “that’s easy. The concepts “race” “genetic intelligence” and “criminality” are all concepts with at best questionable scientific validity, so any study that assumes all 3 as unproblematic is so wildly methodologically flawed that one can only assume a racist motive in the author.”

Both Peterson and Carl are men of high seriousness, deep scholarship and great intellectual integrity.

It’s possible that Priyamvada Gopal — author of Midnight’s Labours: Gender, Nation and Narratives of Social Transformation in Transitional India 1932-1954 — possesses some of those qualities too. But her more recently speciality would seem to be self-pitying, self-aggrandising shock jockery.

If you didn’t know better, you might almost suspect that she actually enjoys all the hatred she engenders with her provocative tweets. 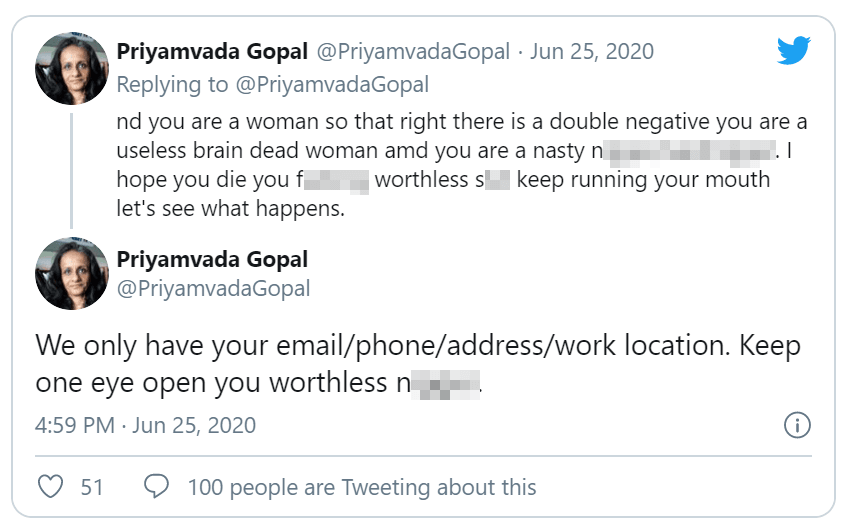 You might also wonder whether someone who dedicates so much of her life to engendering dirty social media spats has quite the gravitas one might have hoped for among professors at Britain’s second-most distinguished university.

But here are the facts of life in Britain in 2020.

If you’re a rude, spoilt, trouble-seeking, race-baiting, cry bully academic from a minority ethnic background and you say horrible, racist things on social media, Cambridge University will promote you in solidarity with the woke agenda.

But if you’re white and working-class and you say something as innocuous as ‘white lives matter’, then you can forget it, your livelihood is toast.