“We had to smash car windows and pull people out because they wouldn’t give us details… they wouldn’t tell us where they’re going”, declares a senior Australian policeman dressed from head to toe in black.

“We had to smash car windows and pull people out because they wouldn’t give us details…they wouldn’t tell us where they’re going” @ClarkeMicah @JamesDelingpole @AlistairHaimes @hector_drummond @V5M1000 https://t.co/FJcA4nMz4o

No, this is not a scene from a prequel to Mad Max where Australia gets taken over by fascists. This is actually happening right now in the Australian state of Victoria, under the regime of power-crazed, hard left premier Daniel Andrews. (Or ‘Kim Jong Dan’, as he is known locally.

Victoria has adopted some of the strictest coronavirus rules anywhere in the world, including an 8 p.m. curfew and police roadblocks to discourage any citizens with pesky notions about personal freedom.

Police are even allowed into your home to carry out spot checks — without a warrant and without your permission.

One or two Australians are resisting and Victoria’s Police Commissioner Shane Patton is responding with the full force of the law.

“Groups of people who classify themselves as ‘sovereign citizens’ — whatever that might mean — people who don’t think the law applies to them: we’ve seen them at checkpoints baiting police, not providing their name and address.”

“On at least three or four occasions in the past week we’ve had to smash the windows of people in cars and pull them out of there so they could provide their details because they weren’t telling us where they were going. They weren’t adhering to the Chief Health Officer guidelines. They weren’t providing their name and their address.”

So presumably, in order to justify these extreme measures, the state of Victoria must be experiencing an exceptional, indeed, unprecedented crisis?

In the state of Victoria there had been just 162 deaths attributed to coronavirus. Even in the whole of Australia the total was only 247.

To put this into perspective, this is less than half the number of people who die in Australia every year from skin diseases, and about one-fifth of the number killed in car accidents.

All for a disease that even if death rates double, won’t kill as many Australians as skin diseases. pic.twitter.com/FB6Tr1OB4m

Australia likes to call itself ‘The Lucky Country’. It prides itself on its no-nonsense, independent, good-humoured, matey culture and its aversion to petty rules and regulation.

But clearly Victoria’s premier Dan Andrews — and his various black-clad henchmen — hasn’t got the memo.

Here — courtesy of Lockdown Sceptics — are the new rules imposed on Victoria’s state capitol of Melbourne, to be enforced for at least the next six weeks:

Perhaps the most depressing thing of all is that a lot of Victorians appear to be enjoying Kim Jong Dan’s iron grip.

According to this ‘postcard from Melbourne’ from one of the few dissenters in Victoria, one enthusiast of the draconian rules and regs has actually produced a homeware range featuring portraits of the Covidfascists responsible: Minister for Health Jenny Mikakos; Premier Dan Andrews; Chief Health Officer Brett Sutton.

Eat your heart out Mad Max. The future’s here and it’s even scarier than the Thunderdome. 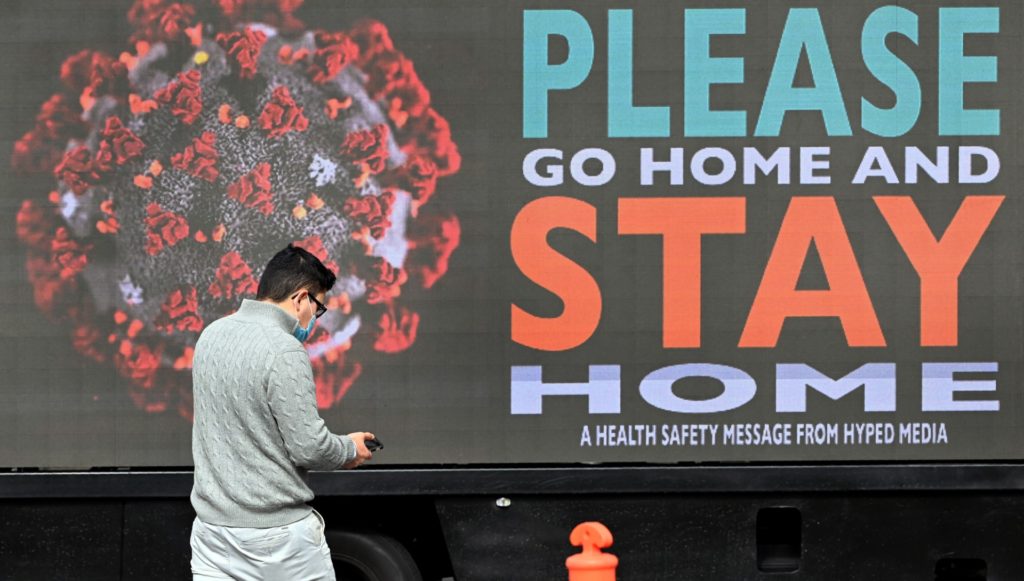 A man walks past a sign on a truck in Melbourne, Victoria, on August 5, 2020, as the city enforces strict lockdown restrictions after a fresh outbreak of the COVID-19 coronavirus. (WILLIAM WEST/AFP via Getty Images)