The message, which believed by some to have paedophilic connotations, was also shared on the drag organisation’s Facebook page on July 26th, where it remains publicly available.

“Love has no age!” reads the post accompanying a picture of an older man wearing a rainbow suit jacket and tie over a bare chest, followed by three emojis in party hats blowing streamers.

“Additional information for those who need it: You can find love even if you’re as old as this guy, but we do not support MAP,” the organisation clarified in an August 11th edit to the Facebook post.

“MAP” is an alternative term for paedophiles, popular in paedophile circles, which stands for “Minor Attracted Persons”.

“We don’t support it, condone that, or have any thing [sic] to do with it,” the addendum continued.

“We are an education and entertainment enterprise teaching children aged 0-12 about LGBT+ people, and about acceptance of those who are different, whether that be sexuality, age, gender, disability or race.” 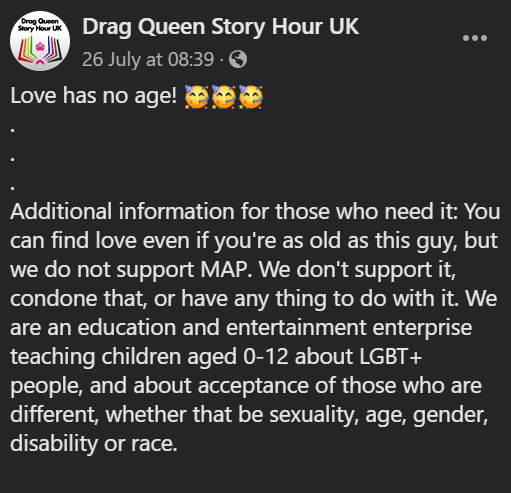 So-called drag queen story hours, in which draq queens read stories, sometimes with an LGBTQ+ bent to them, to young children in locations such as public libraries and schools, are not without controversy, either in the United Kingdom or the United States.

In Houston, Texas, for example, a registered child sex offender was able to read to young children at a drag queen event sponsored by the city government, after the authorities failed to screen him out.

Alberto Garza, stage name Tatiana Mala Nina, had been convicted of sexually assaulting an eight-year-old in 2008.

Houston Public Library said Garza would “not be involved in any future HPL programs” following the scandal.

Drag Queen Story Time is coming to a primary school near you.https://t.co/3gMLoXy5qB