Swedish economist Tino Sanandaji has revealed that while the number of reported crimes in Sweden has remained fairly steady, the severity of crimes and criminal violence has surged in the 21st century.

Sanandaji posted the statistics on his Facebook page, stating that while Swedes have seen a rise in newspaper headlines on violent crime, the government has pointed out that the rate of crimes overall is only slightly higher than the 1990s.

Citing a Cambridge Journal of Evidence-Based Policing study from March of this year, Sanandaji stated that the Crime Harm Index (CHI) for Sweden has in fact greatly increased since the year 2000.

The CHI weights crimes by seriousness, with murders and rapes given more weight than, say, pickpocketing or vandalism. 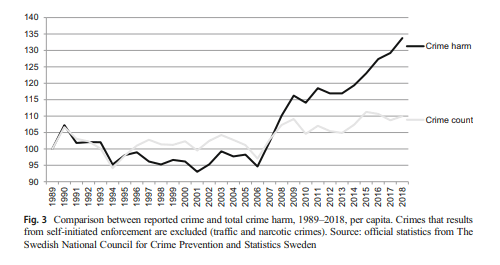 “One of criminologists’ and journalists’ favourite tricks is to blame ‘increased registration rate’, while another is to compare small crimes such as theft against the increase in serious violence, a principle that can be called the ‘equal value of all crimes’,” Sanandaji said.

He went on to criticise Justice Minister Morgan Johansson, alleging: “So if Malmö gets 10 fewer cases of pickpocketing but nine more cases of murder and housing explosions, Morgan Johansson proudly tweets that Malmö has become safer.”

Earlier this year, Swedish broadcaster SVT reported that shootings had increased in the first three and a half months of 2020 compared to the same period the prior year, despite the Wuhan virus outbreak and a major police anti-gang operation titled Operation Rimfrost.

Shootings in Sweden Increasing Despite Coronavirus and Police Operations https://t.co/cwS52GZFfU

Swedish gang crime has even spread across the border to Denmark, where several members of the “Death Squad” gang from the no-go Stockholm suburb of Rinkeby were on trial this week for a double homicide that took place last year in the Copenhagen suburb of Herlev.

Rape has also increased substantially in Sweden in recent years, with a Swedish Crime Prevention Council report released last year stating that sex crimes had tripled between 2014 and 2018.