The Brexit negotiations between the United Kingdom and the European Union concluded on Thursday, Christmas Eve, with the EU’s Ursula von der Leyen calling a press conference and boasting the EU got a “good deal” out of the years of negotiations.

Speaking from Downing Street on Christmas Eve, Prime Minister Johnson announced the agreement of what he terms a “comprehensive, Canada-style free-trade deal” — an agreement that Mr Johnson has been seeking since the beginning of negotiations, which the European Union had said was impossible to strike.

“I’m very pleased to tell you that we have completed the biggest trade deal yet, worth £660 billion a year,” he said, continuing that the deal would protect British jobs by allowing “UK goods to be sold without tariffs and without quotas in the EU market, which will if anything allow our companies to do even more business with our European friends.”

Mr Johnson implied that the deal, which he said was 500 pages long — not 2,000 as previously claimed — and which as yet must be passed in the House of Commons, fulfils completely the June 23rd, 2016 vote to leave the European Union.

Johnson continued that “from January 1st, we are outside the Customs Union and outside the Single Market,” pledging that “British laws will be made solely by the British parliament, interpreted by UK judges sitting in UK courts, and the jurisdiction of the European Court of Justice will come to an end.”

Much of the obstruction on the agreement of a new deal with the bloc hinged on the EU’s demands for continued, permanent access to Britain’s lucrative fishing waters. Mr Johnson said that the UK will regain full control of her waters, after some five-a-half-years of what appears to be another transition period for European fishermen.

He said: “For the first time since 1973, we will be an independent coastal state with full control of our waters with the UK’s share of fish in our waters rising substantially from roughly half today to closer to two-thirds in five-and-a-half years’ time, after which there is no theoretical limit other than those placed by science or conservation on the quantify of the fish we can fish in our waters.”

That the European Union had secured this concession on fishing from the UK, it suggests negotiations on fish would likely continue from this point, given the EU would be unlikely to simply agree to loss of access to fishing waters in 2026.

The prime minister said that in order to support British fishermen rebuild after nearly 50 years of having EU fishermen raiding their waters, the government will help fishing communities with a “big, £100 million programme to modernise their fleets and fish processing industry”.

Another issue holding back a deal was arbitration of deal disputes, with the EU demanding oversight by the ECJ. Mr Johnson said that disputes would be “subject to independent, third-party arbitration” which could be triggered by either party, the UK or the EU, which are now “sovereign equals”.

Closing, the prime minister said: “It is up to us all together as a newly and truly independent nation to realise the immensity of this moment and to make the most of it. Happy Christmas to you all.”

'We have completed the biggest trade deal yet, worth £660 billion a year.'

Prime Minister Boris Johnson confirms a post-Brexit trade deal between the UK and the EU has been done https://t.co/tCRE0Bbtfh pic.twitter.com/Inlptcciy9

Read the original story, including the EU perspective from their press conference, below:

Both the British government and the European Union declared victories of sorts on Thursday afternoon, after months of intense negotiations — and years of talks since Britain voted to leave the European Union in 2016 — came to an end. Boris Johnson’s official office at 10 Downing Street said “Everything that the British public was promised during the 2016 referendum and in the general election last year is delivered by this deal”, while Europe’s Ursula von der Leyen hailed victories on fisheries and the supremacy of EU rules.

Speaking to a near-empty press conference room in Brussels on Thursday, von der Leyen said of the deal: “…so we have finally found an agreement. It was a long and winding road, but we have got a good deal to show for it. It is fair, it is a balanced deal, and it is the right and responsible thing to do for both sides.” 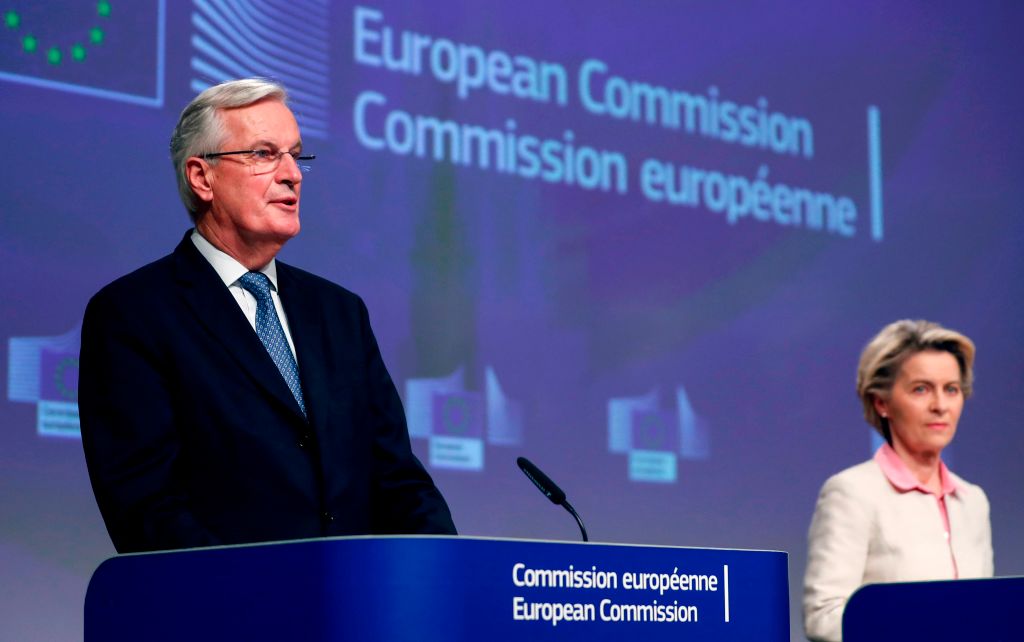 The European Commission boss also spoke of the “effective” and “strong tools” the EU had been handed by the deal to police Britain in the future, citing fisheries and competition where it could intervene. The Eurocrat said the European Union would “react” if the UK “distorted” fair competition and impacted European trade.

“…we have strong measures that can be taken if one party does not play by the rules… there is a strong incentive for both sides to stick to what they agreed to”, the EC President said.

The EU had negotiated on the position that a hard Brexit would have hurt Britain more than the EU, given the bloc could rely on the “might” of its 450 million citizens. This, von der Leyen said, “this shows from a position of strength, you can achieve a lot”.

Von der Leyen also used her parting shot in talks with Britain to make a swipe at what Britons voted for in 2016 and what the UK government tried to achieve in talks, regaining national sovereignty. Giving the European Union’s own, new definition of the word, the former German defence secretary-turned Euro boss explained the EU perspective, that: “of course, this whole debate has always been about sovereignty, but we should cut through the soundbites and ask ourselves what sovereignty actually means in the 21st century.

“For me, it means being able to seamlessly do work, travel, study, and do business in 27 countries. It is about pooling our strength, and speaking together in a world full of great powers. And in a time of crisis, it is about pulling each other up instead of try9ing to get back to your feet alone. And the European Union shows how this works in practice.”

What that meant in practice, she explained, was that the EU is “one of the giants” astride the world. TO all European, she said, “it is time to leave Brexit behind. Our future is made in Europe.”

Whole von der Leyen spoke, the UK government put out their own statement

Deal is done. Everything that the British public was promised during the 2016 referendum and in the general election last year is delivered by this deal.

The announcement came after fevered speculation on Thursday morning whether a deal would land today, or whether talks would spill into Christmas day. As Breitbart London reported Thursday:

Boris Johnson appears to have given up any pretence of standing firm on the repatriation of Britain’s national fishing waters — currently controlled by the EU and exploited mainly by foreign trawlers, with disastrous effects for local fishermen — but he may be able to sell diehard supporters on the idea that the negotiations have been a success because Brussels had demanded even more than Britain will give up.

The deal which now looks set to emerge on fisheries, per the Telegraph, will result in a years-long “transition” — on top of the almost four years the EU has already had since the British people voted to Leave the European Union in 2016 — for EU fishermen, with only some very limited repatriation of British fish and fishing revenue to the United Kingdom.

…This so-called compromise would follow what has become a familiar pattern for Brexit watchers, with the European Union making outlandish demands and the British government negotiating them down to slightly less outlandish demands and hailing this as victory — with the most obvious example being the €40 billion+ “divorce” bill Britain agreed to hand over, despite having put far more into the EU budget than it has taken out over the years, after Brussels had initially demanded nearer €100 bilion.

Johnson also appears to have agreed to something like the “level playing field” the EU had been demanding — allowing the EU to hit the UK with tariffs if it diverges from the bloc’s onerous regulations in a way that makes it more competitive — by accepting in principle a so-called “rebalancing mechanism”, although this process will be overseen by a supposedly impartial arbitration panel rather than EU judges.