The Hungarian government is scrapping income tax for under-25s to help young people “to have a future in Hungary, to start a family, raise children, prosper, and live” the country’s families minister told Breitbart in an exclusive interview.

This is part one of a two-part interview with Katalin Novák, Hungary’s Minister for Family Affairs. Read part two here.

Katalin Novák, who has been helping to drive Prime Minister Viktor Orbán’s pro-family agenda for seven years now, told Breitbart London that, according to preliminary calculations, the policy could help some 460,000 people in the country of roughly ten million, and estimated that “the income of youngsters will increase by 22 per cent” as a result.

“With this initiative, in addition to supporting families raising children, we will also help young people start their own life and establish their financial security,” the minister said — an aspiration many young Americans and Britons may wish their governments shared, given the collapse in youth home ownership in both countries, for example.

“The aim of the [Hungarian] government is to help young adults enter the labour market during and after completing their studies, to create an independent existence, and then to support their access to their own homes and families, as the younger generations are the promise of the future,” Minister Novák explained. 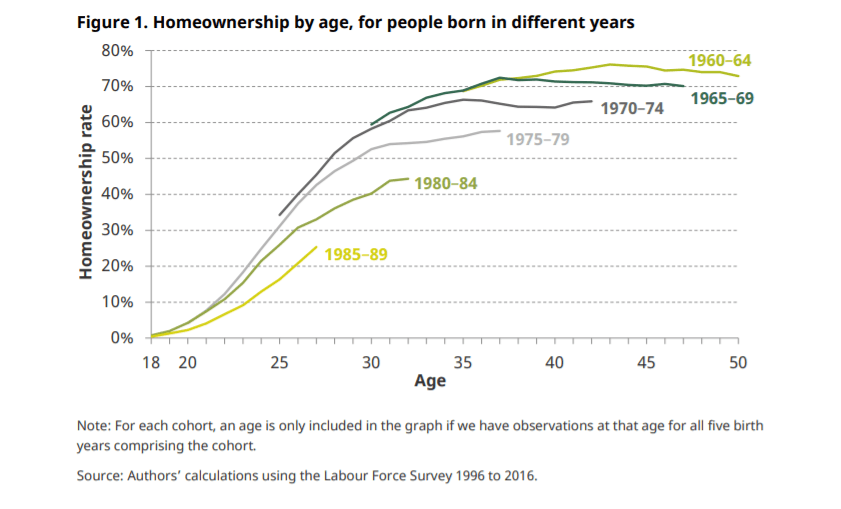 Home ownership in Great Britain by age cohort, via the Institute for Fiscal Studies

The tax cut is the latest in a long line of policies since Viktor Orbán and the Fidesz–KDNP Party Alliance were elected to the first of three consecutive terms in 2010 aimed at building what Minister Novák described as a “work-based economy”, capable of providing the support necessary for them to “build a family-friendly country”.

As with many countries formerly subjected to communist regimes, Hungary has faced the twin threats of not only falling birthrates, like much of North America and Western Europe, but also “brain drain” to wealthier countries — exacerbated by the European Union’s free movement migration regime.

However, while countries such as Britain, France, and Germany, egged on by the European Union and other international bodies, including many United Nations agencies, have turned to mass immigration in an effort to right their ailing demographics, Hungary has adopted what some have derided as a “natalist” approach — i.e. supporting local people to have children rather than pouring resources into attempting to integrate large numbers of foreigners.

“Briefly summarizing the key elements of our family support policy: Our family tax system is based on the principle that the more children you have the less personal income tax you need to pay,” Novák explained, recapping some of the policies the country has already put in place.

“Average income families with three children do not pay any personal income taxes and women with four children are lifelong exempt from paying personal income taxes,” she said, reeling off other policies designed to make parents’ lives easier, such as free textbooks and free or discounted meals most schoolchildren.

“One of our flagship projects is the so-called baby-expecting subsidy, which provides a 28,000-euro interest-free, general purpose loan for young couples, which they don’t need to pay back when the third child arrives and already have decrease as the first and second child arrives,” she continued, going on to describe a similar scheme to finance the building or purchase of homes and family cars for parents with three or more children.

As a result of it, the income of youngsters will increase by 22%.

With our comprehensive policies, we help HUNs in every phase of their lives. pic.twitter.com/A6PIH9aWgs

Despite the likelihood of the coronavirus pandemic causing a blip on the proverbial radar, Hungary’s “natalist” policies seem so far to have been a success, with Novák pointing to “a 40-year high” for marriages, “a six-decades low” for divorces, and an increase in the fertility rate of some 20 per cent since 2011 — “the highest increase in the EU.”

Asked why so many contemporary governments continue to view mass immigration as a demographic panacea, given the fact that United Nations researchers indicated long ago that “replacement migration” could not be used to make up for falling births in the West — in large part because migrants also age, necessitating ever-greater annual inflows to make up the difference — the Hungarian politician said that she had been “raising the question of why others don’t even consider the possibility of enabling childbearing” for years now.

“The pro-migration approach follows a mathematical scheme: if the population is decreasing here, then why don’t we simply fill the void by encouraging foreigners from countries with rising populations to move here? This approach is wrong because it does not deal with the long-term cultural and social consequences,” Novák insisted.

“It is about choosing the simplest way. Our task should be to raise the question: ‘Why do young Europeans decide not to have children?’ ‘How can we help them realize their family goals?’ In Hungary, and also in most of Europe, youngsters want more children than they actually have. Our task is to discover the difficulties they face and to introduce laws and family support schemes that help overcome them.”

Hungary’s Orbán: George Soros Is ‘the Most Corrupt Man in the World’ https://t.co/FRnpYcBIXE