SAITAMA, Japan (AP) – Italy is headed back to the Olympic quarter-finals. Nigeria is going home, its Olympic experience not what it wanted on multiple levels.

Nicolo Melli scored 15 points, Nico Mannion had 14 and Italy used a 14-0 run in the fourth quarter to rally and beat Nigeria 80-71 in the Group B finale for both teams on Saturday.

Achille Polonara added 13, Simone Fontecchio scored 12 and Stefano Tonut finished with 10 for Italy (2-1). The Italians trailed by eight in the fourth quarter before finding a way to win.

“I think that’s the beauty of it,” Mannion said. “That’s the fun part. If you’re not playing with any pressure, what is there to play for? It’s fun to play with that.”

The Italians will play again on Tuesday against a yet-to-be-determined opponent. They will finish either first or second in the group; the final standings won’t be decided until the Germany-Australia game later Saturday.

It’s the fifth consecutive Olympic appearance in which Italy has reached the quarter-finals, the most recent of those coming in 2004 when it won the silver medal at the Athens Games.

Chimezie Metu scored 22 points and Jordan Nwora added 20 for Nigeria (0-3). The Nigerians opened the summer with exhibition wins over the U.S. and Argentina in Las Vegas, but went no further in their first Olympic appearance under coach Mike Brown. 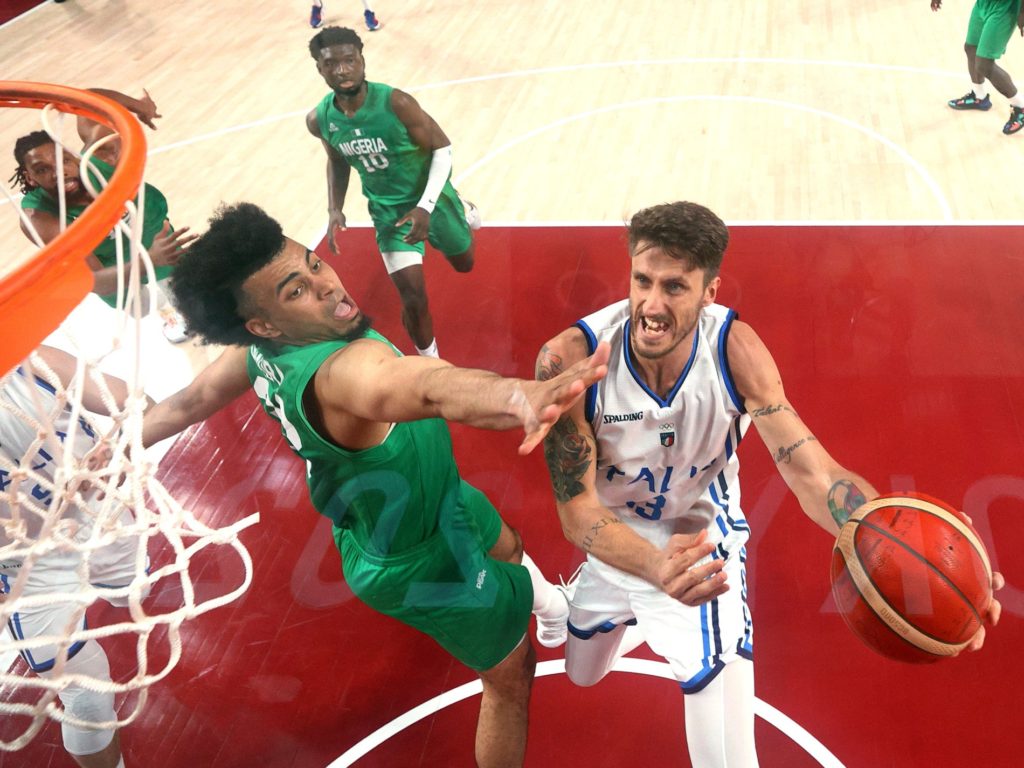 SAITAMA, JAPAN – JULY 31: Achille Polonara #33 of Team Italy goes up for a shot against Jordan Nwora #33 of Team Nigeria during the second half of a Men’s Basketball Preliminary Round Group B game on day eight of the Tokyo 2020 Olympic Games at Saitama Super Arena on July 31, 2021 in Saitama, Japan. (Photo by Gregory Shamus/Getty Images)

After the game, the 24-year-old Metu expressed frustration with the way he said the Nigerian Olympic Committee handled organizational matters for the Tokyo Games. The basketball teams sent to Saitama had difficulty obtaining proper credentials, and 10 track and field athletes from Nigeria – nearly half the country’s team – were disqualified from competing at the Olympics because the national federation hadn’t ensured they would meet minimum doping test requirements before coming to Tokyo.

“They were disqualified and they had nothing to do with it,” said Metu, who plays for the Sacramento Kings. “What there was was a lack of attention to detail and a lack of empathy for the hard work that has been put in by us athletes. … For 60-some athletes to come here and fly halfway across the world and be disrespected and humiliated by our country … it’s a lack of attention to detail by our government.” 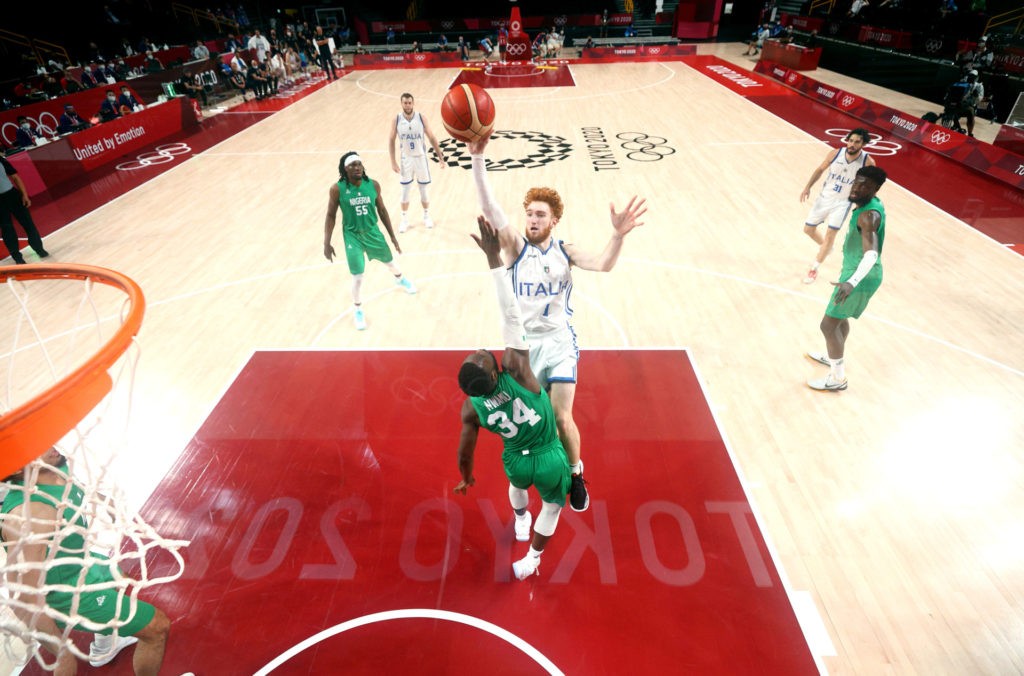 SAITAMA, JAPAN – JULY 31: Niccolo Mannion #1 of Team Italy goes up for a shot against Ike Nwamu #34 of Team Nigeria during the second half of a Men’s Basketball Preliminary Round Group B game on day eight of the Tokyo 2020 Olympic Games at Saitama Super Arena on July 31, 2021 in Saitama, Japan. (Photo by Gregory Shamus/Getty Images)

Some Nigerian athletes who said they were among those who were barred from the Olympics by the AIU protested on the streets of Tokyo this week. They held up signs claiming Nigerian sports and anti-doping authorities were responsible for them not meeting the testing criteria.

Brown said four members of his staff who made the trip to Japan — which wound up being a 30-hour ordeal instead of the planned 10-hour flight, another issue that Metu blamed on a lack of organization — were never allowed in the Olympic village because of credential and paperwork issues

“I don’t know why it is this way,” said Brown, who started a foundation earlier this year seeking financial help for the men’s basketball program. 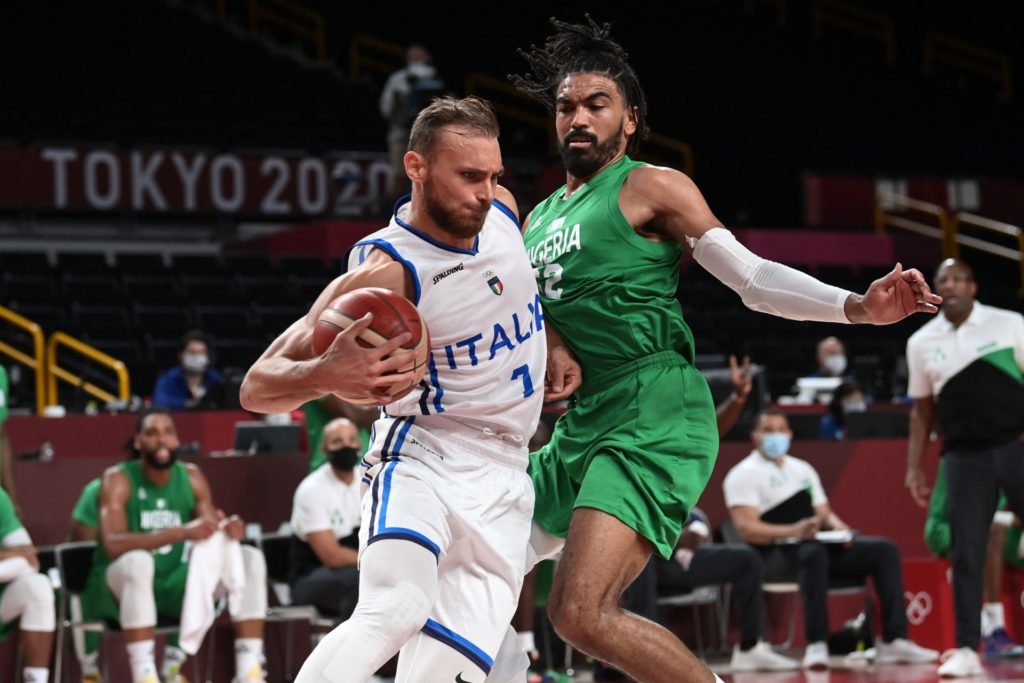 Italy’s Stefano Tonut (L) dribbles the ball past Nigeria’s Nnamdi Vincent (R) in the men’s preliminary round group B basketball match between Italy and Nigeria during the Tokyo 2020 Olympic Games at the Saitama Super Arena in Saitama on July 31, 2021. (Photo by Aris MESSINIS / AFP) (Photo by ARIS MESSINIS/AFP via Getty Images)

Nigeria led 63-56 after three quarters and saw the lead grow before play even resumed. Italy’s Michele Vitali got a technical for trying to slap the ball away before it was inbounded to start the fourth quarter, so before the 10-minute clock even started Nigeria’s seven-point lead increased to an eight-point edge.

Nigeria didn’t score for nearly seven minutes from there, and Mannion’s wide-open 3-pointer with 29.9 seconds left sealed the win for Italy. Mannion plays for Golden State; Brown is an assistant coach there, and Brown wished him well postgame. 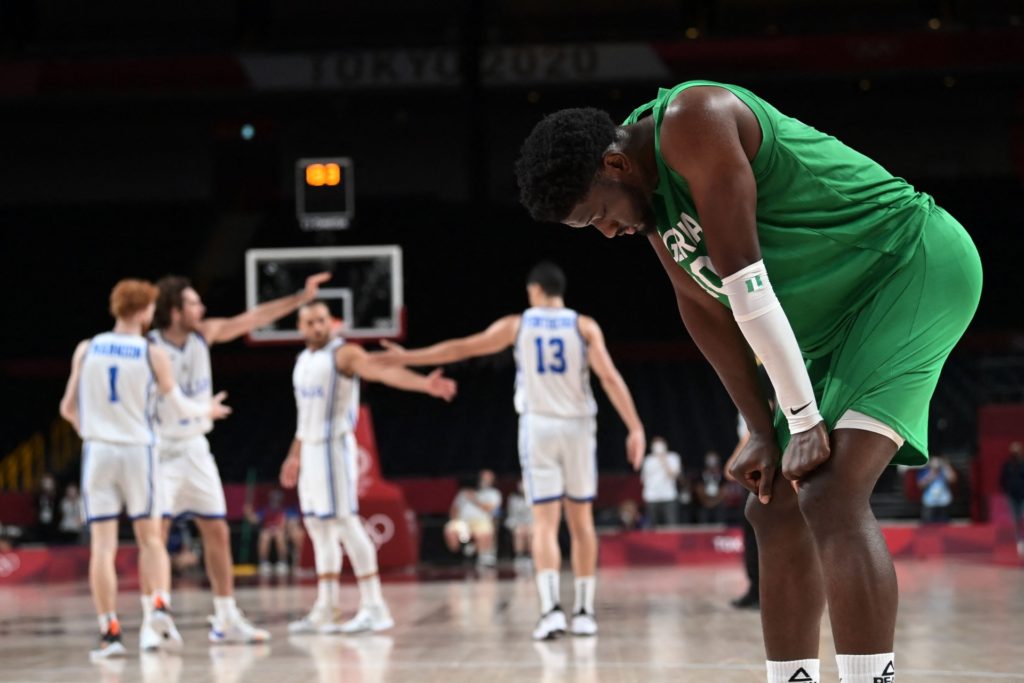 Nigeria’s Chimezie Metu reacts as Italy’s players (background) celebrate their victory at the end of the men’s preliminary round group B basketball match between Italy and Nigeria during the Tokyo 2020 Olympic Games at the Saitama Super Arena in Saitama on July 31, 2021. (Photo by Aris MESSINIS / AFP) (Photo by ARIS MESSINIS/AFP via Getty Images)