You’d think that the issue of ‘child brides’ was something on which every Western government could agree: a cruel, unjust practice which discriminates horribly against women, which effectively legitimises child sexual abuse, and which has no place in Western culture.

But the Danish parliament would beg to differ.  This week it begins the impeachment of former Immigration Minister Inger Støjberg who, it claims, violated the European Convention on Human Rights by separating asylum-seeking couples where one partner (always, inevitably, the girl) was under 18 years old.

Støjberg’s order, issued when she was Immigration Minister in 2016, was a principled decision designed to protect girls below the age of consent. It was reported at the time the underage girls all claimed that they had entered into their marriages voluntarily. But given the nature of arranged marriages, they could hardly have said otherwise — and anyway, why should Danish taxpayers be expected to fund bedrooms for migrant males to sleep with their underage brides?

A total of 23 couples were separated as a result of the order, before the policy was halted. 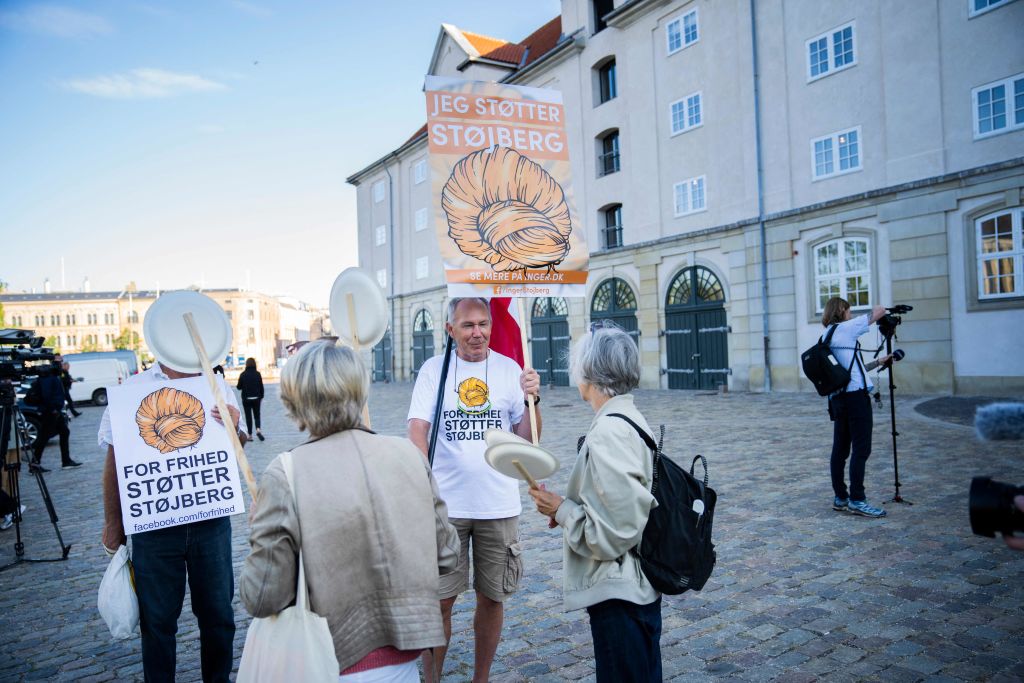 Demonstrators hold up posters in support of former Danish Immigration Minister Inger Stojberg on September 2, 2021 in front of Eigtveds Warehouse in Copenhagen, where she faces an impeachment trial over her policy of separating asylum-seeking couples who arrived in the country. – Denmark OUT (Photo by Martin Sylvest / Ritzau Scanpix / AFP) / Denmark OUT

When in February the Danish parliament voted to impeach Støjberg, she said that she had done the “only political and humane thing” to combat forced child marriages:

“Imagine arriving in a country like Denmark, a country of equality, as a young girl victim of a forced marriage, and you discover that instead of giving you the possibility to break free of your forced marriage, the state forces you to stay together in an asylum reception centre.”

But the Danish parliament appeared to be less interested in ensuring equality before the law or in protecting children than it was in appeasing local clerics such as Imam Oussama El-Saadi of the Aarhus mosque.

Even though such impeachments are extremely rare in Denmark (there have only been five cases since 1849), parliament voted overwhelmingly in favour. There are 179 members of parliament in Denmark and 139 voted to impeach, which perhaps gives an indication of how insufferably woke (or cowardly) that institution now is.

To most sane outsiders the charges being levelled against Støjberg seem impossibly flimsy:

Stojberg has been charged with illegally initiating the separation of cohabiting couples where one partner was a minor while being in the care of the Danish asylum system. She also misled parliamentary committees on four separate occasions when informing them of her decision, according to prosecutors.

Earlier reports would seem to indicate that Støjberg is essentially being prosecuted on a technicality:

Inger Støjberg gave “an incorrect or misleading description of the course of events,” the Instrukskommission, or Directive Commission, has found.

Yet if found guilty, she faces a prison sentence of up to two years.

This sledgehammer-to-crack-a-nut prosecution clearly owes more to establishment political activism than it does to the administration of justice.

Denmark generally has the most pro-border control state in Western Europe, but Støjberg’s outsider thinking and hard line on cultural issues clearly made her no friends in parliament — even in her own party.

In Denmark Ms Stoejberg is a divisive figure, but she’s also a political heavyweight with a faithful following.

“There’s the traditional, nationalistic right wing that she obviously appeals to, but there’s also almost a Trump-esque element to this,” says Mr Madsen, who points to her strong social media influence. “She’s become an anti-elite, anti-establishment figure.”

Ahead of the trial she has this week launched a new website, offering paid subscribers exclusive videos and weekly newsletters with her views on her “political struggle for Danish values”. She had sought to have the trial televised, which in Denmark does not happen.

“This is unheard of in Denmark,” says Mr Madsen. “The message that sends to me is that she’s going to be a voice in the political arena after this trial, no matter how it ends.”

When she was Immigration Minister Støjberg took a hard line, including “requiring newly arrived asylum-seekers to hand over valuables such as jewellery and gold to help pay for their stays in the country”. The establishment hated her for it and transgressions from their norm must be punished. Seem familiar?

Whatever the results of this impeachment, it will undoubtedly succeed in its underlying purpose: to prevent the inconveniently brave and principled Støjberg from ever gaining high office again; to ensure that no one else dares take such a tough line on migration.