Voter support for the Conservative Party is at its lowest since its landslide 2019 election victory, following Prime Minister Johnson breaking his manifesto pledge to not raise taxes.

The YouGov poll for The Times published on Friday also showed that the Tories had lost their lead over the main opposition party, Labour, for the first time since January.

Adults surveyed on their voting intention on September 8th and 9th — days after Johnson announced a 1.25 per cent increase in National Insurance (NI) to pay for a £12 billion a year programme for National Health Service (NHS) and social care reforms — puts the Conservatives on 33 per cent, down five per cent from last week’s poll, while Labour was in the lead at 35 per cent (up by one per cent).

The newspaper of record notes that since the beginning of the coronavirus vaccination programme, the Conservatives have experienced support of over 40 per cent, even having a lead over the Labour Party of 18 per cent in May.

Smaller parties, however, appeared to benefit from the Tory losses, with the Liberal Democrats seeing their support rise by two per cent to 10 per cent and Reform UK — formerly Nigel Farage’s Brexit Party — also increasing from two per cent to having a five per cent share of voter support. 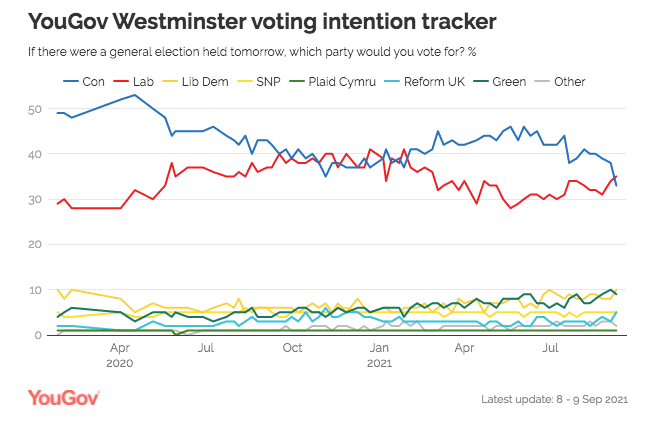 The majority, 59 per cent, said that they did not think Boris Johnson or the Conservative Party cared about keeping taxes low — undermining the position of a party that traditionally campaigns for lower taxation.

Less than a third of voters thought that the Tories or its leader cared about the NHS — a sacred institution for the major parties on the left — with YouGov’s political research director Anthony Wells remarking that “it looks as if the government may have sacrificed their reputation for low taxes amongst Tory voters without actually getting much credit for helping the NHS” — suggesting that the government’s zeal to appease left-wing supporters at the cost of traditional conservatives won them little backing.

“Ladies and gentlemen. The series has come to an end. After 149 straight Conservative leads, Labour take a lead. No doubt alarm bells are [ringing] in No 10…” remarked political scientist Professor Matthew Goodwin.

According to the poll, nearly one-in-ten Conservative voters switched to Reform UK, with the spokesman for the latter telling Guido Fawkes: “Who knew that wacking taxes up for red wall workers while simultaneously unrolling a red carpet on every beach in Kent and Sussex and threatening civil liberties like a drunken traffic warden could hurt the Tories’ polling figures. Seriously who could have guessed it?”

The Conservatives’ massive working majority of 83 seats in the House of Commons is due in large part to its victory in the December 2019 General Election, breaking down the Red Wall and taking 24 seats from Labour heartlands, particularly in the north of England, by promising to ‘level up’ other parts of the country — outside of the south and London — and to deliver Brexit, winning their largest majority since the Thatcher era.

In his victory speech on December 13th, 2019, Mr Johnson humbly acknowledged that these votes had only been “lent” to him, pledging to never take traditional Labour voters who switched allegiance for granted.

Before Wednesday’s vote, MPs from the Red — temporarily, Blue — Wall reportedly complained that the rises would hit workers in their constituencies, joining with Thatcherite and centrist One Nation Conservatives to call for a rethink on the plans.

However, few such MPs followed through in articulating their objections in the voting lobby, with just five Tories voting against and 37 not voting for the rise, which passed comfortably 319 to 248.

MPs will likely find themselves having to face the voters when they return to their constituency offices, with Cabinet ministers — likewise in small numbers reportedly challenging the prime minister’s plans — expected to be confronted by grassroots, local Tories this weekend, according to The Telegraph.

“A Conservative government raising taxes is very, very hard to take. A pandemic wasn’t written into our manifesto, but National Insurance is not a good tax because it’s a tax on jobs,” said Sir Michael Bunbury, the local party president of Suffolk Coastal, the constituency of Work and Pensions Secretary Thérèse Coffey.

Sir Michael continued: “The Prime Minister is really stressing true-blue conservatives with policies that, as a columnist, he would have ridiculed. I think we shall lose members, there will be some pretty upset people.

“A lot of my generation felt that the country was liberated post-1979 from its destination to go down the plughole. I am greatly saddened that some of that liberation, characterised by Mrs Thatcher, is being rolled back by a Conservative Prime Minister.”