Viktor Orbán drew battle lines against the Hungarian left, their international backers in the European Union and foreign press, and Big Tech in a passionate, wide-ranging speech commemorating the 1956 uprising against the country’s then-communist puppet government.

“There are moments in the lives of nations when suddenly everyone feels ‘Enough is enough, things can’t go on like this any longer.’ We have to decide, and our decision shows who we really are,” the Hungarian leader said of the Cold War-era rebellion, which saw perhaps 3,000 rebels killed and over 700 fatalities inflicted on the Soviet Communist forces in the country.

“The worth of an entire nation is revealed: it remains silent or protests; it acquiesces or rebels; it averts its gaze or stands tall; it slouches away or fights. You cannot hide, because you are confronted by the revelation of a higher truth which brooks no argument: you must either stand on this side, or over on that side. In an instant it becomes clear who is good and who is bad, who stands on the right side of history and who stands on the wrong side,” Orbán declared in his speech, a transcript of which has been seen by Breitbart London.

Prime Minister Orbán compared the 1956 uprising to the protests against the left-wing government which preceded his own in 2006, after an expletive-laden rant in which former prime minister Ferenc Gyurcsány — still a leading opposition politician and branded “the Phantom of Parliament” by his successor — admitted his party had “lied morning, noon and night” to the Hungarian people was leaked to the public. 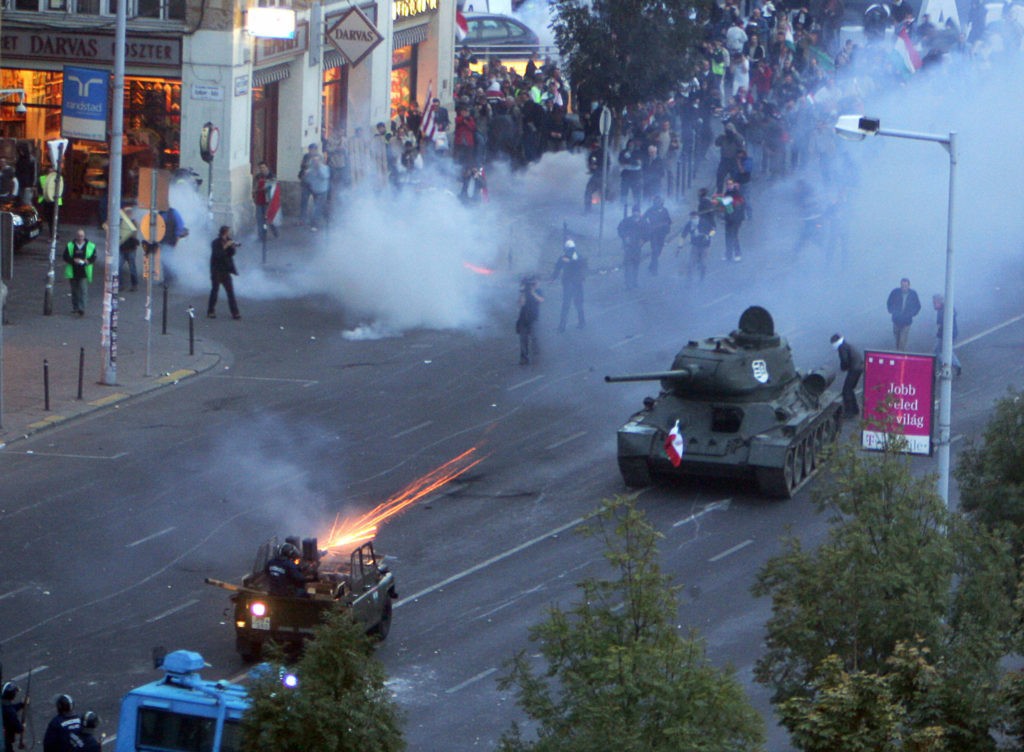 A WWII Soviet T-34 tank seized by protesters during clashes stops before riot police firing to disperse demonstrators 23rd October 2006 in central Budapest, as Hungary marked the anniversary of the 1956 anti-Soviet uprising amid the worst political divisions in the country since the end of communism. Police fired rubber bullets and several people were injured in Elizabeth Square, some two kilometres (one mile) from the parliament where official ceremonies were being held to mark the anniversary. (Photo credit should read ZOLTAN KOVACS/AFP via Getty Images)

“Their ascent to power was paid for in lies,” Orbán said of the previous socialist government.

“They bewitched us with the promise of tax cuts – and then raised taxes. Hospital fees, copayments in doctors’ surgeries, skyrocketing utility bills. They took away the 13th month’s pension and abolished family benefits. In collusion with the world of international banking they lured hundreds of thousands of families into the trap of foreign currency debt. The country was sold off, everything was sold to foreigners: airports, national energy companies, public services. And after they had looted it, they bankrupted the whole country and attached an IMF leash to our necks: ‘So you’re limping Hungary; take this hump for your back too’,” he continued.

“And when we raised our voices in protest, they responded with tear gas, with rubber bullets and with attacks by mounted police. They had people’s eyes shot out and batoned defenceless women and elderly people. Fifteen years ago, here where we stand now, the streets of Pest were soaked in violence, blood and tears. All this happened on the fiftieth anniversary of the ’56 Revolution, and was seen by the world,” he accused, recalling the 2006 protests.

“I will say this slowly, so that everyone understands: we shall never forget what they did!” 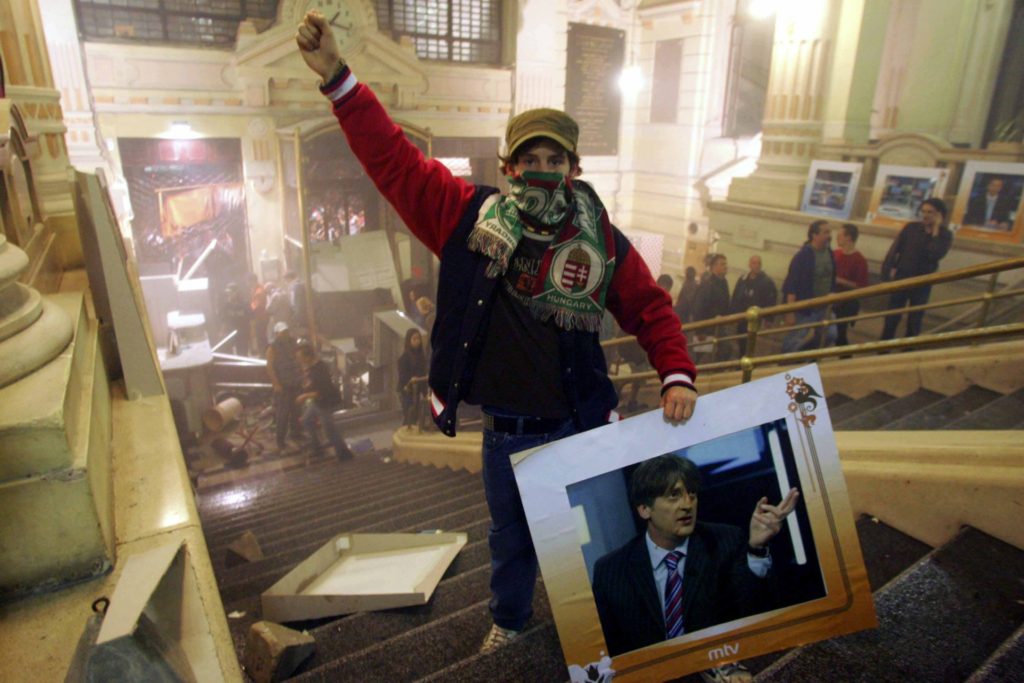 A protestor raises his fist inside the national TV headquarters on September 18th, 2006 in Budapest, Hungary. Thousands demonstrated demanding that Hungarian prime minister Ferenc Gyurcsany resign after a leaked recording in which he admitted he lied to voters about the state of public finances in order to win re-election surfaced. (Photo by Arpad Kurucz/Getty Images)

Orbán further recalled that when his party returned to government in 2010 and “scalped multinationals’ extra profits” and “sent the IMF home”, it was “attacked by the whole of the European Union.”

“And they also attacked us when we stopped the migrants, built the fence, and defended our borders. Dozens of prime ministers attacked Hungary,” he went on, touching upon the contemporary battles which are colouring the campaign which is already underway ahead of the next Hungarian national election in 2022.

“Europe’s high dignitaries are once again trying to go over our heads to make decisions about our fate, but without our consent. They would force us to be European, sensitive and liberal – even if it kills us. Today the words and actions that Brussels directs at us and the Poles are like those usually reserved for enemies,” he said, referencing the globalist bloc’s ongoing efforts to bring the two national conservative countries to heel — which have turned particularly acrimonious in Poland since the Constitutional Tribunal there ruled that EU law should not always have supremacy over the Polish constitution.

“We have a feeling of déjà vu, as throughout Europe we hear echoes of the Brezhnev Doctrine,” Orbán said, referencing the Soviet Union’s old policy of direct intervention in the affairs of its so-called satellite states, which included Hungary and Poland.

“It is time Brussels understood that we were more than a match for even the communists. We are the sand in the gears of the machinery, the stick caught in the spokes, the thorn in the flesh. We are the David that Goliath would do well to avoid,” he warned. 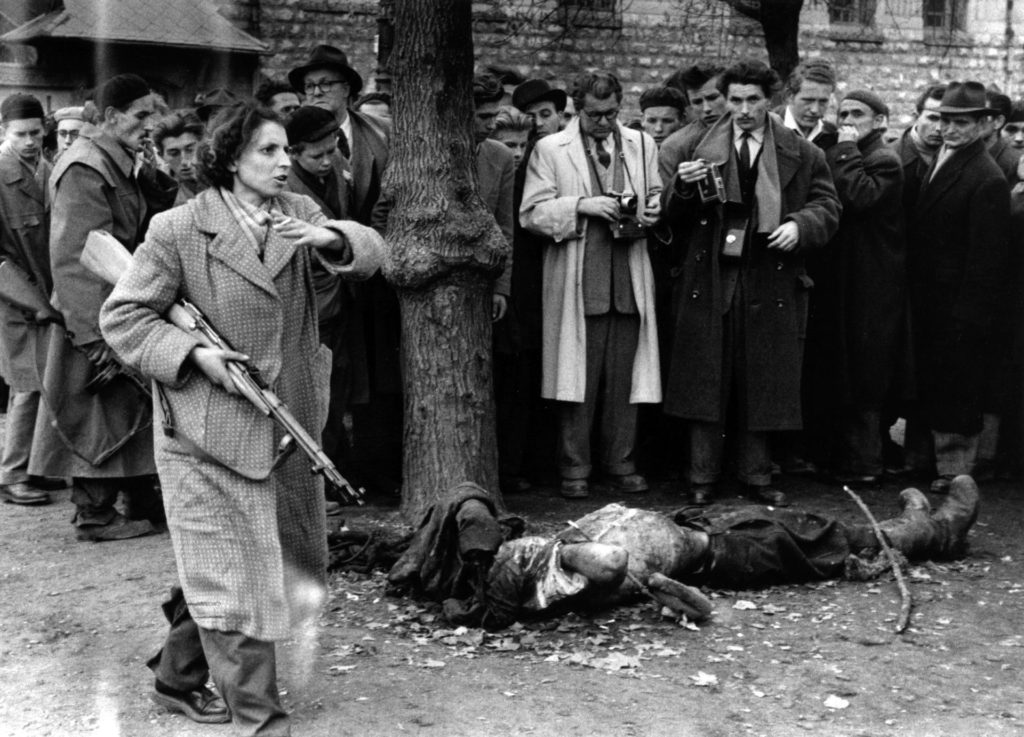 The body of a member of the Hungarian secret police lies in a Budapest street as Western journalists witness the anti-communist uprising in Hungary. Even teenagers and women took arms against the communist state, summarily executing those suspected of involvement with the state’s secret police (AVH or AVO). Amongst the crowd with his camera is photographer John Sadhovy (with moustache). Original Publication: Picture Post – 8730 – Hungary’s Last Battle For Freedom – pub. 1956 (Photo by Jack Esten/Getty Images)

With Hungary’s oppositions having all combined to try and oust Orbán’s Fidesz party next year — leftist parties joining hands even with Jobbik, a far-right outfit denounced as a “neo-Nazi party” by the President of the European Jewish Congress as recently as 2014, in order to achieve their ends — the incumbent prime minister warned voters to beware of “unity” candidates who in his view are “wolves in sheep’s clothing”.

“It is written thus: ‘Beware of false prophets who come to you in sheep’s clothing… You will know them by their fruits… every good tree bears good fruit, but a bad tree bears bad fruit.’ Indeed, on the tree of the Left the only politics that can grow is left-wing politics. There is only one Left, however many different types of stage makeup they wear. They start with lies, they continue with violence, and in their wake they leave bankruptcy,” said the conservative Christian, quoting the Book of Matthew.

Orbán further warned that “somewhere on the far side of the ‘Great Water’, Uncle George is also getting ready” — a reference to his long-time nemesis George Soros, the Hungarian-American plutocrat and mass migration advocate.

“When they should have come from over there, they didn’t; now they are here when we haven’t called them,” he said of Western politicians and activists looking to play a role in Hungary’s politics — and the West’s failure to take a stand with them against the Soviets in 1956.

“Now occupiers are not seeking to impose their commissars on us, but seeking to get them elected. Now they are not using firearms, but Facebook. I think they misunderstood us: our invitation was to liberate us from Soviet occupation, not to interfere in our democracy,” he sarcastically observed. 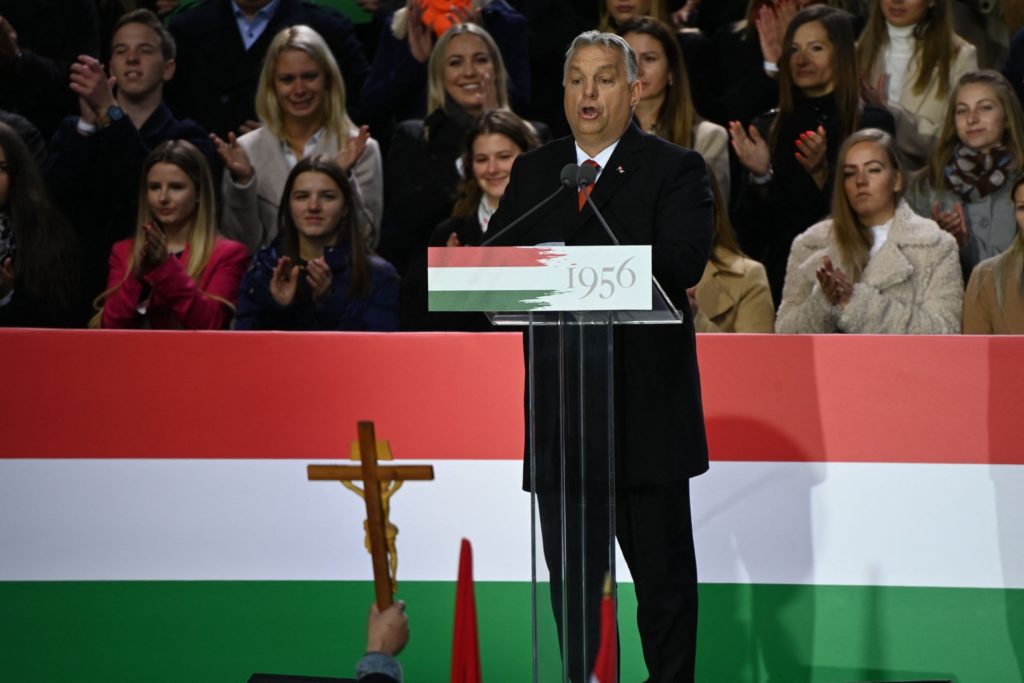 Hungarian Prime Minister Viktor Orban delivers a speech during an event in Budapest on October 23rd, to commemorate the 65th anniversary of the Hungarian uprising against Soviet occupation in 1956. Hungarians took to the streets in separate national day demonstrations to voice support for and against Prime Minister Viktor Orban. (Photo by ATTILA KISBENEDEK/AFP via Getty Images)

The theme of the Hungarian left as puppets of foreign interests in the European Union and elsewhere, much like the communist puppet government of 1956, ran right through Orbán’s speech, with the conservative leader warning supporters that, while “there are many who do not take our opponents seriously,” the “power of the international actors who are behind them” should not be taken lightly.

“They have been competing to see which of them could rule over Hungarians by the grace of Brussels and George Soros as their governor in Hungary: who could be the new pasha of Buda, the new chief of the royal council of governors, or the new party secretary-general. They openly say that to regain power they will even join forces with the devil. Their aim is to take Hungary from the hands of Mary and put it at the feet of Brussels,” he accused.

“What is powerful, what is the real challenge, and even a threat, is their international backing: the money, the media and the network behind them. This is a formidable force,” he lamented — but finished on a defiant note:

We are putting them on notice: so far those who have bitten into us have come out of it with broken or blunted teeth. Regardless of the might of the enemy, we did not run away; and neither will we back down now. 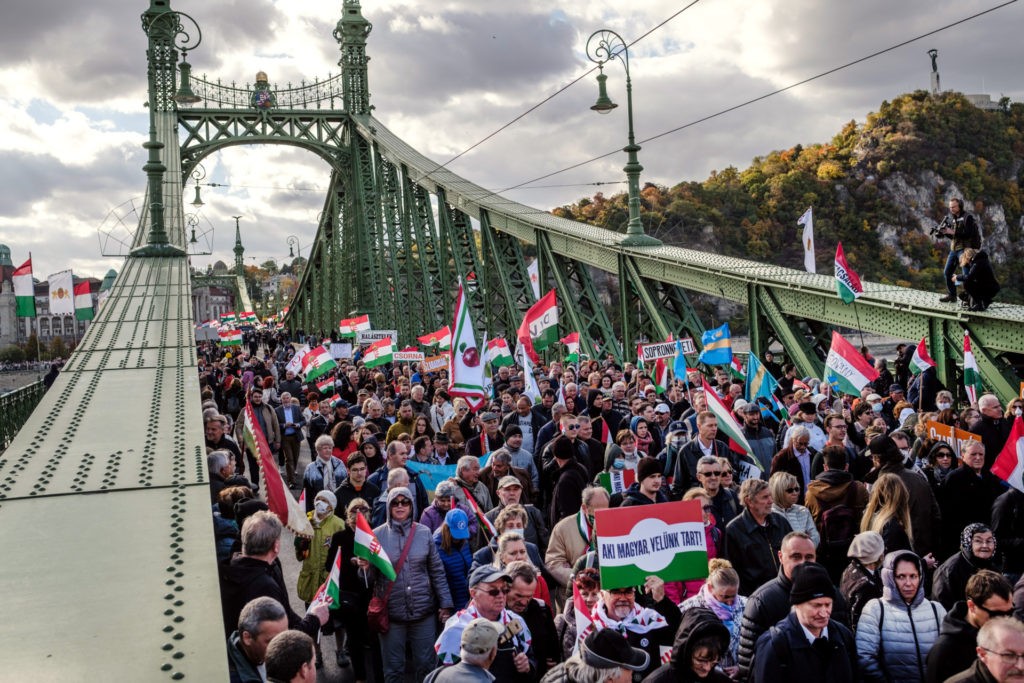 Supporters of the Fidesz party hold placards and flags during a peace march on October 23rd, 2021 in Budapest, Hungary. (Photo by Janos Kummer/Getty Images)