The Ukrainian capital of Kyiv (Kiev) was hit by rocket strikes overnight, with reports of fighting in its suburbs claimed on Friday morning.

Ukrainian foreign minister Dmytro Kuleba described the rocket strikes on the capital as “horrific”, saying the city had not suffered such an ordeal since 1941 “when it was attacked by Nazi Germany.”

“Ukraine defeated that evil and it will defeat this one. Stop Putin. Isolate Russia. [Sever] all ties. Kick Russia out of everything,” he implored.

Ukrainian president Volodymyr Zelensky made similar remarks when he addressed the nation early on Friday morning, saying Russia was operating military aircraft “treacherously over residential areas” and had bombed Kyiv.

He told Ukrainians in his address: “Terrible explosions in the morning sky over Kyiv, bombing, hitting a house, fire — all this reminds of the first such attack on our capital, which took place in 1941.”

Despite the dramatic and tragic progress of Russia’s invasion, an intelligence assessment of their actual military achievements so far by the British government claimed their successes have been limited.

Britain’s Secretary of State for Defence, Ben Wallace, said Friday morning in comments to a British television network that “Our assessment, as of this morning, is that Russia has not taken any of its major objectives.”

Noting that it was the belief of Britain’s Ministry of Defence that “the Russians intend to invade the whole of Ukraine, the nonsense they were spouting about Donbas… were not honest claims”, Wallace suggested that Russia is “behind its hoped-for timetable; they’ve lost over 450 personnel… one of the significant airports they were trying to capture with their elite Spetznaz has failed to be taken.”

Horrific Russian rocket strikes on Kyiv. Last time our capital experienced anything like this was in 1941 when it was attacked by Nazi Germany. Ukraine defeated that evil and will defeat this one. Stop Putin. Isolate Russia. Severe all ties. Kick Russia out of everywhete.

While details of the fighting in Ukraine are often confused and unclear, Western foreign correspondents’ reports and footage aired by news outlets appear to show clear evidence of bombardment.

President Zelensky has said he remains in the capital, and that “the enemy has marked me as target number one”.

“They want to damage Ukraine politically by destroying the head of state,” he said.

On Thursday, CNN broadcast footage of Russian airborne forces at an airport close by to Kyiv, which they had apparently seized in order to establish a bridgehead for further troops, engaged in a firefight with Ukrainian counter-attackers.

Ukraine’s Ministry of Defence claimed later the same day that the airport had been recaptured and the “Russian airborne force eliminated” — likely the same engagement Wallace referred to above — but the capital was evidently still under pressure as of Friday morning, with multiple reports indicating explosions and gunfire in its suburbs as of the time of publication.

CNN's @mchancecnn describes the intense firefight he witnessed at an airport outside Ukraine's capital, Kyiv. pic.twitter.com/v2I2ULOVEO

Patrick Reevell, a reporter on the ground in Kyiv for ABC, has described hearing the “sound of fighting, loud gunfire and explosions… Just a few miles north of Maidan [Square]” in the city centre, sharing video footage to corroborate his claims.

Reevell had earlier described “seeing Ukrainian troops in very heart of Kyiv hurriedly moving with ammunition to set up defensive positions”; an account matching that of CNN’s Tim Lister, who is said to have witnessed “Ukrainian security forces leave[ing] the city police headquarters with weapons & ammunition — apparently heading towards the northern district of Obolon, where fighting has been reported.”

Ukraine’s Ministry of Defence, according to The New York Times, has taken to its official Facebook page to confirm fighting is underway “in a district of northern Kyiv”, and told residents to “stay home and prepare Molotov cocktails.” 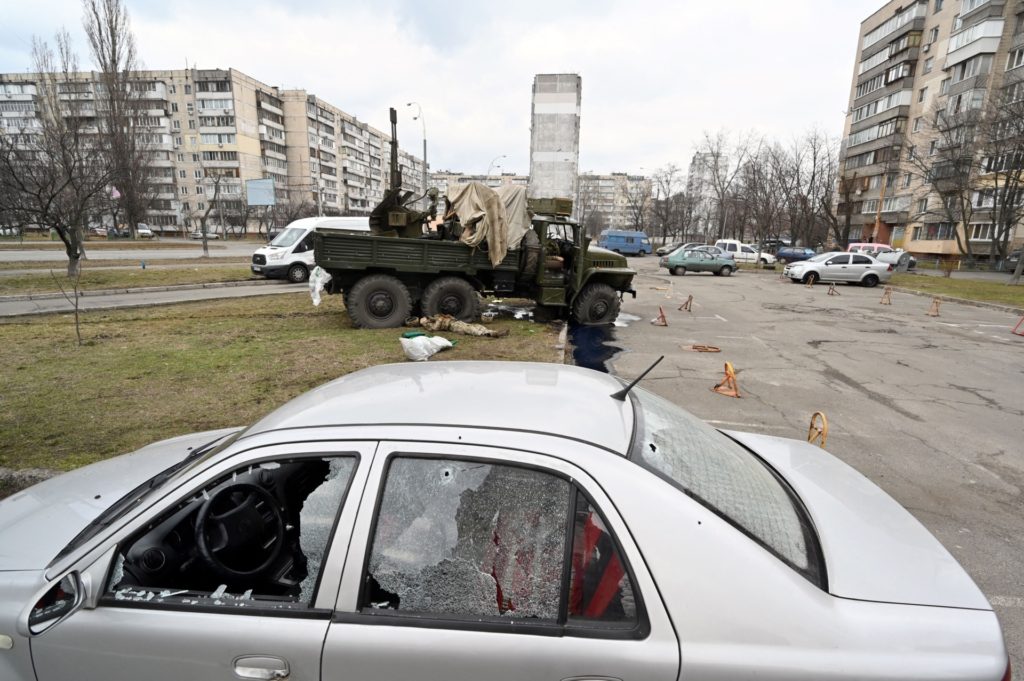 Bodies of Russian servicemen wearing Ukrainian service uniforms lie inside and beside a vehicle after their raiding party was shot during a skirmish in the Ukrainian capital of Kyiv on February 25th, 2022. (Photo by SERGEI SUPINSKY/AFP via Getty Images)

UPDATE — 11:26 A.M. EST: CNN reports: “As Russian troops advance, U.S. intelligence officials are concerned that Kyiv could fall under Russian control within days, according to two sources familiar with the latest intelligence.” Axios added: “Ukrainian President Volodymyr Zelensky told EU leaders ‘this might be the last time you see me alive’ during a video conference on Thursday night, two European sources briefed on the call tell Axios.” Zelensky is also to have said that he is Russia’s “number one target” but has vowed to remain in Ukraine’s capital, according to the Washington Post.