Australia is sending “lethal aid” to Ukraine to help it repel Russia’s invasion, with Canberra adding a warning Sunday for its own citizens to stay away from the fight.

The Australian Financial Review (AFR) reports the aid could include heavy weapons, as well as light arms and ammunition, to be channelled through NATO.

While the heavy munitions Australia pays for are likely to be sourced and supplied by NATO nations, primarily the U.S. and the United Kingdom, there may also be some role for the Australian Defence Force to help deliver humanitarian aid to the region.

The AFR points out Australia is one of several countries, including Canada, Germany and the Netherlands, to step up their support for Ukraine by pledging lethal aid on top of humanitarian assistance.

Prime Minister Scott Morrison did not commit to publicly disclosing Australia’s full commitment when he previewed the final decision expected as soon as Tuesday.

“The extent of what we announce will also be subject to national security considerations,” he said. “But the lethal aid support sees us step up again together with the rest of the world. 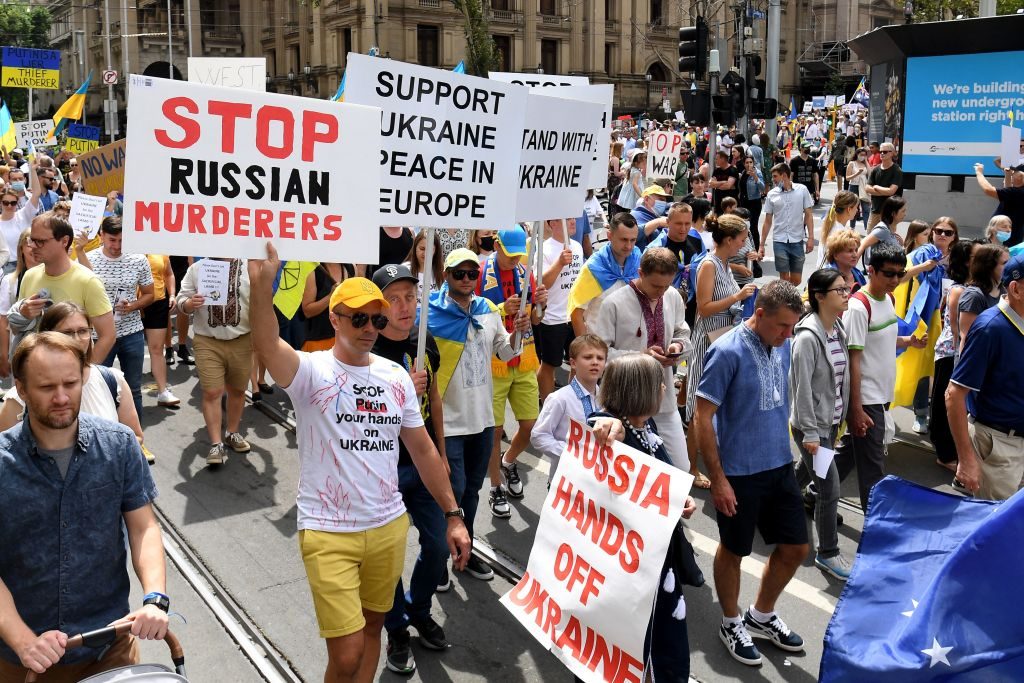 People attend a march to protest against the Russian invasion of Ukraine, in Melbourne on February 27, 2022. (WILLIAM WEST/AFP via Getty Images)

“I am pleased that we are seeing an accelerating and increasing strength of response from Western democracies in standing up against what is thuggish brutality for which there’s no justification.”

Even as Australia sends military backing it is warning its own citizens not to head to the conflict.

The Guardian reports some 20 unidentified people have contacted Ukraine’s embassy in Australia to express an interest in joining the fight against Russia.

But the embassy says it is warning those people to “check Australian legislation”, after Morrison also cautioned citizens against travelling to the conflict zone in Ukraine even as the UK said yes to its own citizens.

Morrison said the government’s clear advice to all Australians was not to travel to Ukraine, and said the legalities of whether citizens could join a mooted foreign legion were “unclear”.

“Our law sets out arrangements where people can be involved in official activity by a sovereign state, which Ukraine obviously qualifies for, but the nature of these arrangements are very uncertain,” the conservative coalition leader said.

Under the Criminal Code, it is an offence for an Australian to enter a foreign country with the intention of engaging in hostile activity, unless it is done as part of “the person’s service in any capacity in or with the armed forces of the government of a foreign country”.

By contrast, the UK foreign secretary, Liz Truss, said on the weekend that British citizens who wanted to join the fight in Ukraine would “absolutely” have her support.