Gun stores in Canada have seen handguns fly off the shelves, with many selling out altogether after Prime Minister Justin Trudeau announced gun control legislation freezing all pistol purchases.

In what appears to be a seismic political misfire, Canadian gun stores have been reporting a massive surge in handgun sales after the country’s leftist prime minister, Justin Trudeau, announced that he would be implementing gun control laws totally freezing the import and sale of this class of firearm.

Many shops in the country have now reportedly sold out of pistols entirely, despite extremely restrictive laws already in place in the country which can make the purchase of a handgun onerously difficult.

According to a report by the AFP, every gun store owner who spoke to the agency openly derided Trudeau’s declaration that he would ban the sale of handguns, while also saying that they had all seen a massive surge in pistol sales since he made the announcement last week. 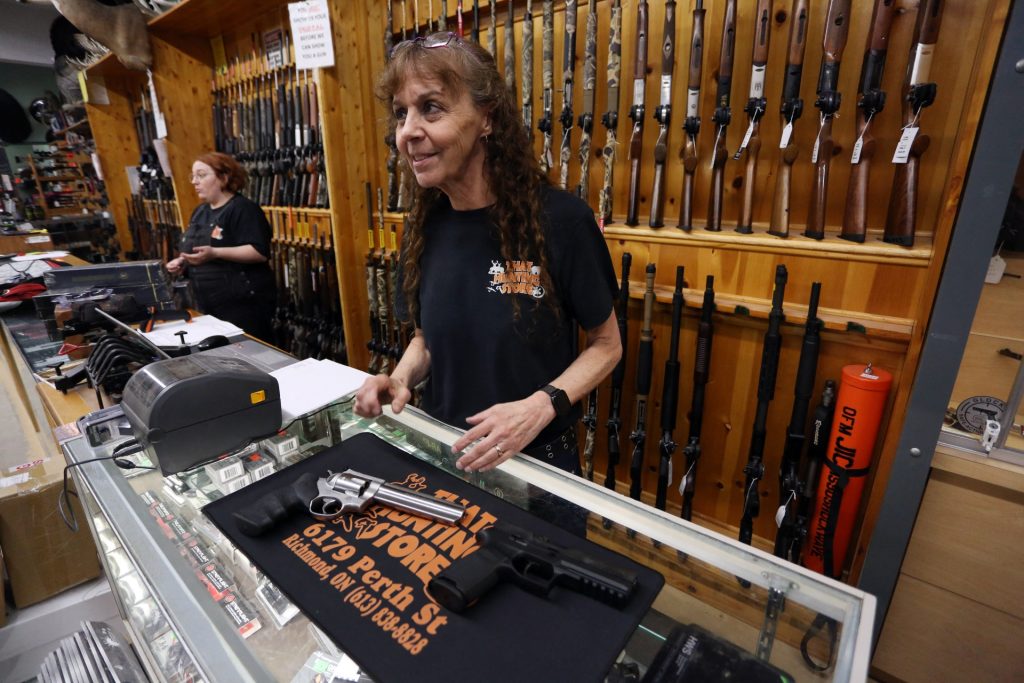 Jen Lavigne, co-owner of That Hunting Store, speaks with customers on June 3, 2022 in Ottawa, Canada. – Canadians rushed to buy handguns this week, after Prime Minister Justin Trudeau announced on May 30, 2022, a proposed freeze on sales in the wake of recent mass shootings in the US. “Sales have been brisk,” said Lavigne. “We sold 100 handguns or almost our entire stock in the last three days since the prime minister announced the freeze,” she said. (Photo by DAVE CHAN/AFP via Getty Images)

“We sold 100 handguns, or almost our entire stock, in the last three days, since the Prime Minister announced the freeze,” said the co-owner of That Hunting Store, Jen Lavigne, before emphasising that the ban would only “hurt legal gun owners”.

Another shop owner, Josko Kovic of DoubleTap Sports, said that the Liberal Party leader’s announcement had “created a panic” and that “people are now rushing out to buy handguns”.

“Almost all stores are sold out, including me,” Kovic noted, with the AFP also reporting that many gun stores saw lines out the door only hours after Trudeau’s anti-gun declaration, and that many sold their entire stock of handguns within a matter of days.

Canadian Prime Minister Justin Trudeau has introduced a new bill to parliament that would stop the import, purchase and sale of handguns. https://t.co/usNj5V7ZaN

The surge in pistol sales occurred in Canada despite the fact that this class of firearm is extremely difficult to buy in the country, requiring would-be owners to obtain multiple character references and signatures from their partners, on top of obtaining a licence and passing a stringent background check.

According to a Newsweek article on the matter, handgun owners are also compelled by law to register their newly acquired firearms with the local police before even being allowed to take the weapon home.

However, none of these draconian restrictions seem to be enough for Justin Trudeau, who announced that he had brought new legislation to Parliament which would totally freeze the sale and import of pistols in all Canada.

“What this means is that it will no longer be possible to buy, sell, transfer or import handguns anywhere in Canada,” the leftist Prime Minister said, while seemingly using mass shootings in the United States to justify the ban.

Trudeau also claimed that while “gun violence is a complex problem”, the “math” of the issue shows that “the fewer the guns in our communities, the safer everyone will be”.

This is despite the fact that Chicago in the United States operated a handgun ban from 1982 until 2010 and only saw homicide numbers rise within this period of time.

Police Net Dozens of Illegal Firearms Including AK-47 over a Month in 'Gun-Free' UK https://t.co/Tzvzxr1rWY