The International Monetary Fund (IMF) published a paper Wednesday that warned of dark, troubled economic times ahead when the world can expect to have less of everything except “social instability.”

The paper, authored by IMF Managing Director Kristalina Georgieva, was released as G20 ministers and central bank governors gather in Bali, Indonesia, to chart the next 24-months of global financial performance.

Georgieva, a former CEO of the World Bank and European Union (E.U.) commissioner, outlined the first problem is rising inflation which delivers punitive taxation without legislation.

Biden’s inflation is a “tax on all Americans” as prices rise to a high not seen in over 40 years, Republicans said on Wednesday following the release of the Bureau of Labor Statistics’ latest Consumer Price Index.

She makes clear “Inflation is higher than expected and has broadened beyond food and energy prices. This has prompted major central banks to announce further monetary tightening—which is necessary but will weigh on the recovery. Continuing pandemic-related disruptions—especially in China—and renewed bottlenecks in global supply chains have hampered economic activity.”

It is going to be a tough 2022—and possibly an even tougher 2023, according to the Washington, DC, based organization with increased risk of recession on a global scale that will usher in an age of austerity and denial.

The way to strangle inflation is through tighter controls.

The IMF goes on to caution “Most central banks will need to continue to tighten monetary policy decisively. This is especially urgent where inflation expectations are starting to de-anchor. 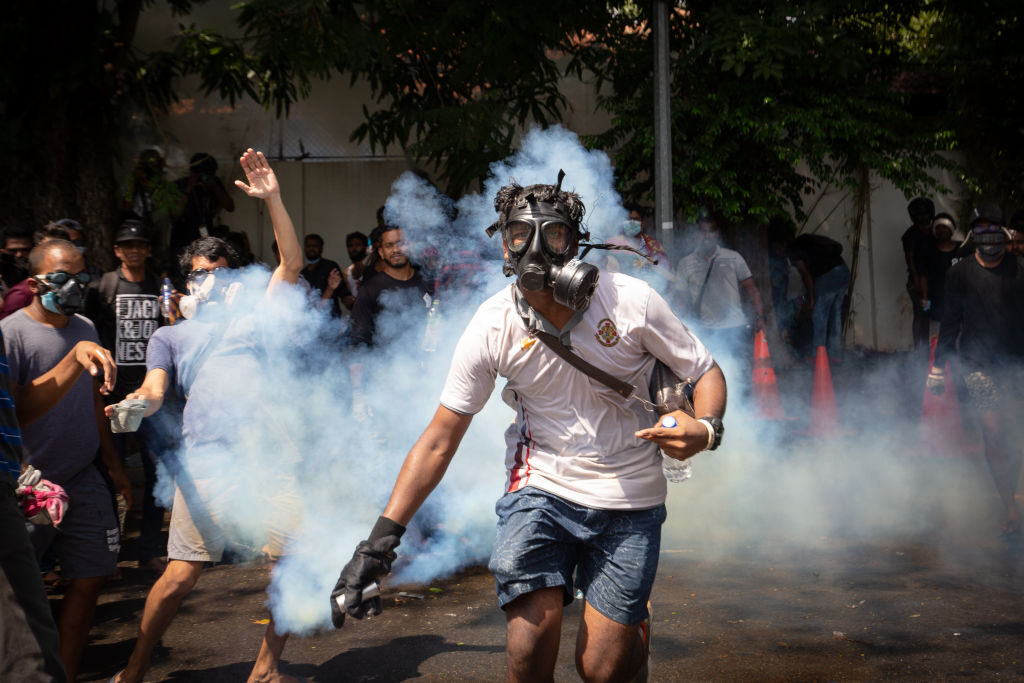 A protester wearing a gas mask runs to throw a tear gas canister fired by army personnel during a protest amidst the ongoing economic crisis on July 13, 2022 in Colombo, Sri Lanka.  (Abhishek Chinnappa/Getty Images)

“Without action, these countries could face a destructive wage-price spiral that would require more forceful monetary tightening, with even more harm to growth and employment.”

The I.M.F. sees a strong role for G20 nations in charting the world’s economic future, with a call for wealthy nations to help fund their needy neighbors. It urges:

To avoid potential crises and boost growth and productivity, more coordinated international action is urgently needed. The key is to build on recent progress in areas ranging from taxation and trade to pandemic preparedness and climate change. The G20’s new $1.1 billion fund for pandemic prevention and preparedness shows what is possible, as do recent successes at the World Trade Organization.

Most urgent of all is action to alleviate the cost-of-living crisis, which is pushing an additional 71 million people into extreme poverty in the world’s poorest countries, according to the United Nations Development Programme . As concerns over food and energy supplies increase, risks of social instability are rising.

To avoid further hunger, malnutrition and migration, the world’s wealthier countries should provide urgent support for those in need, including with new bilateral and multilateral financing, especially through the World Food Programme.

The IMF sees itself playing a role in transferring wealth, arguing it has a new Resilience and Sustainability Trust to “provide $45 billion in concessional financing for vulnerable countries—aimed at addressing longer-term challenges such as climate change and future pandemics.”

Ultimately the IMF wants to coordinate the fight against higher food prices now being felt acutely as food accounts for a higher share of income.

“Inflation, fiscal, debt and balance of payments pressures are all intensifying,” the IMF concludes, before issuing a call for “the international community to come up with bold measures to support their people.”

Activists are pressuring banks to stop investing in fossil fuels in the name of stopping “climate change" as gas and oil prices soar. https://t.co/G80RqaGAme

Wednesday’s report is the second time this year the IMF has warned of future unrest.

Amid warnings of starvation and “Hell on Earth” migrant crises over a lack of food, the international finance body has predicted growth across the world will be negatively affected, with poorer nations in particular to feel the brunt of the ongoing crisis.