Actively religious people are much more likely than those who are less religious to describe themselves as “very happy” according to a new poll by the Pew Research Center.

Similarly, in Japan, those who are religiously active are significantly happier than the religiously inactive and the unaffiliated, with 45 percent, 34 percent, and 31 percent respectively being “very happy.”

The trend linking greater happiness to more active religious practice held good for a remarkable 19 nations out of the 26 nations surveyed, Pew found, and where the pattern did not hold, the differences were minimal.

Pew found no clear connection between religiosity and health, however. In only three countries out of the 26 surveyed did religiously active people describe themselves as being in “very good” overall health significantly more than the religiously inactive or unaffiliated. 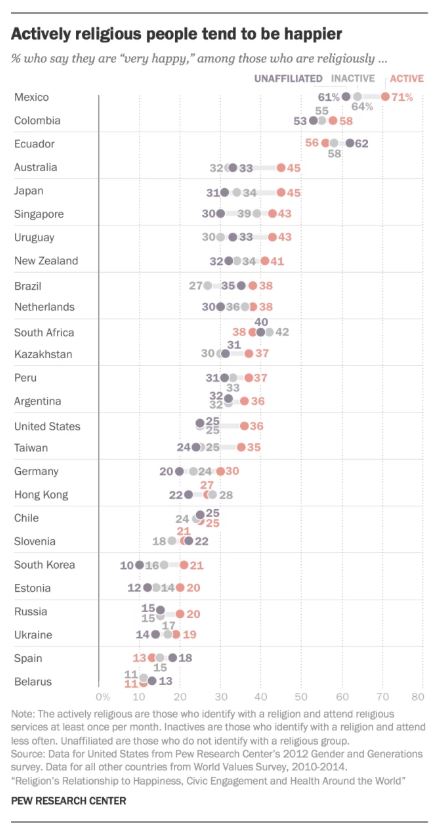 A 2014 study by the Austin Institute for the Study of Family and Culture found a strong correlation between religiosity and personal happiness, with those who attend religious services on a weekly basis nearly twice as likely to describe themselves as “very happy” (45 percent) than people who never attend (28 percent).

Conversely, those who never worship are twice as likely to say they are “very unhappy” (4 percent) as those who attend services weekly (2 percent), that study revealed.

Out of three religious indicators employed — self-reported “religiosity,” religious “affiliation,” and service attendance — the latter showed a significantly greater correlation to increased happiness. The study showed that higher levels of church attendance “predict higher life satisfaction,” even after accounting for how important religious faith is in people’s lives.

Church attendance also has a documented positive effect on children and education.

According to sociologist Robert Putnam, “a child whose parents attend church regularly is 40 to 50 percent more likely to go on to college than a matched child of non-attenders.”

Children involved in a religious organization “take tougher courses, get higher grades and test scores, and are less likely to drop out of high school,” which means they also have better employment prospects, Putnam declared in his book Our Kids: The American Dream in Crisis.

Religious youth have better relations with their parents and other adults, more friendships with high-performing peers, and are more involved in sports and other extracurricular activities, Putnam found.