ROME — Pope Francis reiterated his belief Friday that a multilateral and globalist approach to geopolitics is the key to world peace.

“Trust in dialogue between people and between nations, in multilateralism, in the role of international organizations, in diplomacy as an instrument for comprehension and understanding, is indispensable for building a peaceful world,” the pontiff said in a video-message recorded in the company of António Guterres, Secretary General of the United Nations.

The back-to-back messages underscored the deep agreement between the two leaders regarding the importance of streamlining migration, combatting climate change, and eliminating nuclear weapons.

“It is necessary to recognize ourselves as members of a single humanity and take care of our earth that, generation after generation, has been entrusted to us by God in custody so that we cultivate it and leave it in inheritance to our children,” Francis said. “The commitment to reduce contaminating emissions and for an integral ecology is urgent and necessary: ​​let us do something before it is too late.”

As on other occasions, the pope pointed to young environmentalists such as Greta Thunberg as leaders who will show the world the way.

“Let us listen to the voice of so many young people who help us become aware of what is happening in the world today,” Francis said, “and who ask us to be sowers of peace, and builders — together and not alone — of a more humane and more just civilization.”

The pope also pointed to a series of injustices in the world today that demand a unified response from men and women of good will. 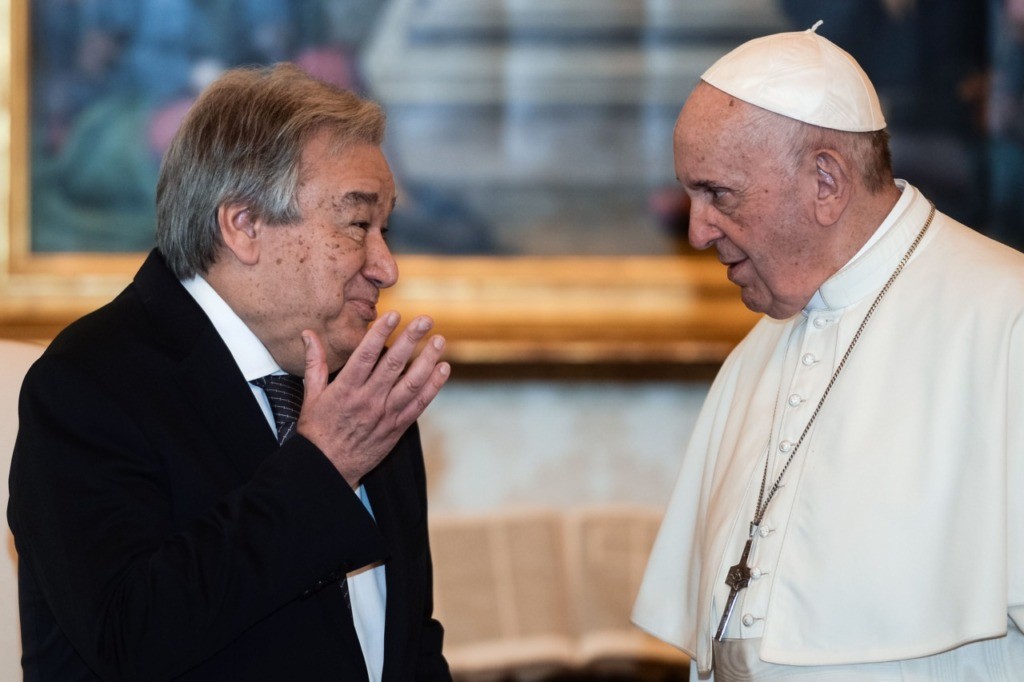 Pope Francis (R) talks with Secretary-General of the United Nations, Portugal’s Antonio Guterres during a private audience on December 20, 2019 in the Vatican. (Photo by Filippo MONTEFORTE / POOL / AFP) (Photo by FILIPPO MONTEFORTE/POOL/AFP via Getty Images)

“We cannot close our eyes to our brothers who, because of conflicts and violence, of misery or of climatic changes, leave their countries and often go to meet a sad fate,” he continued. “We cannot remain indifferent to the human dignity trampled and exploited, to the attacks against human life, whether of the unborn or of any person in need of care.”

The pontiff also denounced both violations of religious liberty as well as the abuse of religion as an excuse for violence, before going on to condemn the possession of nuclear arms.

“We cannot, nor should we look the other way when in many parts of the world believers of different religious denominations are persecuted,” he said. “The use of religion to incite hatred, violence, oppression, extremism and blind fanaticism, as well as using it to force exile or marginalization cries out to God.”

“But the arms race and nuclear rearmament also cry out to God,” he insisted. “And it is immoral not only to use but also to possess nuclear weapons, which have such a destructive capacity, that even the mere danger of an accident represents a dark threat to humanity.”

“Let us not remain indifferent to the many wars that are still being fought and see so many innocents die,” he said.

For his part, Mr. Guterres had nothing but praise for the pope, saying that he exemplified the spirit of the United Nations and calling him a “messenger for hope and humanity.”

“Your clear moral voice shines through,” he told the pontiff, “whether you are speaking out on the plight of the most vulnerable, including refugees and migrants, confronting poverty and inequalities, appealing for disarmament, building bridges between communities, and of course highlighting the climate emergency through your historic encyclical Laudato Si.”

“These messages coincide with the core values of the United Nations charter, namely to affirm the dignity and worth of the human person,” he said.

“Coming to Rome from the COP25 in Madrid,” Guterres said, “I call on all countries around the globe to commit to carbon neutrality by 2050 in line with what the scientific community tells us is necessary to rescue the planet.”