Observers shoveled abuse upon the unfortunate spectacle, rivaling each other to come up with the most appropriate epithets to describe the appalling scene.

“Mummified Mary,” “Weeble Jesus” (after the ovate children’s toys launched by Hasbro in the 1970s), “Martians,” “toilet paper rolls,” and “astronauts” were some of the comparisons made to the cylindrical figures meant to represent the Holy Family, the Magi, and the shepherds at Bethlehem.

Others saw in one ominous figure the helmeted image of “the Mountain” from the Game of Thrones television series, while another conjured up memories of the Robot from Lost in Space:

A sneak peek at the Vatican Nativity. Official unveiling tomorrow. Looks like some car parts, kid toys, and an astronaut. pic.twitter.com/4ZeBkf1Huy

As one irate Italian wrote on social media of the Vatican manger scene, “Ugliness is the first thing you notice, followed by a lack of familial warmth and the distancing guaranteed by the cylindrical figures. If you wish to judge harshly, the cylinders call to mind the sacred poles of Satanic cults condemned in the Bible.”

Traditionally, a manger scene is intended to evoke feelings of piety and devotion — not pity and revulsion — over the birth of Jesus in Bethlehem, and thus this particularly regrettable work offends not only aesthetic sensibilities, but also the religious reverence of the faithful.

The Vatican said the Nativity scene exhibited in St. Peter’s Square was created by the students and faculty of the FA Grue Art Institute, a state-run high school for design, which in the decade of 1965-1975 devoted its scholastic activity to the theme of Christmas.

“We believe that this year’s experience of a Nativity scene donated by an Artistic High School is really a powerful summons for everyone to invest more in the training of the new generations both at the level of middle and high schools and for the university world,” said Bishop Lorenzo Leuzzi in a statement guaranteed to garner broad consensus. 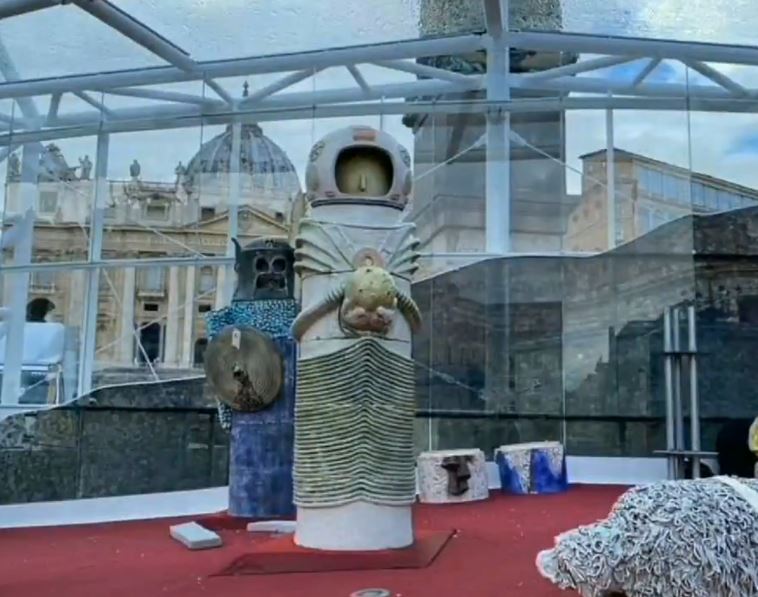 Elizabeth Lev, an American art historian living and teaching in Rome, told Breitbart News she thinks the choice was a poor one.

“The Nativity celebrates the Incarnation, God who comes into the world as flesh, not in a totemic form,” Dr. Lev declared. “At the end of this extremely difficult year people are looking for beauty, for something to elevate, inspire, and unite them, and the scene offered in Saint Peter’s Square gives them something else altogether.”

“The misshapen figures in the Nativity scene lack all the grace, proportion, vulnerability, and luminosity that one looks for in the manger scene,” she said. “The entire point of this holiday is the second person of the Holy Trinity taking human form, born as a baby of flesh and blood, and there is nothing particularly human about the forms we see before us.”

“Context is also important and these works are surrounded by Bernini’s majestic colonnade, capped with the monumental figures of the saints, with Saint Peter’s Basilica in the background containing a thousand years of beautiful statuary,” Lev continued.

“It has been a dark year and many have had their faith challenged. Perhaps it would have been better to give them a symbol to rally round rather than an object of mockery,” she said. “This scene leads people to heap derision upon an icon representing the Holy Family. It is unfortunate we couldn’t find something to inspire at least tenderness if not full-on reverence.”

Moreover, Lev concluded, “In the context of last year’s polemics over the Pachamama statue, it seems ill considered to use images that will confuse people and further a sense of division.”