ROME — Pope Francis said Tuesday every war “marks a surrender of the human capacity to protect” while denouncing the Russia-Ukraine war as “absurd.”

Speaking with a group of volunteers of the Italian National Civil Protection Service in the Vatican, the pontiff praised their work, highlighting their humanitarian assistance and “the reception in Italy of refugees from Ukraine, especially women and children fleeing from this absurd war.”

“Thank you for what you have done and continue to do, in silence. Good deeds do not make noise, but they build up the world,” the pope said.

“Never again war!” Francis said, while calling the Ukraine war a “denial of what is written in the solemn commitments of the United Nations” as well as stressing “the sacred right of peoples to peace.” 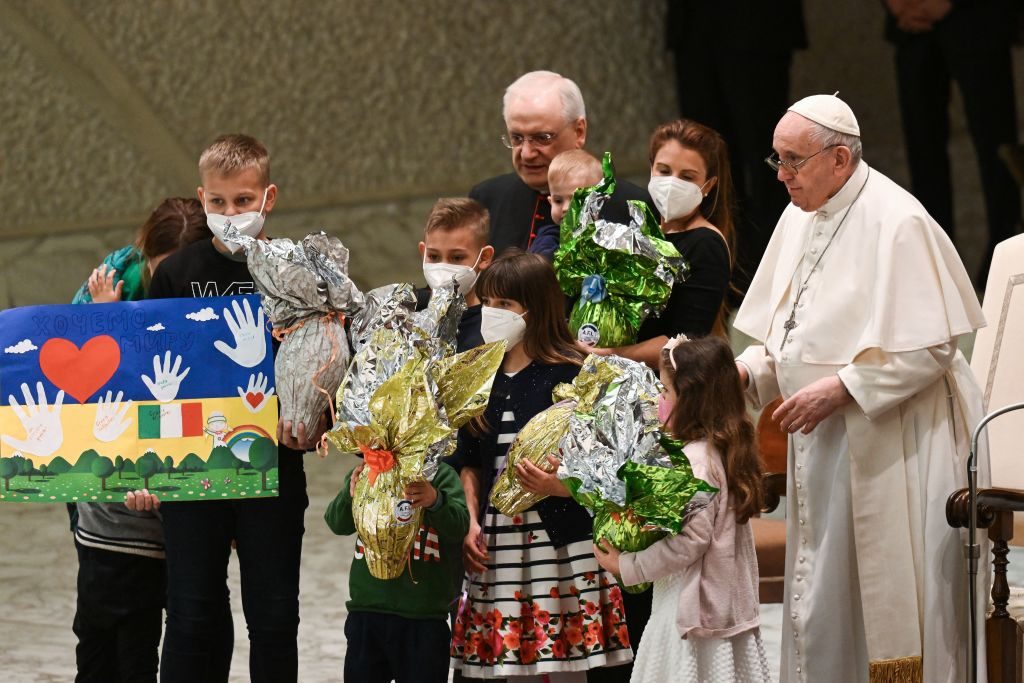 Pope Francis poses with refugees from Ukraine, one holding a drawing with the inscription “We Want Peace” (L) and holding Easter eggs during the weekly general audience on April 6, 2022 at Paul-VI hall in The Vatican. (ANDREAS SOLARO/AFP via Getty Images)

“The emergencies of these years, linked to the reception of refugees fleeing from wars or climate change, remind us how important it is to encounter someone who extends a hand, who offers a smile, who dedicates time freely,” he said.

Francis has criticized the war from the outset but has shied away from placing the blame firmly on either side, preferring a more diplomatic tack in his comments.

As evidence, Allen cited a May 2 interview in which Francis “suggested that the conflict may have started due to ‘the barking of NATO at Russia’s door.’”

Pope Francis: "The time has come to abolish war, to erase it from human history." https://t.co/ydRUUroX2a

“Francis has been photographed kissing a Ukrainian flag from Bucha, the site of alleged war crimes, but he won’t name ‘Russia’ or ‘Putin’ as the aggressors,” Allen observed.

In the interview, Pope Francis said he could not say whether the possible expansion of NATO “provoked” Putin, but he wondered if it “perhaps facilitated it.”