ROME — The streets of Rome were deserted the day before Palm Sunday, wiped antiseptically clean by fears of the coronavirus and, even more, of draconian measures instituted by the state to keep citizens confined to their homes.

The following photos were all taken during a one-and-a-half-hour period on Saturday between 12:30 p.m. and 2:00 p.m. on a warm sunny day at a time of year when tourists and pilgrims would have normally flooded Rome to take advantage of Holy Week festivities and delightful weather.

Instead, Rome is bereft of tourists while citizens cower in their homes for fear of being spotted on the street without a compelling reason to satisfy law enforcement. Rome’s mayor, Virginia Raggi, boasts on social media of the number of stops made and fines issued by the police force. This journalist was detained for ten minutes by police officers near the Trevi Fountain while his self-certification and identification were verified, processed, and recorded.

Ms. Raggi has also set up a website so that citizens can rat out their neighbors if they spy them going out to walk the dog for a second time in the same morning or going to visit a church without also visiting a tobacconist, newspaper stand, grocery store, or another motive better than simply wishing to talk to God.

The few people one does encounter on the streets have the lower part of their faces hidden behind masks and quickly avert their gazes as if mere eye contact could convey a viral contagion or give cause for a fine and police record. Wishing a passerby a good day is generally met with stony silence, although on occasion, a neighbor will utter a quiet grunt by way of reply.

Initially, Romans accepted the lockdown with good-natured resignation, inventing flash mobs from balconies and playing music out of their windows. Now, in week four of the national quarantine, the weight of confinement, combined with severe economic concerns, have brought the people of Rome to their knees.

The following photographs testify both to the stunning architectural and natural beauty of the Eternal City and to the tragic emptiness that now afflicts the cityscape. Despite the fact that fewer than 5 of every 10,000 residents of Rome have tested positive for the coronavirus, a blanket policy of complete suppression of economic and cultural activities has reduced the population to fearful paralysis: 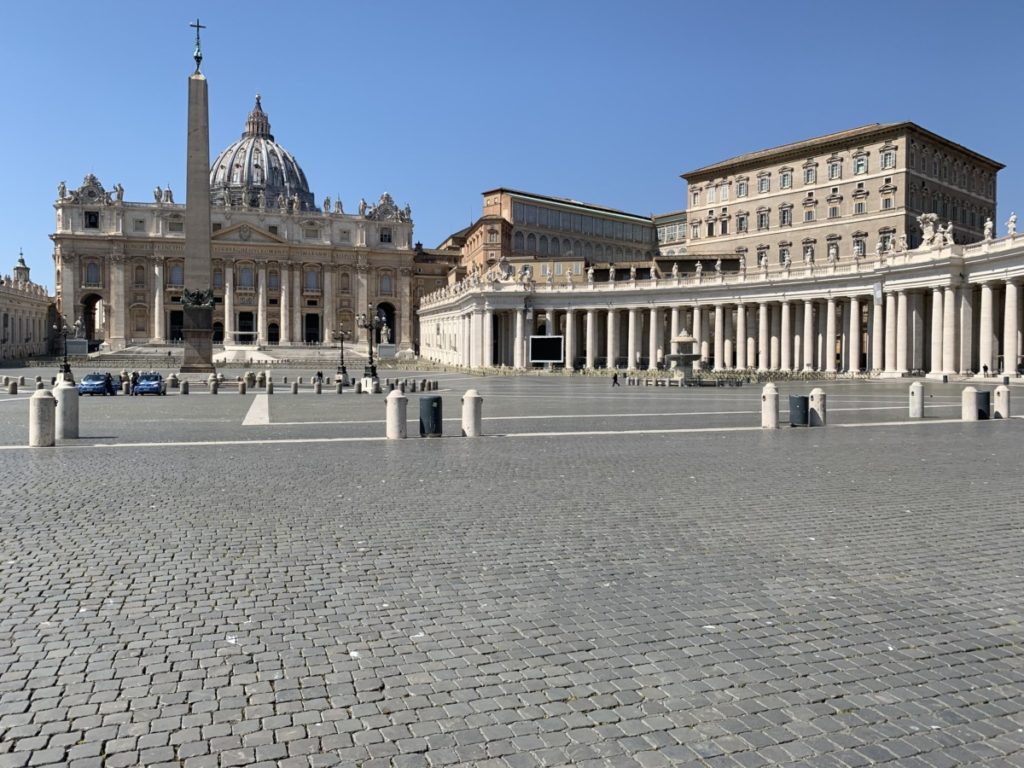 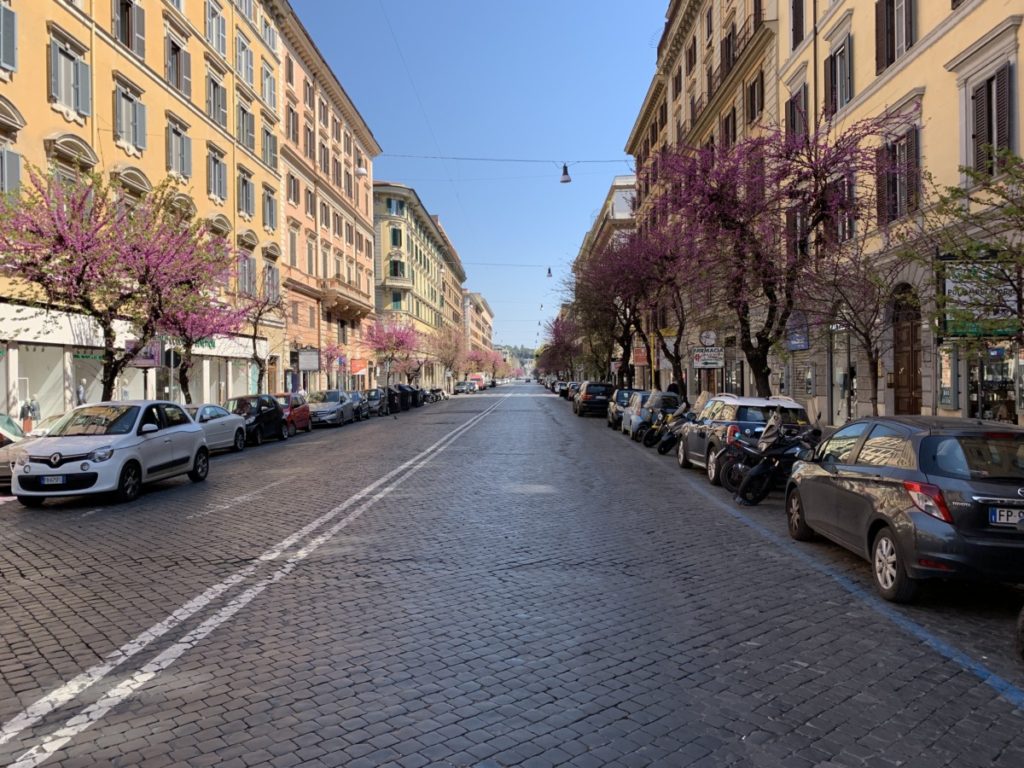 Via Cola di Rienzo, a tony shopping area bedecked with spring buds but bereft of people. 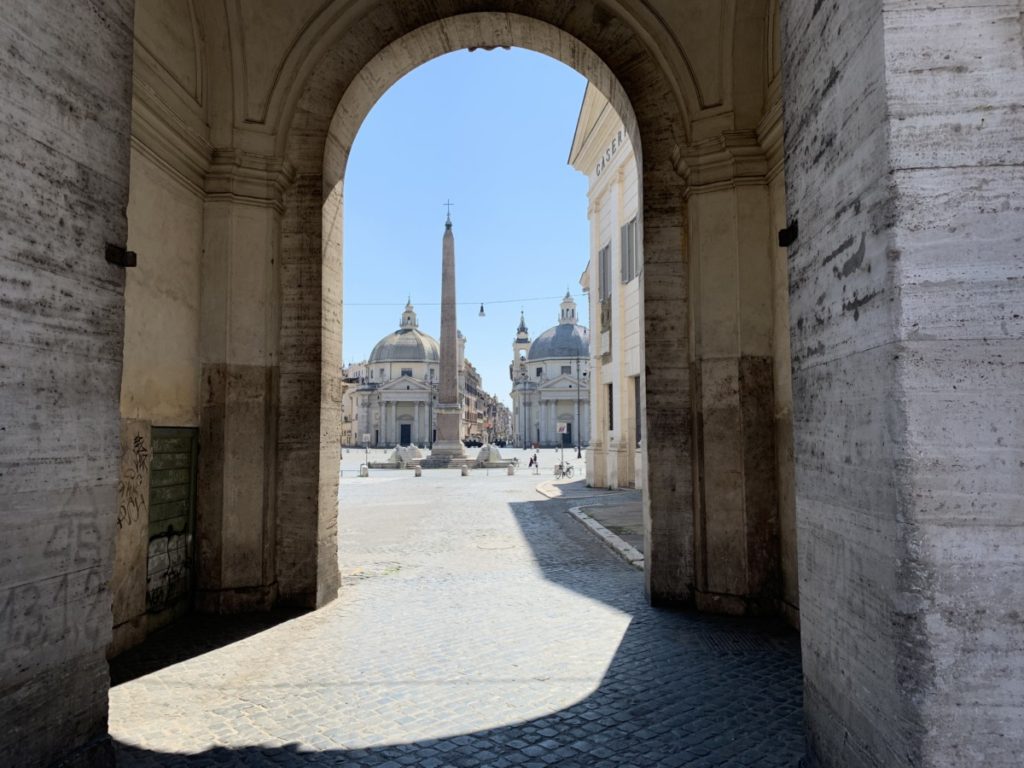 The northern entrance to Piazza del Popolo, the first vision medieval pilgrims would have had of the city. 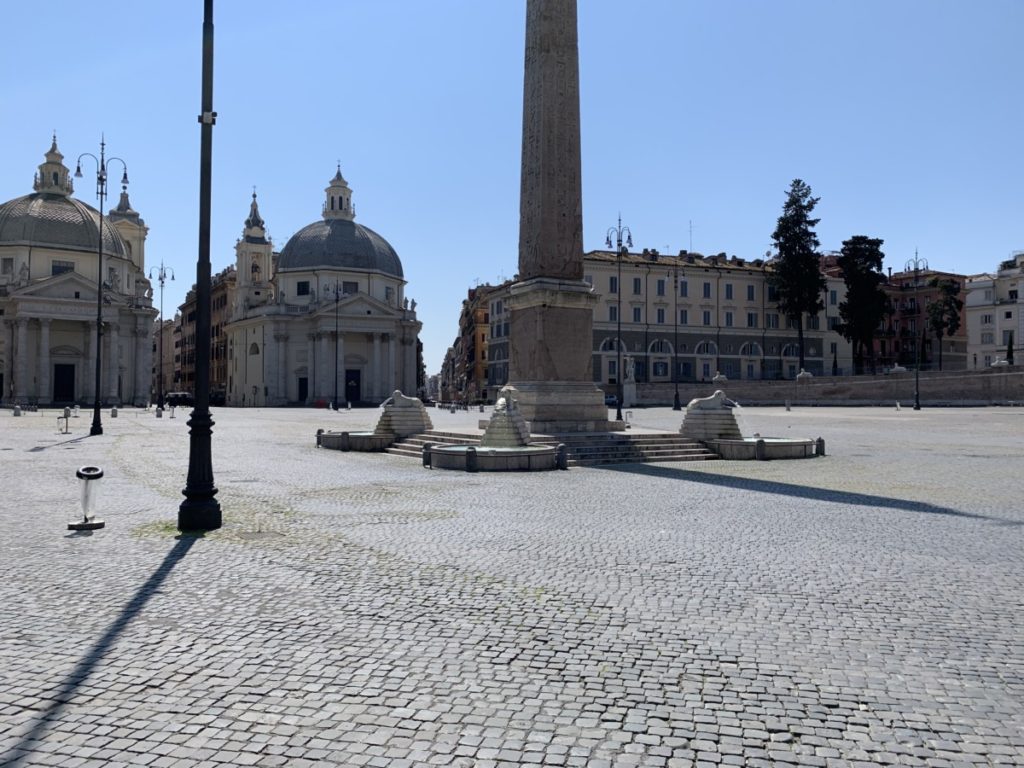 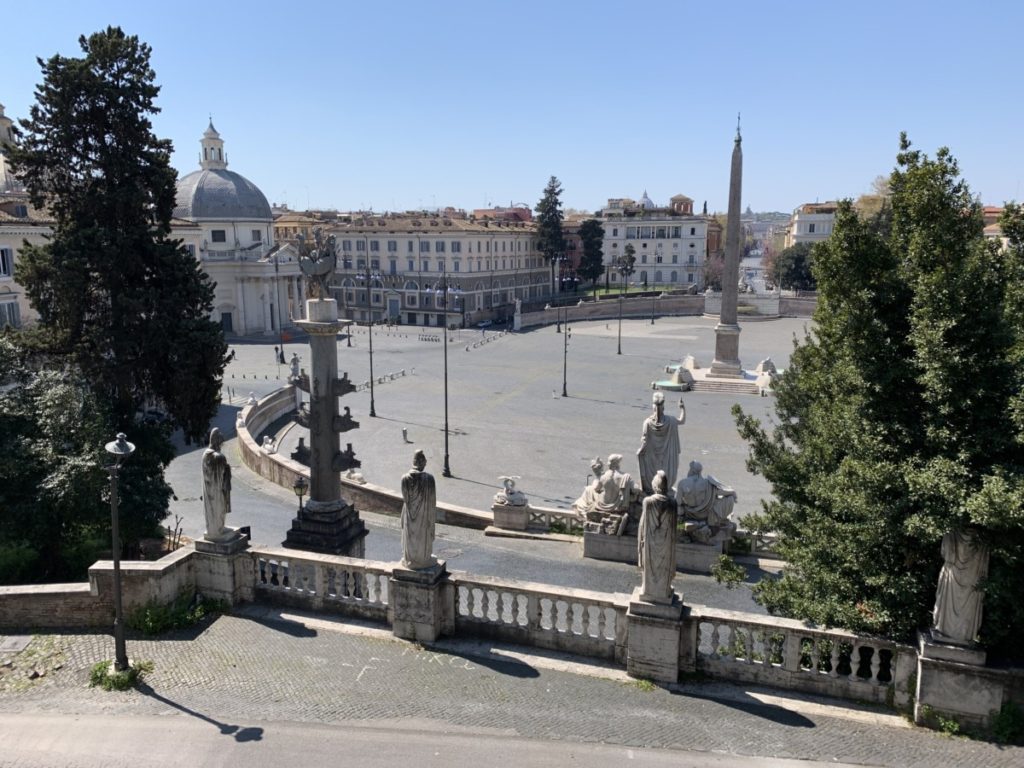 Looking down on Piazza del Popolo. 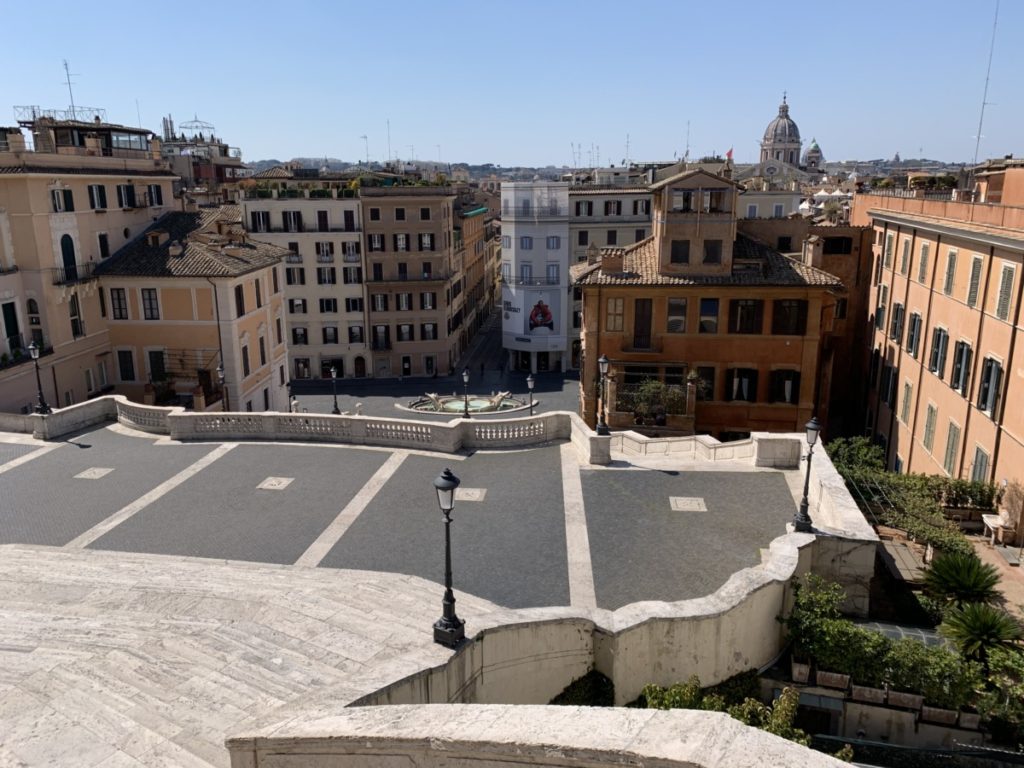 Gazing down on the empty Piazza di Spagna from Trinità dei Monti. 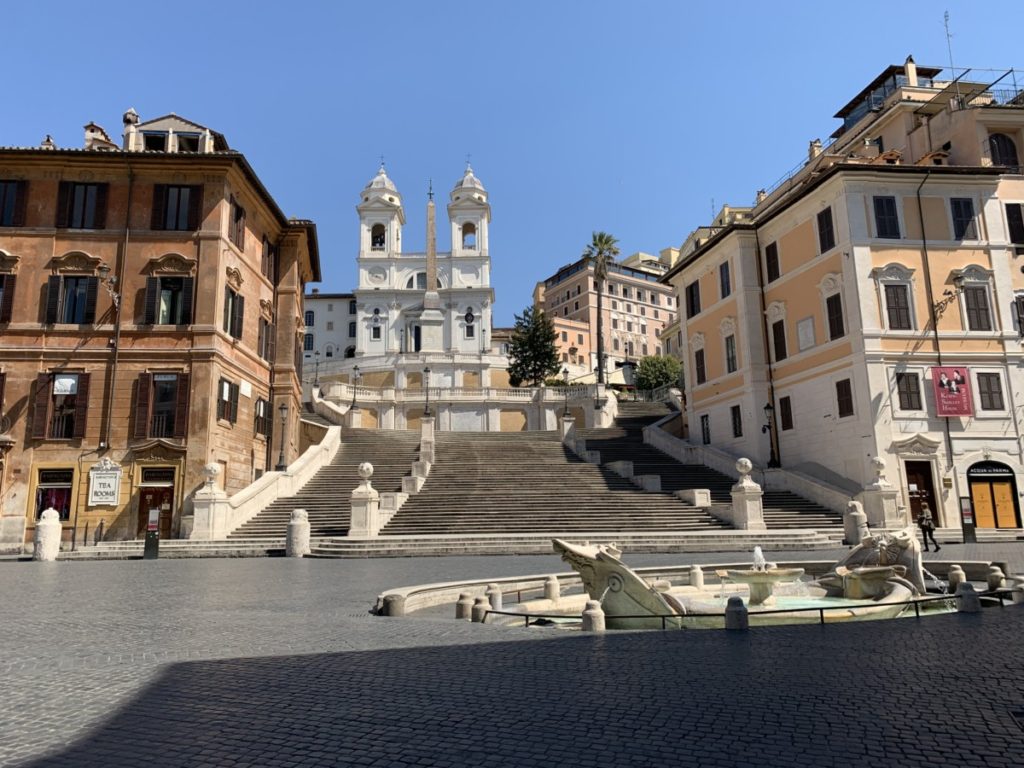 The glorious Piazza di Spagna and the Spanish Steps. 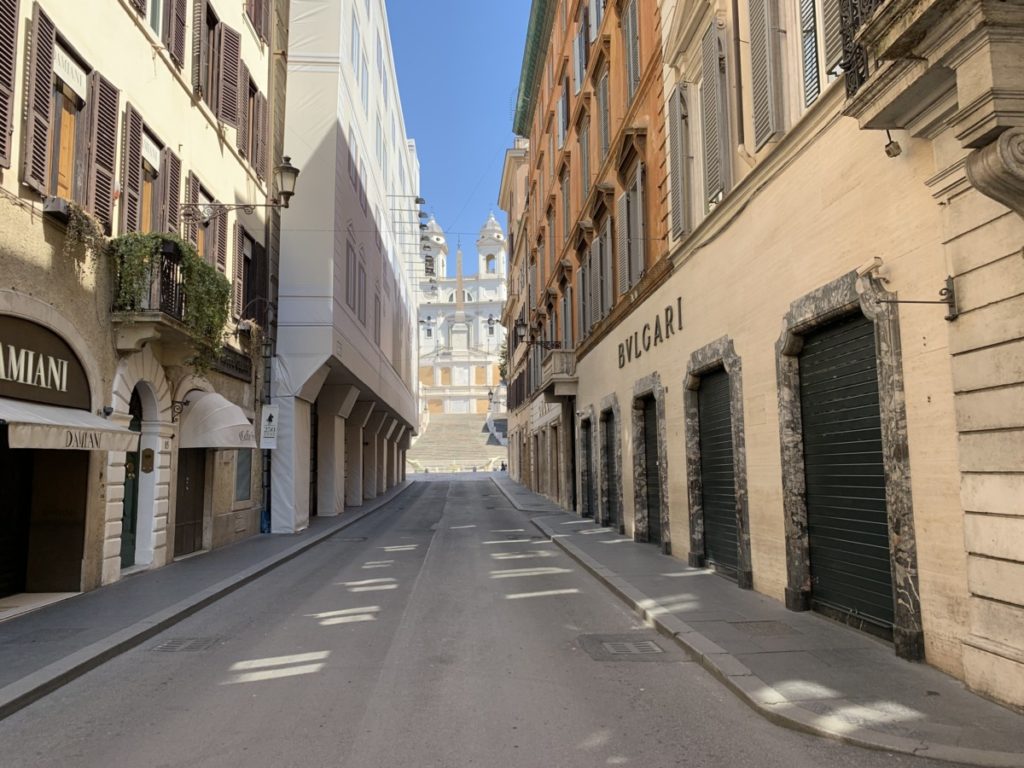 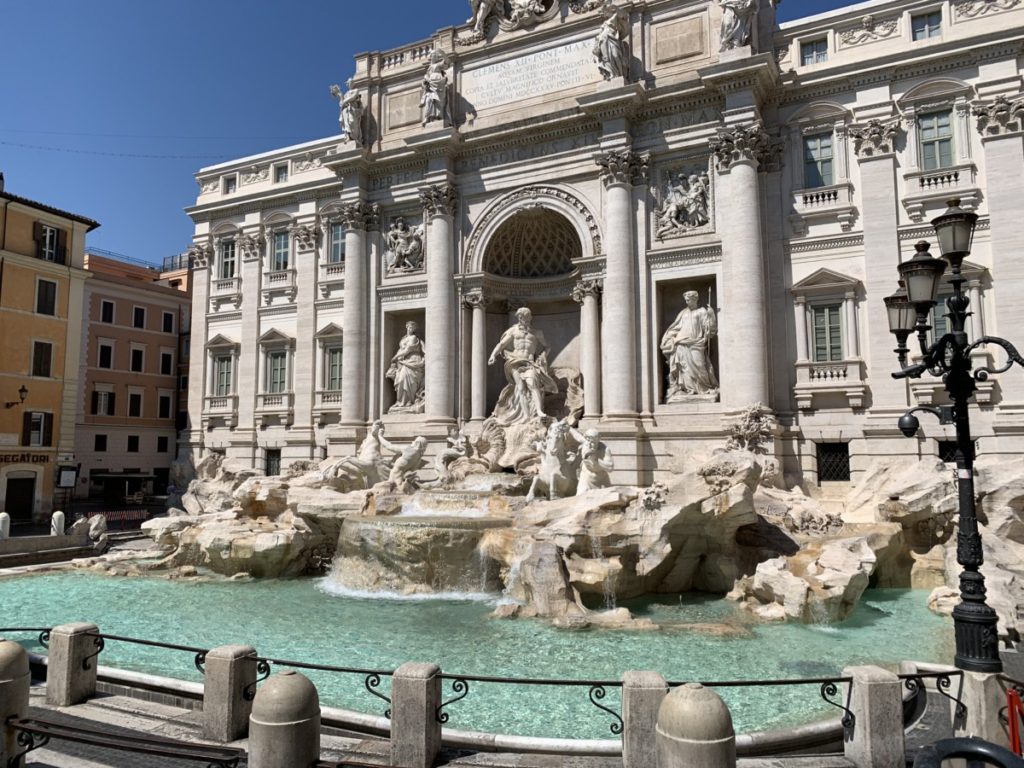 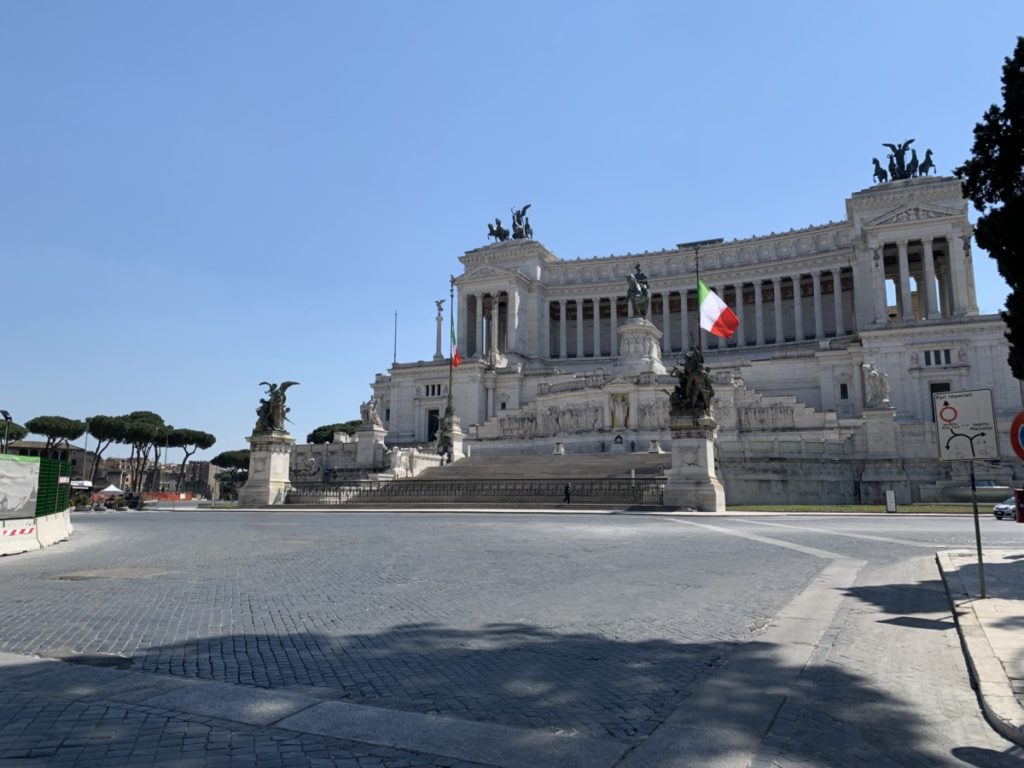 The Piazza Venezia and the Victor Emmanuel monument. 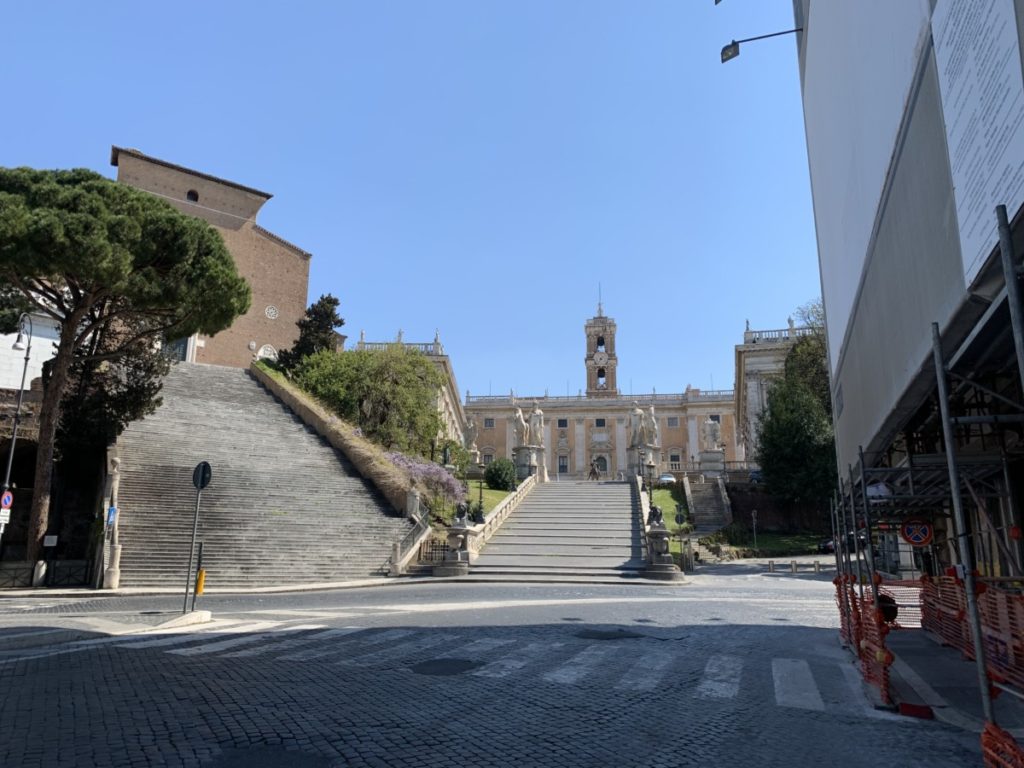 The Capitoline Hill, one of the seven hills of Rome. 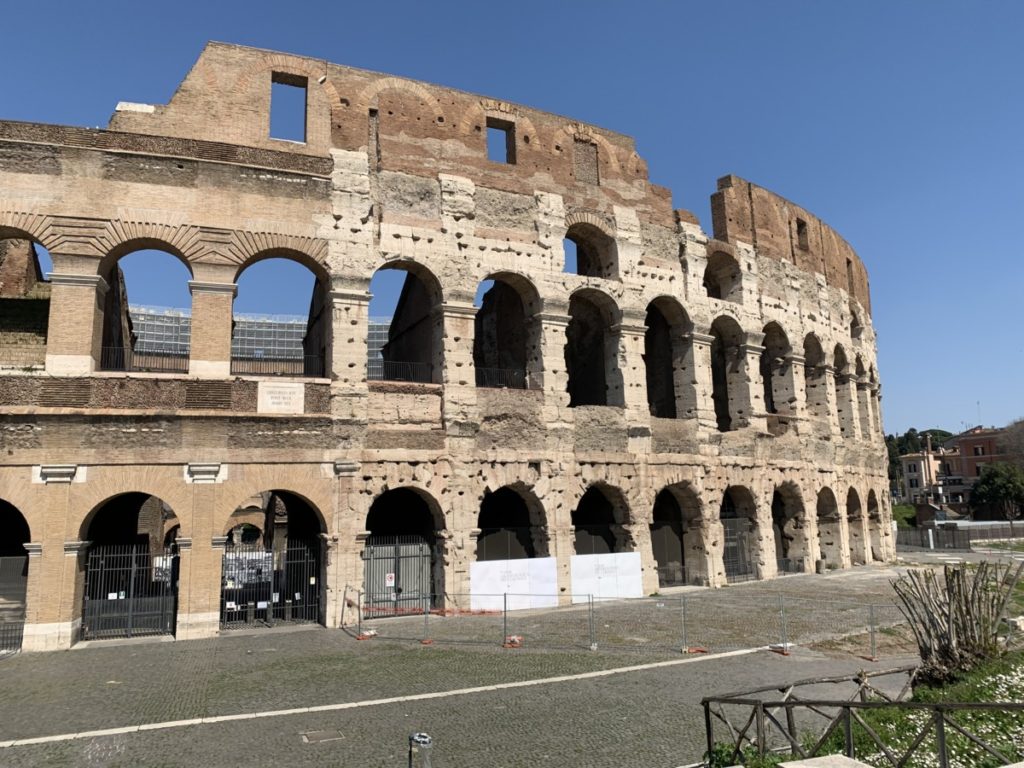 An empty Flavian Amphitheatre, also known as the Roman Colosseum. 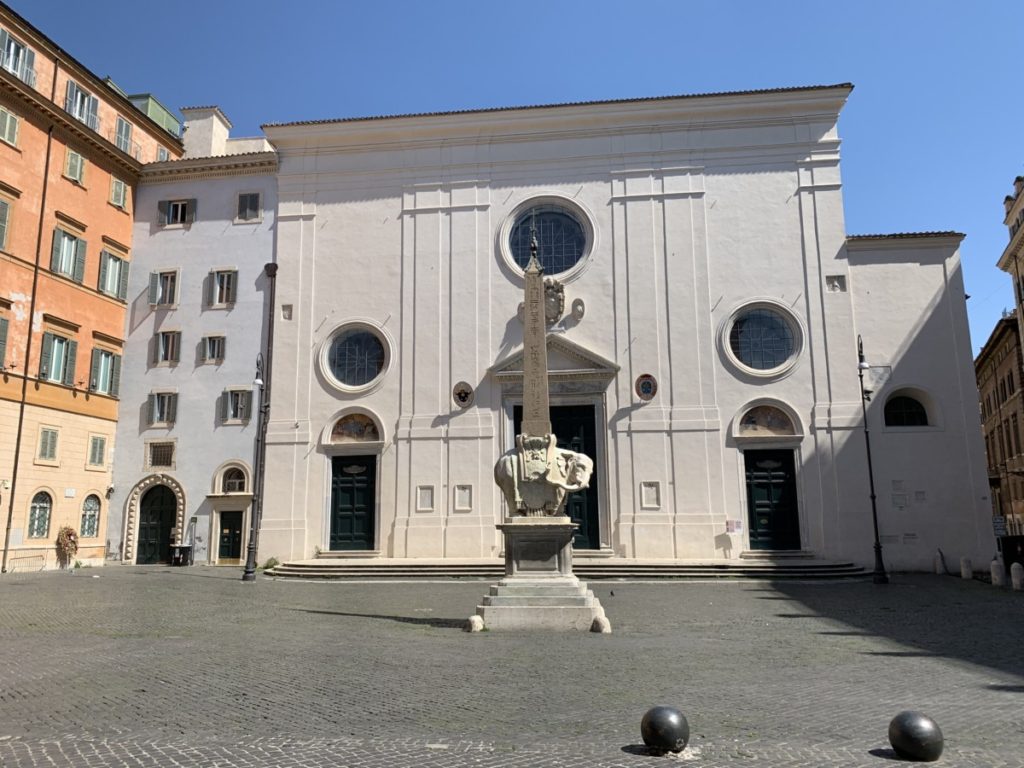 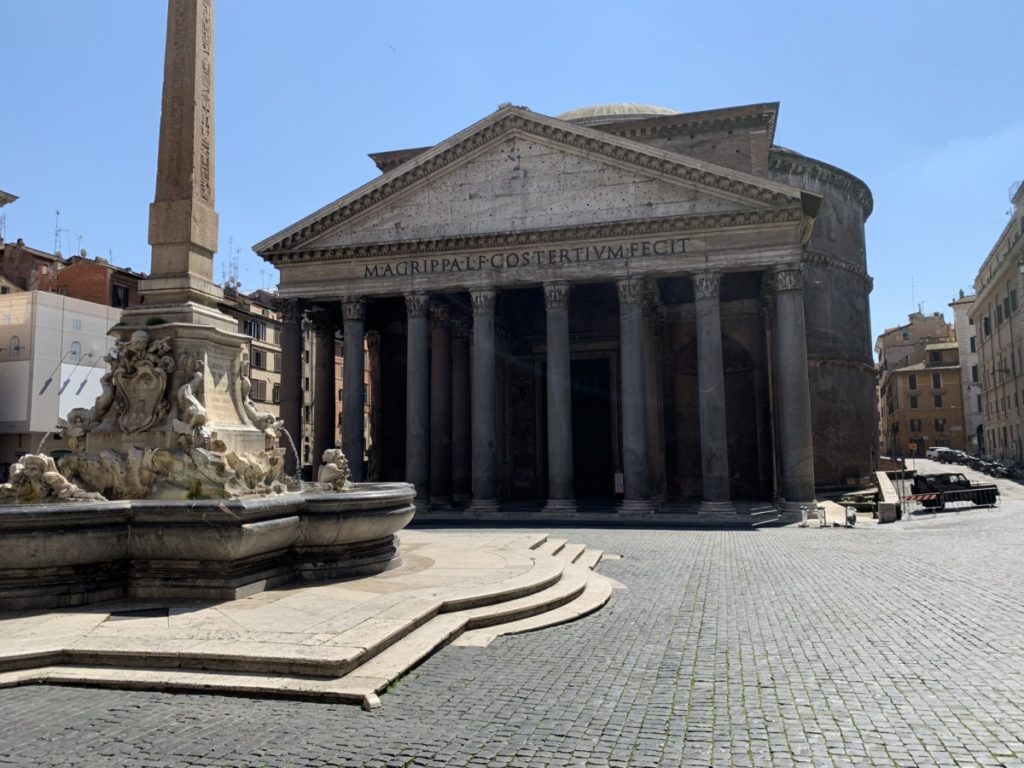 The Pantheon, where Renaissance artist Raphael Sanzio is buried. 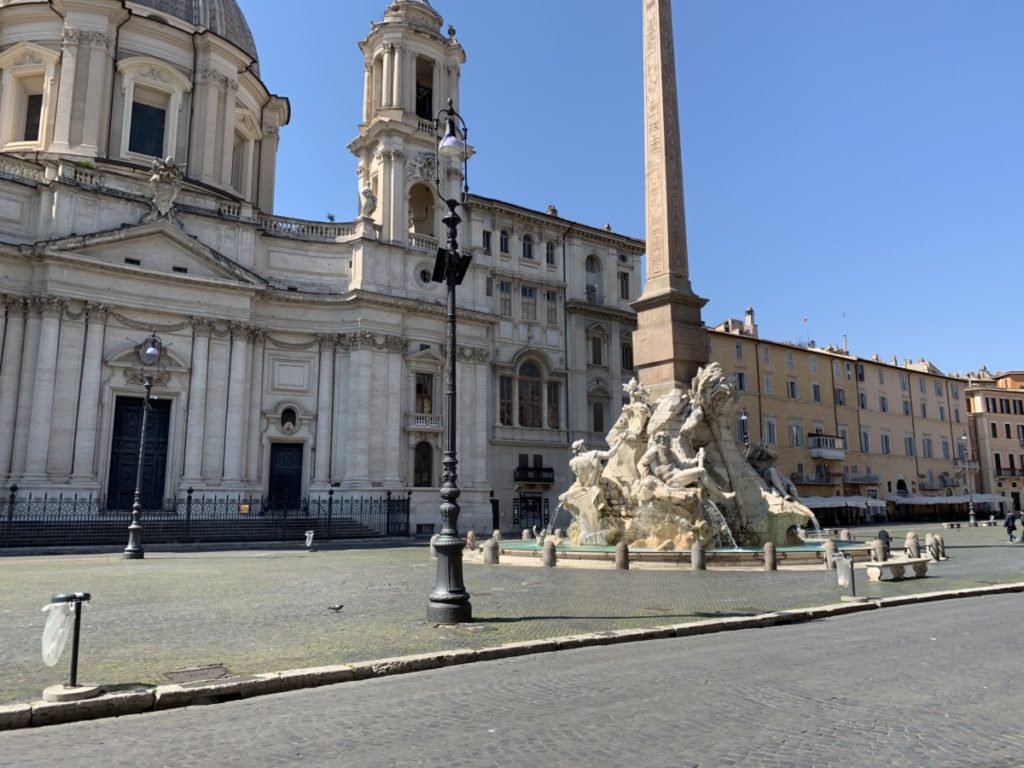 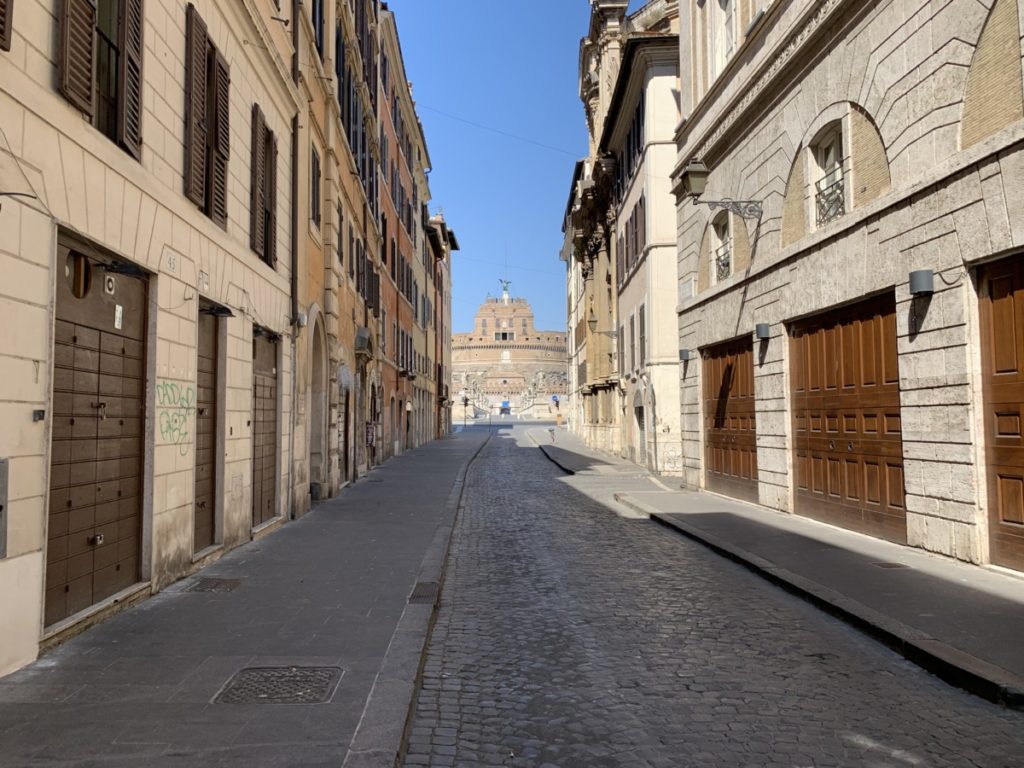 The famed Mausoleum of Hadrian, also known as Castel Sant’Angelo. 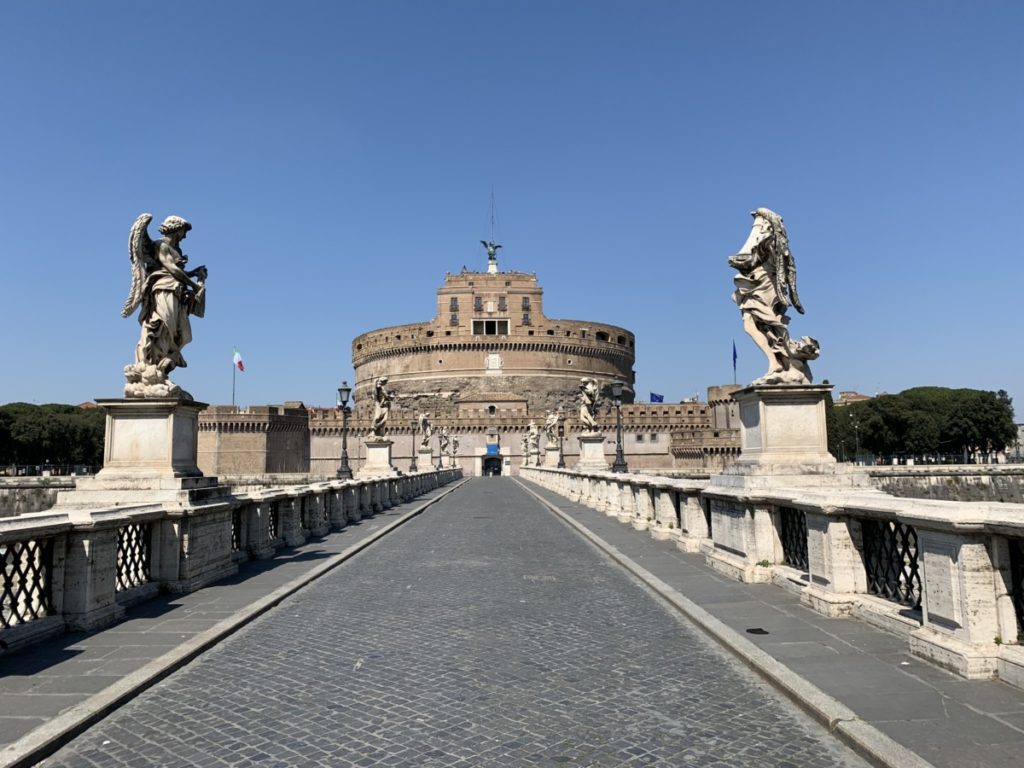 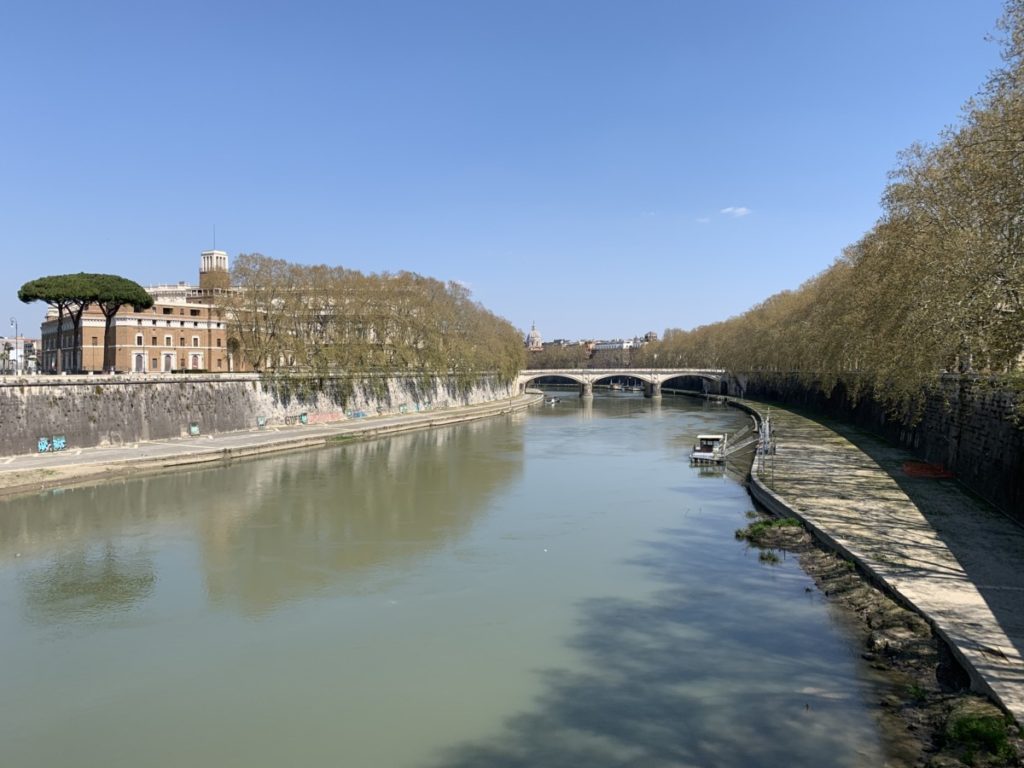 The Tiber River, with the conspicuous absence of joggers, bikers, and street vendors. 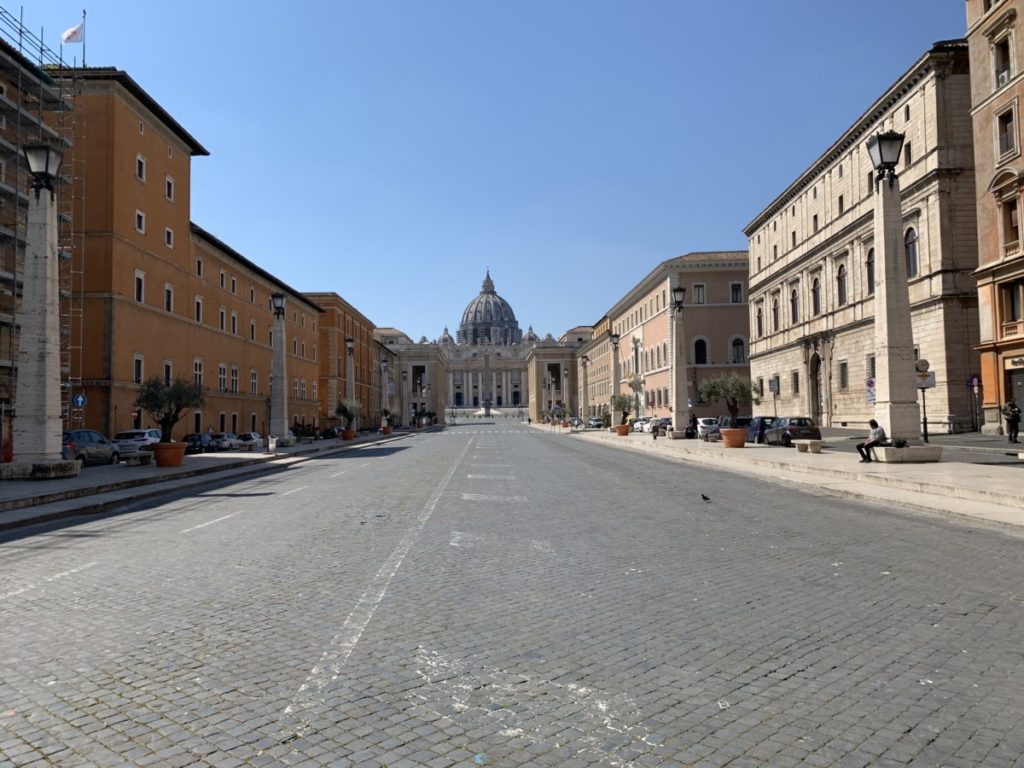 Via della Conciliazione leading up to Saint Peter’s Square, with one lone homeless man.