UCLA Health was one of nearly 60 sponsors of the Los Angeles pride parade this year. The parade was also sponsored by Starbucks, Univision, Google, Sony, Delta, Amazon, Tik Tok, AT&T, and various other well-known corporations.

UCLA Health performs sex-change operations and hormone therapy on both adults and children. The “Gender Health Pediatric Care” portion of their website explains that children are eligible to receive “gender-affirming hormone management,” which includes “puberty suppression therapy.” Lupron is one drug that is commonly used to prevent puberty and has also been used to chemically castrate sex offenders. The site also notes that children can undergo hormone replacement therapy that replaces their natural hormones “with the hormones consistent with the affirmed gender.”

But children can even undergo “gender affirmation surgery” at UCLA Health, which the hospital explains “can be an important step in a young person’s transitioning process.” The website says that such surgeries are not recommended until adulthood, though a guide from the UCLA Gender Health Program contends that surgeries to change one’s voice, Adam’s apple, facial structure, or genital function are “typically pursued later in adolescence or adulthood.” The guide recommends other steps for younger individuals, including chest binding, voice therapy, and hormone replacement therapy.

Cedars-Sinai, a network of hundreds of hospitals, also sponsored the L.A. pride parade. Cedars-Sinai also has an interest in propagating transgenderism, as they offer a litany of operations that are intended to either masculinize or feminize an individual’s body, including brow lift, forehead contouring, mandible contouring, “transition related hormone management,” and even “feminizing hand surgery.” 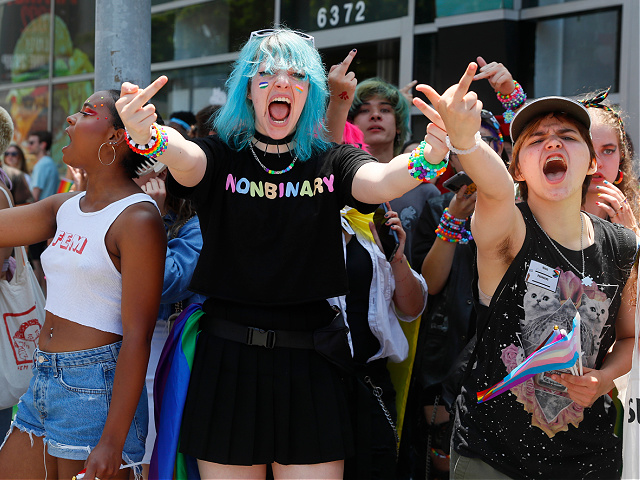 Children who attended the L.A. pride parade were exposed to a wide array of graphic scenes, as Breitbart News previously reported. UCLA Health was just one of the various hospitals across America that sponsored a pride parade while also aiding minors’ attempts to transition.

UCLA Health and Cedars-Sinai did not respond to requests for comment.