Crime data shows that roughly 2,600 migrants will be murdered and roughly 103,000 will be raped or assaulted during their 2019 migration to the United States, says an estimate prepared by Steven Kopits, president of Princeton Policy Advisors.

“We estimate 80,000 migrant women were raped or coerced into sex during 2018, rising to 103,000 on higher migrant numbers in 2019,” said a statement from Kopits, whose predictions of migration increases been repeatedly validated by the eventual numbers. “These are persons … Incidents could be up to 50% higher.”

Kopits argues that the massive level of brutality could be sharply reduced if the United States expanded the current blue-collar guest workers programs. For example, the H-2B program brings in roughly 80,000 guest workers from Jamaica, Mexico, Honduras, and many other countries for manual labor at resorts, hotels, restaurants and forestry firms.

The similar H-2A visa program delivers more visa workers to agriculture companies, both to replace illegal aliens and also avoid the purchase of labor-saving machinery. Both programs require foreign workers to return home one a year or so, so keeping many of their families in the home country.

“In a market-based approach, 95% of the [criminal] pathology noted above disappears, virtually overnight (as does the domestic exploitation),” Kopits said in a statement to Breitbart News. He continued:

One can only imagine that, say, [Democratic Rep.] Alexandria Ocasio-Cortez would want to support legislation which would protect 100,000 women per year and see up to 100,000 imprisoned migrants released … If you have AOC, by definition you have [House Speaker Nancy] Pelosi. Democrats have little choice but to support a market-based approach, to the extent it is not otherwise cruel. 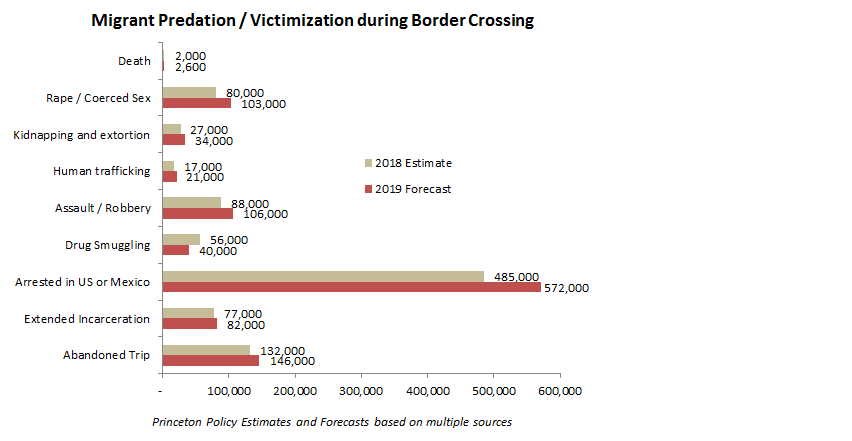 Pro-American immigration reforms groups oppose both the blue-collar programs and the white-collar programs, such as the H-1B, L-1, and OPT programs. They argue the visa worker programs lower wages and salaries and create a huge incentive for companies to exploit foreign workers and discriminate against Americans.

But it is also unclear if Democrats are willing to use the visa worker programs to prevent the murder and rape of migrants.

On March 6, for example, Democrats simply ignored the issue of crime against migrants during their questioning of Homeland Security chief Kirstjen Nielsen, even though she spoke repeatedly about the crime.

“Because of the increase in violence, at ICE, when we have families with children, we have to give every girl a pregnancy test over 10,” Nielsen said during her March 6 testimony.

Investors want cheap migrant labor, retailers want more consumers, progressives want to claim nobility by aiding distant strangers. Too bad a huge share of the female migrants do get raped during the process. But Trump & his voters are the bad guys, right? https://t.co/EOc3sM4Wsf

However, several Democratic legislators tried to undermine President Donald Trump’s pro-American border policy by loudly declaring their concern for two sick children who died in U.S. custody after they were carried across the border by their migrant parents.

The Democrats also complained about the “cages” where migrants wait to meet with lawyers before border processing and release, and they complained that some economic migrants are required to wait in Mexico instead of being immediately released into the United States.

The Democratic chairman of the House panel, Rep. Bennie Thompson, began one set of questions by asking, “Madam Secretary, are we still using cages for children?” Nielsen rejected the claim, prompting Thompson to continue:

I’ve seen the cages. I just want you to admit that the cages exist … I saw the cyclone fences that were made as cages. and you did too. All you have to do is admit it. if it’s a bad policy, then change it. but don’t mislead the committee.

Nielsen pointed out that the U.S. government does not send children to jail with their convicted parents.

Rep. Nanette Barragán, a Democrat from Los Angeles, and a leader of the Latino caucus, vented against Nielsen. “You have no feeling, no compassion, no empathy here,” she claimed.

Barragan did not suggest any measures to reduce the crime against migrants — for example, the estimated 80,000 rapes and assaults — except for even quicker and easier entry by economic migrants into the United States and into the U.S. job market.

After the hearing, Democrats competed to display their anger at Nielsen via Twitter.

As a nurse, I’m concerned about the trauma young children and families are experiencing as a result of DHS separating families at the border. Tearing kids away from their parents is unacceptable, immoral, and just plain wrong. pic.twitter.com/J3OTEGKC5I

Lying to Congress under oath is a felony.

The last person who did that is going to prison. https://t.co/bbjVS4uGGc

In contrast, Republicans repeatedly brought up the crime issue. For example, GOP Rep. Dan Crenshaw cited the case of one girl who was brought across the border to serve as a prostitute in the United States for five years: