“The uncomfortable reality is that undocumented folks are, in many ways, like Social Security, subsidizing everybody else,” Buttigieg told Rev. William Barber, a progressive activist in North Carolina. Buttigieg was at the North Carolina event to raise his abysmal poll ratings among black Americans.

Buttigieg’s dismissive comments about Americans echo the government-centric view of progressives, who tend to value Americans and illegal aliens by their payments into federal, state, and local tax programs.

But his glib claim ignores the vast economic and civic costs that illegal migration imposes on ordinary Americans — and the huge economic subsidy that is gained by wealthy investors from the inflow of cheap immigrant labor.

Buttigieg’s comment has a kernel of truth; some illegal aliens pay into the Social Security fund and do not get the money back when they are older because they are here illegally. The unclaimed money is then given to retired Americans.

I can’t stress enough how insane this is.

But Buttigieg’s dismissal of Americans’ value becomes more glaring as experts expose the growing costs of migration — both illegal and legal.

For example, many illegal aliens get legal status, so allowing them to draw from the Social Security fund. The naturalized immigrants typically get status via the federal government’s open-ended, slow-motion, and quiet Adjustment of Status amnesty. Their numbers will grow over the coming decades, so taking a chunk out of Social Security.

Also, federal payments to illegal aliens are rising, mainly because the federal government provides welfare for the poor children of illegal migrants.

Those payments include schools, health care, and some welfare programs — such as school lunches, food stamps, and housing subsidies — that would otherwise be saved or given to Americans. The Center for Immigration Studies reported:

These myriad payments are spent by the recipients — and the money flows back to U.S. companies, such as Walmart or apartment rental companies. This means the welfare programs become a taxpayer-funded subsidy to the investors who own the companies and apartments.

This welfare subsidy to investors is huge: Each legal or illegal immigrant costs state and local taxpayers roughly $1,600 more per year than the immigrant generates in taxes, says a non-partisan 2016 report by the National Academies of Sciences. In total, the current annual net cost of first-generation immigrants — including the cost of educating their children — adds up to $57.4 billion per year, much of which is paid by state and local taxpayers.

The per-immigrant cost — and the subsidy to business — is roughly equal to the tax surplus paid by one native-born American, which ranges from $1,300 to $1,700, says the report, titled “The Economic and Fiscal Consequences of Immigration.”

The taxpayers’ support for illegal migrants goes far beyond cash.

For example, illegal aliens who pay into Social Security often use numbers stole from Americans. According to the Center for Immigration Studies reported in 2017 that:

The use of unlawfully obtained Social Security numbers by individuals eligible for DACA status is so pervasive that the Obama administration instructed applicants not to disclose their illegally obtained numbers. That ensured that Americans who are the victims of DACA identity theft were left with destroyed credit, arrest records attached to their names, unpaid tax liabilities, and corrupted medical records while the DACA recipients walked away scot-free from multiple felonies — forgery, Social Security fraud, perjury on I-9 forms, and identity theft.

The illegal migrants also damage vital schooling for Americans. For example, hundreds of thousands of Central American children have been sent to or carried into the United States during the last two years via the border law loopholes created by Congress and the courts. Those children will crowd into the public schools used by blue-collar Americans, so crimping the quality of education received by Americans’ kids, including African-American, Latino, and white kids.

GOP & liberals will debate & vote for a farmworker amnesty on Wed. What replaces the illegals? An uncapped army of gov't-supplied H-2A visa-workers who will convert Americans' towns into low-tech 'company towns' for investors & the Chamber, AKA JBSville. https://t.co/M9H1Jj3cPR

Outside the government programs, illegal aliens also impose a huge cost on Americans who are trying to earn a living in the free market for labor. For example, illegal aliens flood into workplaces and reduce Americans’ wages. The blue-ribbon National Academies was very clear on page 171 of its report:

Immigrant labor accounts for 16.5 percent of the total number of hours worked in the United States, which … implies that the current stock of immigrants lowered [Americans’] wages by 5.2 percent.

That 5.2 percent “immigration tax” caused by legal and illegal immigration adds up to $500 billion per year lost by employees because of competition from lower-cost immigrants.

The $500 billion tax does not disappear — it goes to employers and to investors, according to the NAS report.

Cheap labor is good for employers who can cut payrolls, perhaps by more than a $1 per hour for blue-collar workers. That is a double-gain for investors because it increases their profits and pressures the government to supply the underpaid workers with welfare programs.

But the cheap imported labor is even better for the investors who gain roughly $20 in stock market wealth for every $1 cut in payroll. That 20:1 process sharply widens the growing wealth gaps between employees and investors.

This huge subsidy of extra labor is repeatedly justified as a boost for the economy. But most of these economic gains go to wealthy investors — not to ordinary wage earners, retirees, or children.

In 1966, wage earners got 66 percent of the nation’s new wealth according to a report by the U.S. Bureau of Labor Statistics. Wage earners’ share gradually slid to share slid to 63 percent in 1990, when President George H. W. Bush and Congress sharply increased immigration and wage earners’ share crashed to 58 percent after the 2008 crash. That decline means that wage earners lost one-eighth of their new wealth to investors, and the investors grew their share of the new wealth by eight points, or from 34 percent to 42 percent. 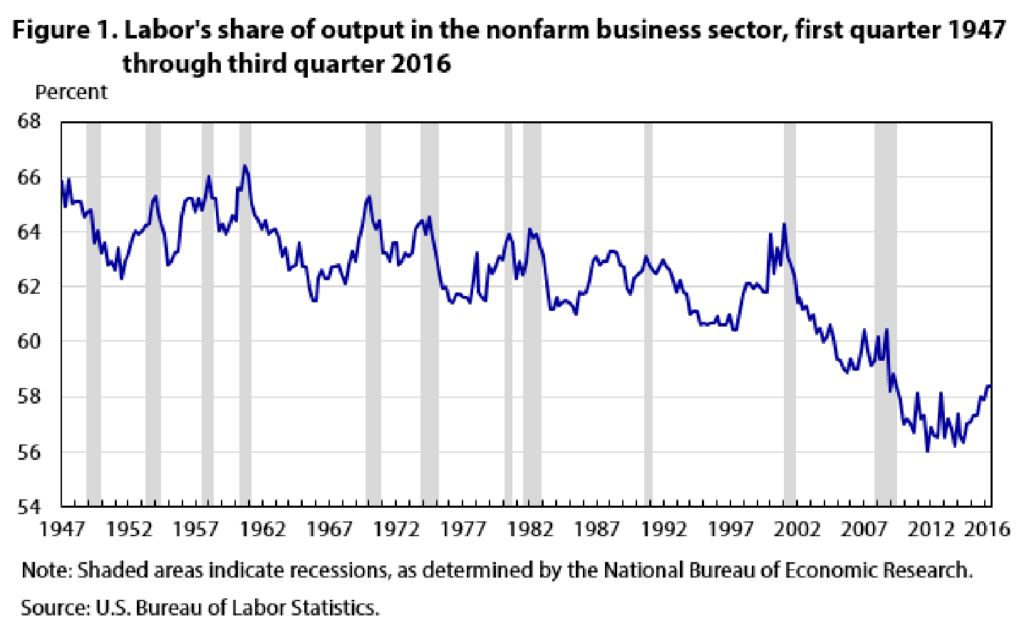 While immigration brings cheap workers to job sites in the United States, the economic trend is accelerated by technology and trade, which are moving jobs to lower-priced workers in China and India while stock markets send the profits to investors worldwide.

The immigration tax and the various welfare and aid programs also help to change the economic demography of the United States.

New migrants tend to flow into the wealthier coastal cities, so pushing up rents and raising the real estate values of the apartments and houses owned by Americans in the coastal cities. These migrants tend to grab new jobs, so they have reduced the internal migration of Americans from poor counties to wealthy cities, such as the decades-long industrial-era movement of West Virginians to Baltimore, Philadelphia, or Chicago.

Also, coastal investors have little need to invest their job-creating money into the distant towns where young Americans are looking for jobs, such as in Kansas or the Dakotas. Instead, the investors can invest their funds in sites that are just a short distance from their offices in New York or San Francisco because the federal government will fly planeloads of immigrants into the nearby JFK or LAX airports.

The result of these trends is faster growth in coastal cities and stalled economies in the nation’s heartland:

The flood of new migrants also reduces high-tech investment in both coastal and rural towns.

This shift reduces employers’ willingness to buy high-tech machinery and robots for their Americans employees, so decreasing their ability to grow their skills, wages, and families. A pending farm bill would accelerate this trend by replacing the current stock of illegal aliens with an endless supply of legal and low-wage H-2A visa workers. The deal is designed to convert illegal aliens into Democratic voters and American farmworkers into powerless labor. Rep. Zoe Lofgren (D-CA), the author of the legislation, repeatedly described the corporatist bargain during the bill’s markup votes on in mid-November:

The bill implements a wage freeze for the year 2020 [for 250,000 H-2A visa workers]. This is a very important matter for employers, [and] wages are expected to increase by another seven to eight percent next year. Under this bill, those wage increases won’t happen.

I would prefer that these wage concessions were not in the bill. But this bill is a compromise to make sure that the farmworkers today that are looking over their shoulder in fear of deportation will no longer face that nightmare. And it is a compromise that allows additional people to come in to meet the growing [worker] needs of our agriculture sector.

The inflow of immigrants even pushes Americans out of cutting-edge research careers — and so has helped China to steal hugely valuable knowledge and secrets from Americans.

The flow of immigrants also creates new political divisions and encourages politicians to focus their attention on the demands of immigrants and their many employers. This process is supercharged by identity politics, prompting many Democrats in the 2020 presidential election to promise free health care for illegal aliens, as well as a freeze on border arrests and deportations.

Some surveys even show that progressive Democrats believe it is more critical to help foreigners than to help Americans:

1/n I'd imagine that this is the underlying attitude pic.twitter.com/C48yoKtlyn

In effect, Democratic progressives and GOP-aligned business groups have divorced themselves from their fellow Americans, who are loudly demanding more respect and a larger share of the nation’s wealth. Instead, that elites’ sense of solidarity is increasingly felt towards the poor and grateful immigrants who are glad to accept the new cheap-labor rules that steer more wealth to the allied progressive and business elites.

Aided by immigrant votes, elites are looking for ways to expand the flow of migrants into the United States. For example, elites are pushing for a farmworker amnesty, rewards for Indian college graduates, more poor migrants, more investor visas, and the easy movement of labor between the United States and India via a U.S.-India Outsourcing Economy.

This divisive trend is good for elites because it divides Americans and so prevents them from imposing their preference on the elites. This political destabilization has unexpected consequences, such as the 2016 election of New York entrepreneur Donald Trump to the White House.