ROME — Pope Francis presided over the installation of a migrant crucifix in the Vatican Thursday, on which he had a migrant life vest placed on the cross in place of the body of Jesus.

The ceremony of the hanging of the new cross took place at the end of a meeting between the pope and a group of 33 migrants that the pontiff had flown over from the Greek island of Lesbos.

The life jacket on the cross was recovered adrift in the middle of the Mediterranean Sea last July and is believed to have belonged to a migrant who died at sea.

“I decided to exhibit this life jacket, ‘crucified’ on this cross, to remind us that we must keep our eyes open, keep our hearts open, to remind everyone of the absolute commitment to save every human life, a moral duty that unites believers and non-believers,” he said.

The crucified life jacket “wishes to express the spiritual experience that I was able to grasp from the words of the rescuers,” the pope said. “In the Christian tradition the cross is a symbol of suffering and sacrifice and, at the same time, of redemption and salvation.” 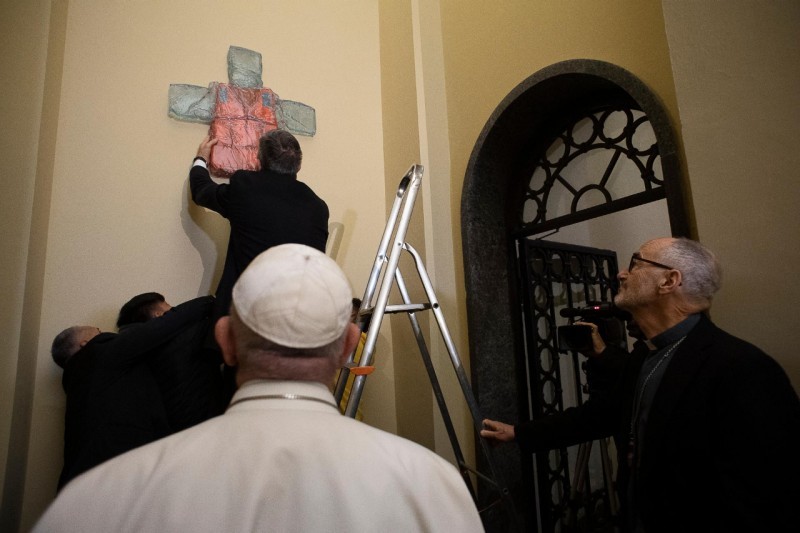 “How can we not listen to the desperate cry of so many brothers and sisters who prefer to face a stormy sea rather than die slowly in Libyan detention camps, places of torture and despicable slavery?” Francis said.

“How can we remain indifferent to the abuses and violence of which they are innocent victims, leaving them at the mercy of unscrupulous traffickers? How can we ‘walk on by,’ like the priest and the Levite in the parable of the Good Samaritan, making ourselves responsible for their death? Our inaction is a sin!” he exclaimed.

The pope also took advantage of the occasion to criticize the policies of former interior minister Matteo Salvini, who made reining in mass migration his number-one priority.

“I thank the Lord for all those who have decided not to remain indifferent and do their utmost to help the victim, without asking too many questions about how or why the poor half-dead person wound up on their street,” Francis said. “It is not blocking their boats that the problem is solved.”

In point of fact, however, migrant sea deaths declined significantly as a result of Mr. Salvini’s closing of Italian ports, which blocked the illegal trafficking of migrants across the sea. After the re-opening of ports by the new leftist government, migrant sea deaths have again begun rising.

In his address Thursday, Pope Francis said that attention should be directed to Libya, with migrants there presumably being brought to Europe.

“Serious efforts must be made to empty the detention camps in Libya, evaluating and implementing all possible solutions,” he said. “It is necessary to denounce and prosecute traffickers who exploit and mistreat migrants, without fear of revealing connivance and complicity with the institutions.”

The Catholic Church has an “inescapable commitment to saving the lives of migrants,” he said.

At the end of the ceremony, the pope invited those present to say a silent prayer while contemplating the crucified life vest.