The U.S. Coast Guard was searching Wednesday for 39 people reported missing presumed lost off the coast of Florida in a “suspected human smuggling venture” gone wrong.

A migrant boat containing at least 40 passengers capsized off the coast of Florida while making a suspected illegal journey from Bahamas’ Bimini islands – located about 50 miles east of Miami.

The U.S. Coast Guard has reported the boat foundered “45 miles east of Fort Pierce Inlet”, which is a State Park located on the coast between Miami and Orlando.

A “good Samaritan” is said to have notified authorities after finding a “man clinging to a capsized vessel” at around 8 am on the 25th of January 2022. 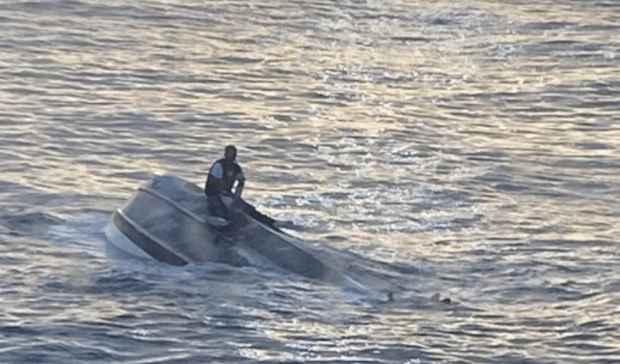 Rescue teams are searching the waters some 45 miles off the Florida coast after a boat capsized on Tuesday, January 25, 2022. One man was found at the scene. (U.S. COAST GUARD)

This prompted “air and surface” rescue crews to look for the migrants – which continued overnight covering an extensive area “from Bimini, Bahamas” to the “Fort Pierce Inlet”, which is an approximately 130 mile stretch of sea.

The coast guard seem optimistic about locating the survivors, however, they did report that according to the survivor “no one was wearing a life jacket”.

It has been reported the survivor found aboard the wreck has been taken to a hospital to be treated for dehydration and sun exposure.

Illegal immigration has been a growing concern for Florida, due to its proximity to the Bahamas, an island that human smugglers notoriously use to smuggle people from Caribbean islands – such as Haiti and the Dominican Republic – into the United States.

Political upheaval on Carribean islands – particularly Cuba where the communist authorities have begun indiscriminately arresting and imprisoning pro-democracy protestors – has also caused a spike in migrants attempting to illegally enter the United States.

“This is a crisis that has been created by the Biden administration”, DeSantis said.

DeSantis also highlighted Biden’s lax border policies embolden and largely benefit human trafficking criminal Cartels saying, “[the] Cartels are eating our lunch with what is going on with these border policies…They’ve never had it so good.”