Jair Bolsonaro will assume the presidency of Brazil next month with a mandate to establish trustworthy institutions in his country after nearly two decades of socialism.

Rather than being intimidated by the scope of this domestic objective, Bolsonaro and his Social Liberal Party (PSL) appear keen on not just rehabilitating Brazil, but establishing an international coalition of anti-socialists to prevent the spread of Marxist ideology, particularly in Latin America, where leftists spent most of the 21st century in power partially thanks to their robust support networks.

In his most direct foreign policy message yet, Bolsonaro stated this week that his administration would do “everything we can within legality, within democracy, against these countries,” referring to Cuba and Venezuela. He argued that Brazil’s security will remain in jeopardy so long as leftist regimes exist in the hemisphere, and has sought cooperation with right-wing leaders to eradicate the threat for all affected states.

Bolsonaro’s call for a united conservative front in the Americas is a mirror image goal to what the left has done for decades. Led by late dictators Fidel Castro and Hugo Chávez, leaders like Bolivia’s Evo Morales, Argentina’s Cristina Fernández de Kirchner, Chile’s Michelle Bachelet, Brazil’s Luiz Inácio Lula da Silva, and Nicaragua’s Daniel Ortega mastered the art of using multilateral venues to promote their agenda. For over a decade, they dominated institutions like the Organization of American States (OAS) and the Community of Latin American and Caribbean States (CELAC), turning them into anti-American soapboxes. They cultivated ties with enemies of Washington like Russia, China, and Iran, all desperate for influence in the Western Hemisphere. 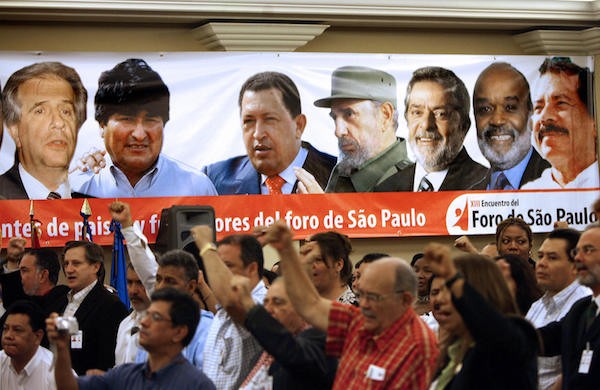 People shout slogans during the opening of the XIII Meeting of the Sao Paulo Forum, in a room decorated with a banner with portraits of Latin American leftist presidents in San Salvador, on January 12th, 2007. YURI CORTEZ/AFP/Getty Images

Often, they created their own institutions to ensure constant contact and coordination, ensuring their regimes increasingly mimicked each other and prevented anti-socialist opposition movements throughout Latin America from reinforcing each other. Hugo Chávez and Fidel Castro created the Bolivarian Alliance for the Peoples of our America (ALBA), an alternative to the OAS, in 2004. Over a decade prior, Castro and Lula da Silva created the Sao Paulo Forum.

Few in Bolsonaro’s coalition will fail to mention the Sao Paulo Forum in conversation. Founded by Lula da Silva and Fidel Castro, the Forum, as described by Brazilian philosopher Olavo de Carvalho, “is the largest political organization to have ever existed in Latin America and, without a doubt, one of the largest in the world. All the leftist rulers on the continent are members.” Conservatives in the country call it “Brazil’s worst enemy,” as it emboldens international socialist and communist leaders and allows them to organize and support each other across state borders.

The Sao Paulo Forum has already declared war on the allegedly “xenophobic, racist, misogynist, and homophobic” Bolsonaro, issuing a statement of repudiation following his election in October.

Bolsonaro’s allies, meanwhile, have begun building their own alternatives. This month, members of the PSL organized the Conservative Summit of the Americas, an event inviting regional anti-socialists to partake in forums discussing how to improve the quality of life in their respective states and fight the specter of communism in the region – in government, academia, and media. At the event, Jair Bolsonaro described the fight against communism as an “obligation” that Brazil, as South America’s largest nation, must fulfill. Brazil will “join other nations” to fight for “democracy, freedom,” he said, adding, “we will not leave the Cuban people.”

Prince Luiz Philippe de Orléans e Bragança – a member of Brazil’s royal family who won a congressional seat representing Sao Paulo as a member of the PSL, the first of his family to assume office since 1889 – told Breitbart News in an interview shortly after attending the Conservative Summit that these venues need to be a priority precisely because of the tremendous impact the Sao Paulo Forum has had in promoting socialism.

Even in a federal presidential system far from the regimes of Cuba and Venezuela, he argued, “wherever a Sao Paulo Forum member takes hold of public tax revenues, they will use it for the benefit of the [leftists in the] whole region, so it is a global network … an evil empire that they have created of financing schemes.”

Orléans e Bragança suggested that conservatives must learn from their unity, if not their lax interpretation of campaign finance laws. “If we do not have a similar type of network of communication, of addressing political change and preserving identity as far as global identity and citizenship, and nation-states, the Foro de Sao Paulo guys will win.”

The newly elected congressman expressed optimism for his country and, due to the size of Brazil, the region as a whole.

“We have a tremendous advantage now because the largest country in the region has turned to the right,” he noted. Expressing shock that some young Americans are comfortable referring to themselves as socialist, he noted, “in Brazil, it’s the reverse, you see the younger generation claiming to be conservative with honor and pride, which is totally unheard of. I have never in my life heard a Brazilian say they are conservative.”

This rightward shift – which Orléans e Bragança is quick to note is not a sharp rightward turn to military rule, as some in American mainstream media have claimed, but a pivot towards “a democratic regime of limited government, of decentralization of power” – has also inspired hope in anti-socialist advocates and security experts who have long warned that the Cuba-Venezuela axis presents a dire security threat for the hemisphere.

Among those Bolsonaro has brought closest into his circle are pro-democracy Cuban activists. On Thursday, Bolsonaro welcomed to his home Dr. Orlando Gutiérrez-Boronat, the head of the Assembly of Cuban Resistance, a Cuban-American advocacy group. Gutiérrez-Boronat, who also participated in the Conservative Summit of the Americas, told Breitbart News in an interview from Rio de Janeiro that he left the meeting feeling confident in what Bolsonaro is trying to build.

“This is a solid anti-Communist movement grounded in Brazilian history, with a formidable intellectual framework and a clear notion of Brazilian national security priorities,” Gutiérrez-Boronat said. “Ignoring the Communist regime in Cuba has been a calamity for Latin America, which Bolsonaro is addressing in his foreign policy vision.”

Joseph Humire, the executive director of the Center for a Secure Free Society and an expert on Iranian infiltration of Marxist regimes in Latin America, told Breitbart News that he, too, expects Bolsonaro’s leadership to make it more difficult for Venezuela and Cuba to enable groups like Hezbollah.

“Almost all Islamist terror plots or attacks in South America have an origin or connection in Brazil. While the Federal Police, and other agencies, have done great work over the years in cooperating with the United States, there has also historically been a lack of political will in Brazil to tackle Islamist terrorism head-on,” Humire explained. “I am very optimistic that a Bolsonaro presidency in Brazil will not only deal with this issue but can provide regional leadership on anti-terrorism at a critical juncture when Iran, Hezbollah, and other terrorist elements are on the move in Latin America.” 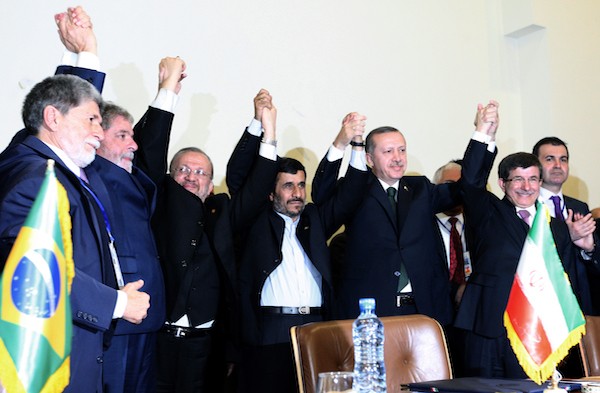 The use of Brazilian territory to support groups like Hezbollah and regional Marxist organizations like the Revolutionary Armed Forces of Colombia (FARC), he adds, “I believe … will change under the leadership of President Bolsonaro, who has made it a point during his campaign to challenge the socialist/populist regimes in Latin America, namely Cuba, Bolivia, and Venezuela, who have destabilized so much of the region.”

Ample evidence, including documents revealed as part of the Panama Papers leak, indicate that Cuba has helped Venezuela provide a variety of Shiite terrorists with authentic Venezuelan legal documentation, including passports, to help them escape international police detection. Evidence compiled throughout years of research indicate that Tarek El Aissami, Venezuela’s Minister of Industries and National Production and former vice president, is one of Hezbollah’s most powerful fundraisers in Latin America. Like Humire, the U.S. State Department has warned that Bolivia has also aided Hezbollah’s establishment in the region.

Bolsonaro’s rise precedes a turbulent election in Bolivia, where leftist President Evo Morales is illegally seeking a third term. Bolivia’s Supreme Electoral Tribunal, under Morales’ control, ruled to allow him to appear on the 2019 ballot despite a ban on third terms, which passed via national referendum in 2016. Morales has relied heavily on support from Venezuela and Cuba to stay in power.

Bolivian opposition Senator Juan René Guachalla, from Cobija-Pando, a border state with Brazil, told Breitbart News via email from Bolivia that he hopes Bolsonaro’s win will make clear to the region’s Marxists that “the global left is a no-go” for the world’s peoples.

“I don’t see it being too hard for countries that are against socialist governments, in the not-too-distant future, to sit down and reach agreements so that once and for all we can eradicate this scourge that has hurt our people so much,” he noted. “Corruption in my country has gone to such an extreme that, should someone denounce it, they will go to jail.”

From the Brazilian border, he adds, “the expectations of the Brazilian people are very great;” on the Bolivian side, the timing is right, as Morales “is using methods similar to Venezuela’s” to stay in power.

Adding the expectations of the long-maligned Latin American right to the weight of fulfilling campaign promises to the Brazilian people has made Bolsonaro’s one of the most anticipated presidential tenures in the region’s history. As a politician, whether he achieves his goals will most likely depend on whether his people will hold him accountable – but what he has made clear is that his administration has a lot more than the future of Brazil riding on his shoulders.