An official in the administration of French President Emmanuel Macron suggested on Monday that the world should seek to expand available oil supplies from Iran and Venezuela in response to the growing energy crisis exacerbated by Russia’s invasion of Ukraine.

Both Iran and Venezuela are close allies of Russia. Venezuela, home to the world’s largest oil reserves, is billions of dollars indebted to Russia and allows the Russian military to operate on its soil, meaning that any Venezuelan oil profits would largely go to Russia and undo the effect of sanctions on Moscow.

The unnamed French official made the remarks favorable to both repressive regimes during the G7 summit currently ongoing in Germany, according to Reuters.

“There are resources elsewhere that need to be explored,” the official was quoted as saying, adding that “there is a knot that needs to be untied if applicable … to get Iranian oil back on the market.”

The latter remark appeared to be a reference to American sanctions on the Iranian oil industry, implemented in response to Iran’s status as the world’s most prolific state sponsor of terrorism. 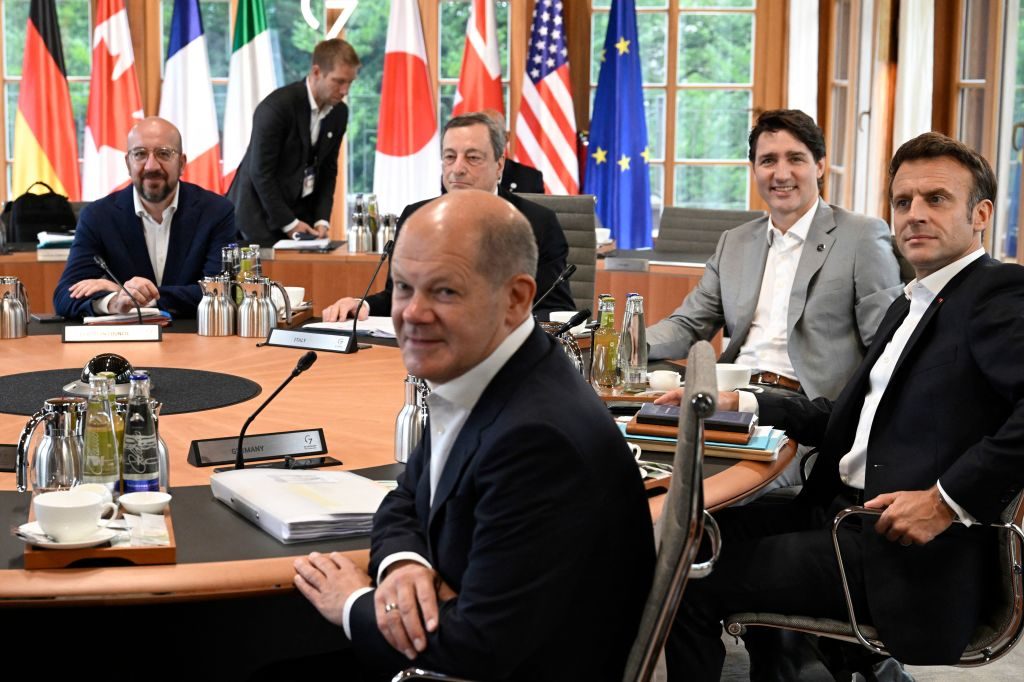 The Iranian Islamist regime supports Yemen’s Houthi movement, Hezbollah operatives in Lebanon and Syria, and the Popular Mobilization Forces of Iraq. In addition to terrorists in its region, Iranian terror operatives are believed to be responsible for the deadliest terrorist attack in the Western Hemisphere prior to September 11, 2001 – the killing of 85 people and wounding of hundreds of others in the 1994 bombing of Buenos Aires’ Argentine-Israeli Mutual Association (AMIA) center.

The French official indicated that Paris also seeks to undo sanctions on the Maduro regime in response to its committing of human rights atrocities against Venezuelan protesters, including the widespread killing of children, during the protest movement that spanned from 2014 to 2018.

“We have Venezuelan oil that also needs to come back to the market,” the official said.

Reuters quoted a second anonymous alleged French official who insisted that the world needed “to diversify supplies and have an outreach to producing countries” to create “a better position facing Russia.” That official did not mention Iran or Venezuela by name, and thus did not address how enriching Russian allies creates “a better position facing Russia.”

Maduro responded to reports of French interest in his dying oil industry – whose production and refinement ability has been decimated by socialist mismanagement, not sanctions – with enthusiasm during a live broadcast on Monday evening.

“President Macron, Venezuela is ready to receive all the French companies who want to come and produce petroleum and gas for the European market, for the world market,” Maduro said. “Welcome whenever you’d like, we are ready, willing, and able to do it.”

France does not recognize Nicolás Maduro as the head of state of Venezuela. The French government recognized President Juan Guaidó as the legitimate leader of the country in 2019 when the National Assembly swore him into office. The Venezuelan constitution allows the National Assembly, the federal legislature, to appoint an interim president in the event of a “rupture in the democratic order,” which occurred when Maduro held a rigged “election” in 2018.

Investing in the Maduro regime will likely result in financial benefits for Russia. While the Maduro regime’s finances are not entirely transparent, reports indicate that the regime’s overall foreign debt totaled about $100 billion in 2019, most of it believed to be to Russia and China. The Maduro regime’s destruction of the Venezuelan economy, once the wealthiest in Latin America, has resulted in extreme hardships for the country to stay afloat in those debts.

"If you care about the environment, you should want to have every barrel of oil produced in the United States versus elsewhere." https://t.co/fjB1l4nQsk

In 2017, the Russian government agreed to restructure $3 billion in debt to Moscow after reportedly seizing oil fields and other key assets from PDVSA through the Russian Rosneft oil corporation.

Russian officials confirmed the restructuring deal would result in a consistent flow of payments out of Caracas to Moscow, allegedly in an “affordable” way for Maduro.

Russia first invaded Ukraine in 2014, colonizing the Crimean peninsula and backing pro-Russia separatists in the Donbass region, which borders Russia. France has attempted to take a lead role in mediating relations between Russia and Ukraine since them, constituting one of two chaperones of Russia-Ukraine talks, the other being Germany, in the “Normandy” structure of negotiations. While prior presidents appeared satisfied with the Normandy format, current Ukrainian President Volodymyr Zelensky repeatedly condemned it as useless.

Last year, Zelensky demanded that Germany and France be replaced by “serious” countries in a separate dialogue format, but failed to find replacement parties before Russian strongman Vladimir Putin launched a full-scale invasion of the country in February.