Cuban Deputy Prime Minister Alejandro Gil confirmed this weekend that the Communist Party’s puppet “president” Miguel Díaz-Canel secured a $100-million “donation” from the Chinese government during his visit to Beijing.

Díaz-Canel returned to Cuba on Sunday after a four-nation tour that brought him to Algeria, Turkey, Russia, and finally China, where he met with Chinese dictator Xi Jinping. Government propaganda from both nations emphasized that the purpose of the trip was to strengthen ideological ties and reinforce the spread of communism, omitting details of what, exactly, the two leaders discussed. The Cuban regime’s desperate economic situation – a product of nearly 64 years of incompetent and corrupt communist rule – indicated, however, that the regime likely felt it necessary to reach out to its closest partners for economic help.

Cuba has been an impoverished oligarchy run by the Castro family for decades, but daily life for Cubans has deteriorated significantly in the past five years as Raúl Castro, taking over for dead brother Fidel, has failed to maintain critical infrastructure sites such as grain mills, oil depots, and power plants. Following the passage of Hurricane Ian this summer, the island experienced a total blackout; areas outside of the isolated luxury enclaves reserved for the Castro family and international tourists continued to endure daily blackouts through November. 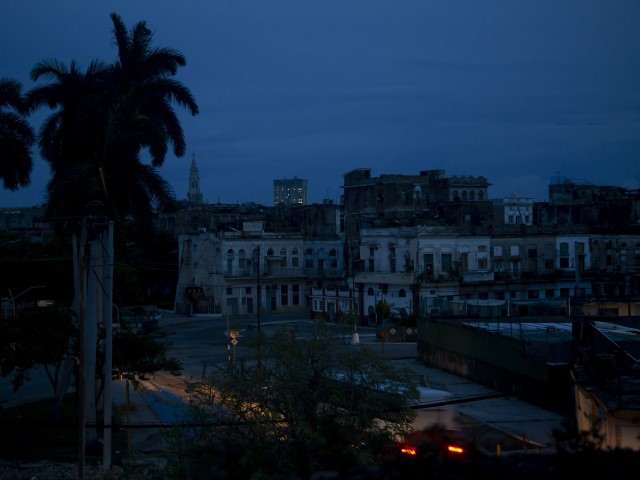 A neighborhood sits dark during a blackout triggered by the passing of Hurricane Ian in Havana, Cuba, early morning Wednesday, Sept. 28, 2022. (Ismael Francisco/AP)

Both Chinese and Cuban government officials spent much of Díaz-Canel’s visit blaming the United States for the island’s economic woes, as America has not had trade ties with Cuba since the 1959 communist revolution. Cuba claims that America’s “embargo,” a set of loosely administered limitations on Americans doing business with the Castro regime, is the sole cause of poverty and hardship in the country, a claim China supports. In reality, America does not ban humanitarian aid to Cuba and the island enjoys trade relationships with most of the world’s other largest economies, but the majority of those profits remain in the hands of the ruling family, outside the reach of regular citizens. Cuba also imposes stricter restrictions on imports from America than those of the “embargo,” but denies that these have any meaningful impact on its economy.

Following a meeting between Xi and Díaz-Canel full of anti-American vitriol, the Chinese Communist Party – whose top trade partner is America – agreed to give the Castro regime a $100 million “donation,” Gil, the deputy prime minister, revealed during a press conference on Saturday.

“Our president explained the situation we are facing, there was understanding on the Chinese part and we will be aligning our positions at the service of finding mutually acceptable formulas for the organizing and restructuring of debts,” the deputy prime minister said, according to the independent outlet Cubanet. Gil claimed that the $100 million was an extra donation independent of what Díaz-Canel and Xi had agreed upon initially. Neither government has offered specifics on what, exactly, the $100 million is meant to fund.

“The negotiations centered around biotechnology … energy, and the most recent Cuban regime obsession: cybersecurity and information monitoring, which will give it more technological resources to control the population and prevent new protests like the ones on July 11, 2021,” 14 y Medio noted. 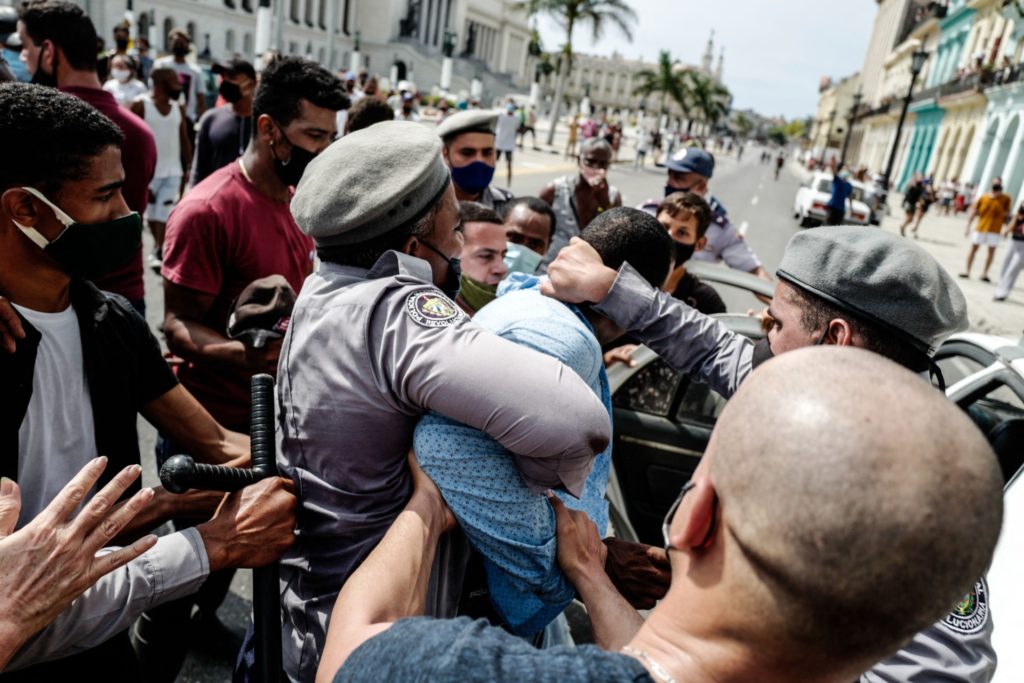 A man is arrested during a demonstration against the government of Cuban President Miguel Diaz-Canel in Havana, on July 11, 2021. (ADALBERTO ROQUE/AFP via Getty Images)

An estimated 187,000 people, at least, convened in nearly every municipality on the island on that day, demanding an end to the communist regime. While most of the protests were overwhelmingly peaceful, the Castro regime responded with brute force, shooting people in their homes, beating them on the streets, and arresting and imprisoning children for decades after being caught participating in the event. The repression has largely failed, as protests have continued unabated throughout 2022.

A teddy bear rests on the bed of Mackyanis Yosney Romam Rodriguez, who is in prison along with her two brothers, accused of participating in the recent protests against the government, at their home in La Guinera neighborhood of Havana, Cuba, Wednesday, Jan. 19, 2022. (Ramon Espinosa / AP)

The Castro regime notoriously shut down the internet in July 2021 to prevent protesters from organizing and to block them off from the rest of the world, presumably preventing them from sharing images of police brutality with the international community. Multiple investigations following the protests revealed that Chinese telecommunications giants Huawei and ZTE aided the Cuban government in blocking off the internet.

14 y Medio, founded by citizen journalists on the island, described the telecommunications agreements between Havana and Beijing as “the most unsettling,” as they may allow Cuba access to advanced surveillance technology and contain civil dissent. The outlet noted that China had agreed to help create a digital “National Identification System,” presumably to follow and control the lives of every citizen. China has reportedly exported similar systems to Ecuador, Venezuela, and Serbia, among other countries.

Other agreements signed by Xi and Díaz-Canel included expansions of the Belt and Road Initiative (BRI), China’s plan to conquer the world’s transportation infrastructure by offering predatory loans to poor countries. While initially intended, according to Beijing, to reconstruct the Ancient Silk Road between China and Western Europe, the Communist Party has attracted interest in nations with no historical connections to that trade route, Cuba paramount on that list.

Díaz-Canel told regime reporters following his arrival in Havana on Sunday that he was “satisfied and happy” with his visit to China. He admitted that part of his world tour, particularly the stops in top creditors China and Russia, was intended to explain to those countries that his regime did not have any intention of keeping up with debt payments in the short term, but insisted that Cuba would pay in the future.

“Cuba has the will, the disposition, and the duty to honor the debts it has with other countries and, from there, we once again give continuity to a group of projects, and they are expanded, renovated, and more that are needed to develop in the country are born,” he said, according to the official newspaper of the Cuban Communist Party, Granma.

Díaz-Canel claimed that “creative resistance,” presumably to American influence, had resulted in large economies such as China and Russia defending the Castro regime.

The Chinese regime, through its state media arms, appeared satisfied with the results of Díaz-Canel’s visit.

“The Cuban leader’s China visit was short in duration but strong in substance and full of results,” the state-run Global Times newspaper acclaimed. “Taking this visit as an opportunity, the Chinese side has extended a helping hand and offered substantial support and assistance, which shows the essence of ‘a friend in need is a friend indeed.'”