MURRIETA — An American flag has reportedly been burned by pro-amnesty protesters near the Murrieta Border Patrol station on America’s Independence Day.

Breitbart News obtained the above photograph, which shows a burnt flag on the ground, from an anti-illegal immigration activist who was monitoring the pro-amnesty demonstration.

Opponents of illegal immigration had gathered in Murrieta to stop Friday’s planned transfer of Central American illegal aliens, as they did earlier this week. A pro-amnesty counter-demonstration was organized in response.

The illegal aliens, many of them unaccompanied children, are being brought from overcrowded Texas detention facilities for processing in California.

In addition, Breitbart News obtained photographs of torn-up flags that pro-amnesty demonstrators had impaled on a fence. 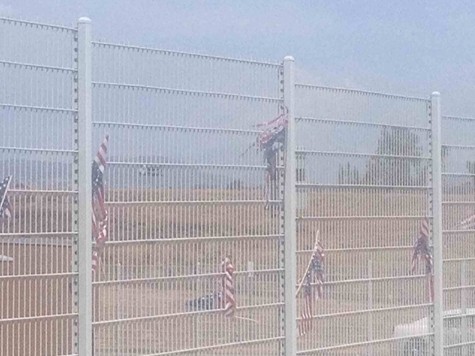 Bonnie Lewis, an anti-illegal immigration activist, told Breitbart News that she saw one of the pro-amnesty activists dragging an American flag on the ground.

Another anti-illegal immigration activist said that pro-amnesty demonstrators called her a “f***ing whore” i Spanish, and shouted, “F*** America!”