A Palestinian member of the Islamic State group who is prominent on social media claims to have unmasked an attempt by Palestinian intelligence to infiltrate groups of IS supporters in the West Bank.

Rami Jalala is perhaps the most prominent Palestinian member of IS on social media today. Jalala posted on his Facebook account, which is frequently blocked, that an individual who went by the last name of Mohammad who Jalala claims is a Palestinian intelligence official from the town of Bidia near Nablus recently tried to infiltrate the ranks of the organization to uncover IS members and supporters in the West Bank.

Jalala’s post warns of Mohammad’s intentions. According to Jalala, in conversations with “my brother” – a nickname for any supporter or member of IS – in the village of Bidia, “It turned out that Ibrahim Mohammad was a Palestinian intelligence agent since his days as a student at the An-Najah University in Nablus.” 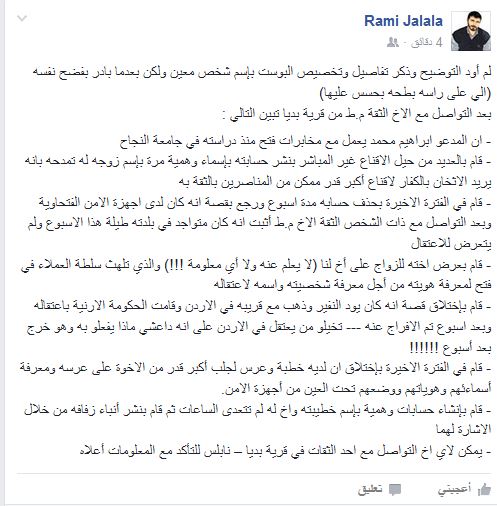 According to Jalala, Mohammad would open fake Facebook accounts which he and “his family” used to speak about Mohammad’s wish to kill infidels. On these accounts, Mohammad said a number of times that he was arrested by the Palestinian Authority for a few days and once said that he had been arrested in Jordan together with another family member for a week after the authorities claimed he was a member of IS.

In his post, Jalala wrote that he discovered through a reliable source that “[Mohammad] wasn’t under arrest that week as he claimed and during those days he was in his town and wasn’t arrested anywhere.”

With regard to the alleged arrest by Jordanian authorities, Jalala wrote, “Imagine what they would have done to someone arrested in Jordan for affiliation with ISIS, and then being released after a week.”

Jalala also wrote that in an attempt to get closer to those considered jihadists and potential supporters of IS, Mohammad tried to marry his sister to one of “the brothers” and, taking another opportunity, tried to invite “a few brothers to a wedding so that as many as possible would come with the intent of confirming their identities so that they would be placed under surveillance by security forces at the same moment.”

According to Jalala, when Mohammad became aware he’d been unmasked, he closed his various Facebook accounts.

A senior jihadist in the Gaza Strip told Breitbart Jerusalem that the case revealed by Jalala did in fact involve IS members and supporters in the West Bank and especially in the Nablus area.

The jihadist, Abu Baker Almaqdesi, claimed that the Palestinian Authority has invested significant effort in infiltrating circles of IS supporters in the West Bank: “We are in a stage in which we choose the brothers carefully and I don’t believe that the services of the traitorous (Palestinian) Authority were successful in infiltrating our ranks. Our goal is to take not only the West Bank from the traitorous (Palestinian) Authority, but to take and cleanse the holy land of Palestine from all the traitors and infidels and the Jews.”