Asia Bibi, a Pakistani Christian woman who spent eight years on death row for blasphemy against Islam before she was freed last year, is now safely in Canada and reunited with her family, her lawyer has said.

“It is a big day,” Saiful Malook told the Guardian. “Asia Bibi has left Pakistan and reached Canada. She has reunited with her family. Justice has been dispensed.”

Roman Catholic Bibi was acquitted of her religious crime last year but has since faced death threats in Pakistan and was offered asylum by multiple countries including Italy, the Netherlands, and Canada. The latter has finally provided her with safe haven.

The British government turned her away, allegedly to appease “certain sections of the community” at home and Islamist terrorists who might be inclined to attack British embassies abroad.

Blasphemy against Islam is a proscribed crime in multiple Pakistani statutes. Insulting Mohammed specifically is a crime carrying the death penalty in Pakistan. Bibi was originally sentenced to hang in 2010.

Islam is Pakistan’s national religion and underpins its legal system. Public support for the strict blasphemy laws is strong. 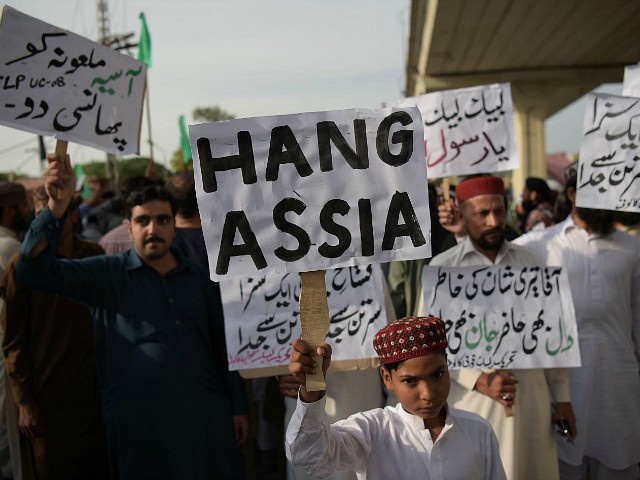 Supporters of Tehreek-e-Labaik Pakistan (TLP), a hardline religious political party hold placards as they march during a protest in Rawalpindi on October 12, 2018, demanding for hanging to a blasphemy convict Christian woman Asia Bibi, who is on death row. (AAMIR QURESHI/AFP/Getty Images)

In January, the United States Department of State placed the country on its Special Watch List for severe religious freedom violations, citing, among other infractions, Bibi’s imprisonment.

The Pentagon also cut military aid to the country that month arguing that the Pakistani government did not sufficiently curb its Islamist elements, while President Donald Trump announced cutting American taxpayers’ dollars going to aid the country for the same reason.

Malook said Bibi’s safe arrival in Canada was the result of hard work by activists, foreign diplomats and others “who stood by Bibi in hard times and worked for her freedom”.

Bibi’s case has outraged Christians worldwide and been a source of division within Pakistan, where two politicians who sought to help her were assassinated, including Punjab province governor Salman Taseer, who was shot by his own bodyguard.