TEL AVIV – Israeli researchers, together with peers from the UK and Germany, have developed a new way to detect Parkinson’s disease that has the potential to significantly delay the progression of the neurodegenerative illness.

Researchers have isolated biomarkers in mice — specifically the aggregation of the alpha-synuclein protein — a hallmark of the disease that causes the collapse of motor and non-motor functions including speech, movement, sleep and cognition.

Parkinson’s, which has no known cure, currently affects 10 million people around the world.

By the time a patient is diagnosed with Parkinson’s disease, 50% to 80% of the dopaminergic cells in the part of the brain called substantia nigra — which is responsible for coordinating movement — are already dead, possibly due to development of toxicity as a result of  aggregation of the alpha-synuclein protein.

“We have developed a new method for tracking early stages of aggregation of alpha-synuclein using super-resolution microscopy and advanced analysis,” Prof. Uri Ashery, head of TAU’s Sagol School of Neuroscience and Wise Faculty of Life Sciences, who co-authored the report, said. 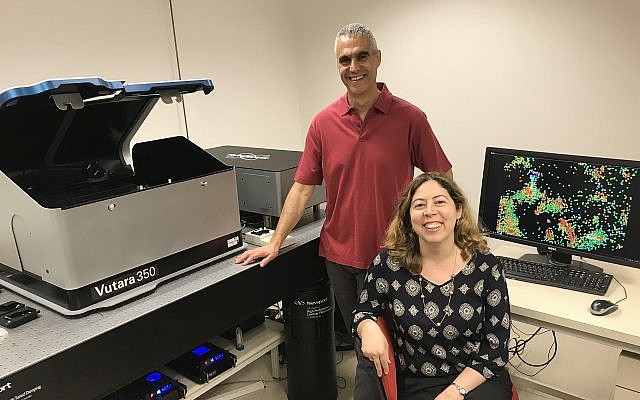 “Together with our collaborators at Cambridge University, who developed a special mouse model for Parkinson’s disease, we were able to detect different stages of the aggregation of this protein. We correlated the aggregation with the deteriorating loss of neuronal activity and deficits in the behavior of the mice,” Ashery said.

“This is a significant step forward in the world of Parkinson’s research,” he added.

According to co-author Dr. Dana Bar-On of the Sagol School of Neuroscience, early detection will allow closer monitoring of the effects of drugs on alpha-synuclein aggregation.

For example, researchers from TAU and from the Max Planck Institute in Gottingen and Ludwig-Maximilians-Universität München administered a drug called anle138b to diseased mice, significantly improving their pathology by delaying the protein aggregation.

“We hope that this research can be implemented for use in the early diagnosis of Parkinson’s in patients,” said Bar-On. “We’re currently working to implement the methods in a minimally invasive manner with Parkinson’s patients.”

The scientists are planning to expand their research to detect these biomarkers in human Parkinson’s disease patients.

“By detecting aggregates using minimally invasive methods in relatives of Parkinson’s disease patients, we can provide early detection and intervention and the opportunity to track and treat the disease before symptoms are even detected,” Ashery said.