TEL AVIV – The parents of a 15-year-old girl who was killed in a suicide bombing in Jerusalem in 2001 are calling on Congress to investigate why the terrorist behind the attack — Hamas’ first ever female jihadist — remains free in Jordan with her family and has not been extradited to the U.S.

Arnold Roth’s daughter Malki was among the 15 victims of the August 9, 2001 terror attack on the Sbarro pizza restaurant and one of two Americans to have been killed. A total of 122 people were wounded in the attack, including four Americans. Roth told The Algemeiner on Wednesday that he and his wife, Frimet, are calling on U.S. lawmakers to bring Ahlam Aref Ahmad Al-Tamimi to justice after Jordan’s high court refused an extradition order for her in 2017.

Tamimi was convicted for her role in the bombing in an Israeli court, but along with 1,000 other Palestinian terrorists, was released in a 2011 prisoner exchange deal for an IDF soldier held captive by Hamas, Gilad Shalit.

After her release, Tamimi returned to her birthplace, Jordan, and launched a career as a satellite TV host. On her show, Tamimi frequently boasts about her involvement in the attack, which included selecting the location for the maximum number of casualties as well as accompanying the suicide bomber to the restaurant.

“Being in Jordan has given me strength, because Jordan does not have an extradition agreement [sic] with the United States,” Tamimi told Al Jazeera in a March interview. “This led to the issuing of a legal decision refusing my extradition, and Jordan’s position on that matter is very clear.”

“Why am I, Ahlam, considered to be a terrorist, when I am part of a movement for freedom and national liberation?” she asked.

The U.S. issued a warrant for her arrest and a subsequent extradition order from Jordan, with which it signed an extradition treaty in 1995. However, in the 2017 ruling, Jordan’s top court said the treaty was never ratified by the Jordanian parliament.

According to the Algemeiner, the Roths’ anger at seeing Tamimi portray herself as a national hero has been further exacerbated by what they see as “politically-based interference” with US Department of Justice efforts to have Tamimi extradited. 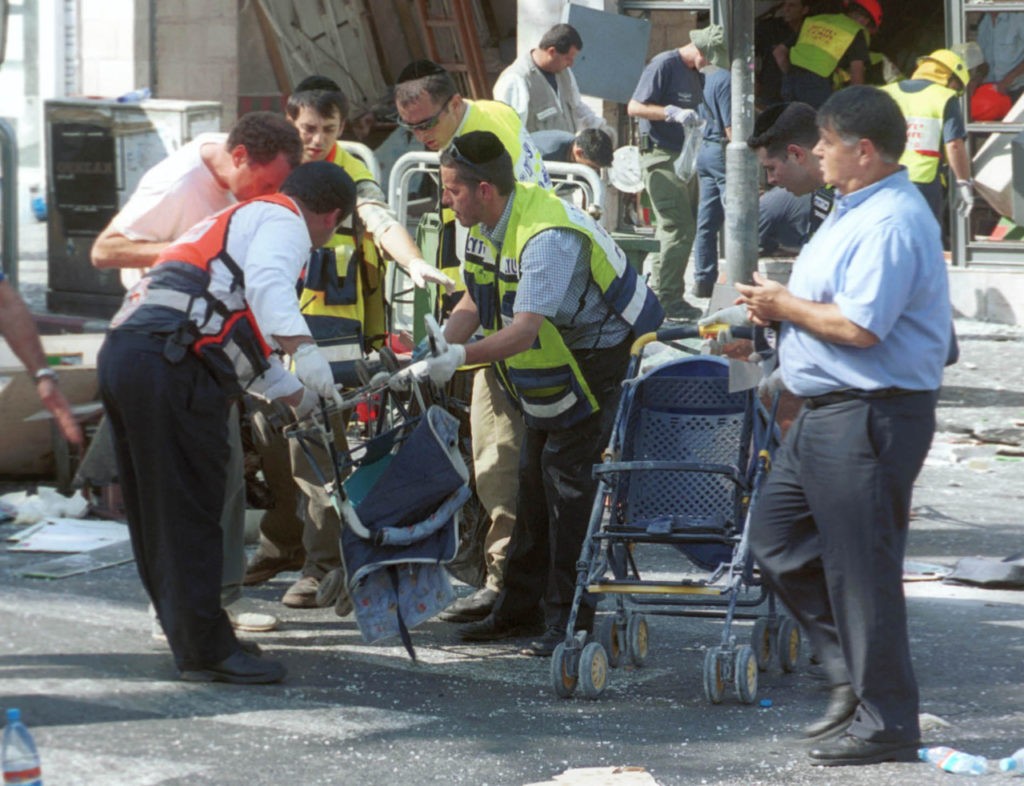 Israeli volunteers remove baby carriages from the scene of a Palestinian suicide bombing August 9, 2001 in Jerusalem, Israel. At least 18 people, including six children, were killed in the explosion, and more than 80 other people were injured in the blast at a Sbarro pizzeria. The bombing occurred at lunch time at the busy intersection of Jaffa and St. George”s streets in the heart of downtown Jerusalem. (Photo by Getty Images)

“To an extent that has surprised us, our interactions with American government officials have been unrewarding and often humiliating,” Arnold Roth told the Algemeiner. “State Department officials, including its diplomats, have been notably unhelpful.”

“Instead of seeing justice done, we have been witness to one arm of the US executive branch getting tangled up with another in what seem like turf wars, as the bomber grins and boasts in one worshipful media interview after another,” he said.

No one “has ever troubled themselves to respond to our questions and efforts to talk to them about this,” Roth said, adding that dozens of missives to government officials have gone unanswered.

“If I had to sum it up, my wife and I have been stunned — as victims seeking justice in a case where the highest levels of terrorism charges have been laid out, and where the fugitive is on the FBI’s ‘Most Wanted Terrorists’ list with a $5 million reward on her head — by how little respect officials have had for our questions,” Roth said.

Roth is hoping the House Judiciary Committee, chaired by Rep. Jerrold Nadler (D-NY), will launch a probe into how the government has been dealing with the Tamimi case file.

The Anti-Defamation League (ADL) has endorsed the calls for an investigation, with the ADL’s Washington director for international affairs, David Weinberg, saying that so far the efforts have been “inadequate.”

“One of America’s most wanted terrorists is still enjoying legal impunity in Jordan, and the responses we have received so far from the Jordanian government and the Trump administration are simply inadequate,” Weinberg told the Algemeiner.

“We strongly support congressional oversight to ensure that this travesty of justice is swiftly resolved,” Weinberg added.

An unnamed State Department official said that the U.S. was committed to bringing Tamimi to justice and noted that the 1995 extradition treaty with Jordan remains valid today.

Tamimi was “an unrepentant and dangerous terrorist who should be brought to justice for her role in the August 2001 bombing attack that killed two of our citizens and 13 other individuals,” the official told the Algemeiner.

“We will never forget the lives of Americans and others lost in the August 2001 attack planned and executed by Hamas terrorist Ahlam Ahmad al-Tamimi,” he said.

The report noted that the U.S. gave Jordan $1.7 billion in 2017 in foreign and defense aid, making it Jordan’s single largest provider of bilateral assistance.