Mina (Saudi Arabia) (AFP) — Muslim pilgrims took part Friday in the “stoning of the devil”, using sanitised pebbles in the last major ritual of the scaled-down hajj as Saudi authorities seek to prevent a coronavirus outbreak.

Massive crowds in previous years triggered deadly stampedes during the ritual, but this year only up to 10,000 Muslims are taking part after millions of international pilgrims were barred.

In the scorching heat, worshippers made their way across Mina Valley near Mecca in western Saudi Arabia under the watchful eyes of security forces, to symbolically “humiliate” the devil.

Hajj authorities offered the pilgrims pebbles that were sanitised to protect against the pandemic.

Friday also marks the beginning of Eid al-Adha, the feast of sacrifice.

Muslims traditionally slaughter sheep for the three-day holiday in tribute to the Prophet Abraham’s sacrifice of a lamb after God at the last moment spared Ishmael, his son.

Traditionally they consume some of the meat and give the rest to the poor.

Last year, Saudi Arabia’s King Salman made the trip to Mina and was seen on state-run television observing worshippers from the window of a high-rise.

But it was unclear whether he would visit this year.

The kingdom’s 84-year-old ruler left a Riyadh hospital on Thursday, authorities said, after a 10-day stay where he underwent surgery to remove his gall bladder.

The hajj, one of the five pillars of Islam and a must for able-bodied Muslims at least once in their lifetime, is usually one of the world’s largest religious gatherings.

But local media said up to 10,000 people already residing in the kingdom are participating in this year’s ritual, compared with 2019’s gathering of some 2.5 million from around the world.

The hajj ministry had initially said around 1,000 pilgrims will be allowed.

On Thursday, pilgrims scaled Mount Arafat for Koran recitals and prayers to atone for their sins in what is seen as the high point of the hajj.

“I am so happy to be chosen among millions for the hajj this year,” Saudi pilgrim Wedyan Alwah said before setting off on the climb.

“My lifetime dream has come true.”

They made their way down Mount Arafat to Muzdalifah, another holy site, where they spent the night before the stoning ritual.

In previous years, the ritual was not without risk as millions of pilgrims converge on a tight space and the pebbles often miss their mark.

Riyadh faced strong criticism in 2015 when some 2,300 worshippers were crushed, trampled or suffocated in Mina in the deadliest stampede in the gathering’s history.

Authorities have since reinforced safety and security measures.

After the stoning ritual, pilgrims will return to the Grand Mosque in Mecca to perform a final “tawaf” or circling of the Kaaba.

The Kaaba, the focal point of Islam, is a cube structure towards which Muslims around the world pray.

It is draped in a black cloth embroidered in gold with Koranic verses and known as the kiswa, which is changed each year during the pilgrimage.

The hajj began on Wednesday when pilgrims were brought inside the mosque in small batches.

They walked along socially distanced paths marked on the floor, in sharp contrast to the normal sea of humanity that swirls around the Kaaba during hajj.

“Health precautions have been thoroughly and meticulously implemented in all stages” to protect against the pandemic, Hussein al-Sharif, a senior hajj official was quoted as saying by the media ministry.

The hajj typically costs thousands of dollars for pilgrims, who often save for years as well as endure long waiting lists for a chance to attend.

But this year, the Saudi government is covering the expenses of all pilgrims, providing them with meals, hotel accommodation and health care, worshippers said. 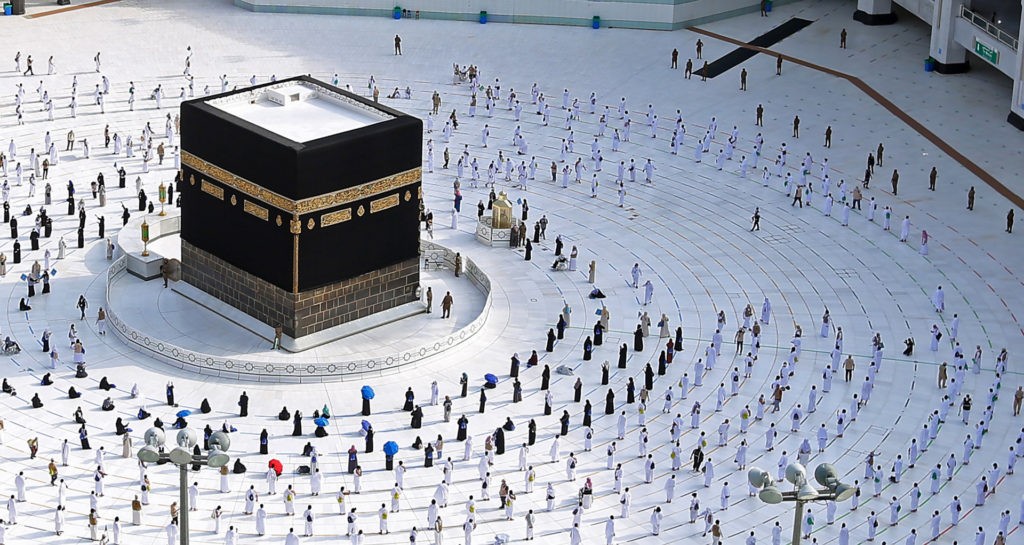 A picture shows pilgrims circling the Kaaba, the holiest shrine in the Grand mosque in the holy Saudi city of Mecca, on July 31, 2020 during the annual Muslim Hajj pilgrimage. (STR/AFP via Getty Images)