Ofra Moses was pregnant and a mother of four when she and her son Tal were killed when Muhammad Daoud threw a Molotov cocktail at their car in a 1987 terror attack. In a special report on December 9, PA TV reported the “heroic” terrorist had begun his “34th year in the occupation’s prisons,” referring to Israel.

There was no mention of Daoud’s crime. The news reporter charged Israel with “kidnapping” Daoud for no apparent reason. 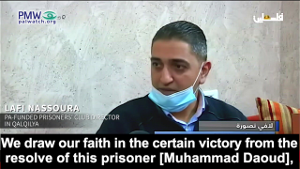 “On Dec. 8, 1987, with the outbreak of the First Intifada when young Muhammad Daoud was beginning his path in life, the occupation forces kidnapped him to be a prisoner in their prisons,” he said, according to a translation by monitoring group Palestinian Media Watch (PMW).

Lafi Nassoura, the director of the PA-funded Prisoners’ Club in Kalkilya said: “We draw our faith in the certain victory from the resolve of this prisoner [Muhammad Daoud], and from the resolve of all the heroic prisoners,” an oblique phrase often used to praise acts of terror without directly referencing them.

Nevertheless, Daoud is a recipient of the PA’s so-called “pay-for-slay” scheme paying monthly stipends to convicted terrorists and their families. According to PMW, Daoud has received upwards of $500,000.

Ofra’s husband and Tal’s father, Abe Moses, called on the payments to prisoners to stop.

Palestinians told an undercover Israeli journalist they prefer life under Israeli sovereignty to life under the Palestinian Authority. https://t.co/KLXORrSflM

“The treatment of the lowly murderer who burned my family and murdered Ofra and Tal as a ‘hero’ is shocking and unacceptable. I jumped into the burning car to save my family, but I was unable to get Ofra out, and she was burned to death right before my eyes and the eyes of our children,” Mozes told PMW.

PMW published its report hours after an Israeli mother of six, Esther Hurgen, was violently killed while out jogging in the Reiham Forest in the West Bank.

The Shin Bet security service announced on Thursday it had arrested a Palestinian suspect. Palestinian media reported that the suspect, a 36-year-old man from Jenin, had served time in Israeli security prisons.