Democrats pose as ardent champions of the 3 million ‘dreamer’ illegals — but they are deliberately sacrificing the illegals’ interest in a quick and narrow amnesty to better protect the continued chain-migration inflow of Democratic-leaning voters.

The Party’s chain-before-dreamer choice was made when Democrats rejected President Donald Trump’s four-part Framework offer to amnesty 1.8 million illegals in exchange for a gradual wind-down of the chain migration program which annually brings roughly 350,000 migrants into the United States.

Trump’s requirement for ending chain migration is the major obstacle to a deal. Democrats have largely accepted Trump’s demand for a wall and many also support a partial end to the visa lottery, although many still oppose to the border-wall legal reforms sought by Trump.

“Democrats are in a bit of a box because they’ve gotta say ‘No’ to a pathway to citizenship to 1.8 million because they’re upset about chain migration and the diversity lottery,” pro-amnesty Sen. Lindsey Graham said frankly on February 8.

The second-ranking Democrat in the Senate, Sen. Dick Durbin, made the same chain-migration-first statement on February 7, while redefining chain-migration of an immigrant’s siblings, parents, and adult-children as a family “reuniting”:

On the backs of Dreamers, the White House is attempting to radically slash legal immigration by prohibiting American citizens from reuniting with their parents, siblings, and children. This isn’t what America should stand for.

Democrats are being asked to blindly accept the Administration’s proposal to eliminate the diversity visa lottery and drastically limit legal immigration, in order to protect Dreamers. This goes against our nation’s values.

“We’re not going to allow draconian permanent changes to the immigration law in exchange for something that they claim to already want,” he said, referring to protecting the Dreamers. “They clearly want to cut the number of legal immigrants in half. That was never contemplated until about three weeks ago, other than by people like [Rep.] Steve King, and we are not seriously contemplating any such compromise.”

The cold calculation to favor chain migration over a quick amnesty is shared by House Minority Leader Rep. Nancy Pelosi. She delivered an emotional, eight-hour speech favoring illegals over Americans just as Capitol Hill leaders announced a cross-party budget deal which gave up the Democrats’ political leverage in amnesty politics.

The Democrats’ choice to put chain-immigration above an amnesty shows that the ‘dreamers’ are merely theatrical props for the Democrats’ self-serving immigration strategy, said Jessica Vaughan, policy director at the Center for Immigration Studies.

If the young illegals were organized to serve their interests, they could endorse an amnesty-for-reform deal with Trump and the GOP, she said. But they cannot make that deal because “they’ve lashed themselves to the progressives and they cannot untie the knot,” she said. Without the ability to make a deal for themselves, “they’re nothing but props for the Democrats.”

Chain migration is prioritized by Democrats because it brings in several hundred thousand Democratic-dependent voters each year, allowing them to slowly turn red states into blue strongholds, such as California. That motivation was recently acknowledged by the influential progressive writer, John Judis:

The Democratic legislators’ preference for a continued future inflow of Democratic-leaning voters is mirrored by progressive advocates, including Indivisible, the National Immigration Law Center and United We Dream, which jointly declared January 8 their support for the failed, 17-years-old, no-strings Dream Act amnesty instead of Trump’s amnesty offer:

We urgently need a narrowly-tailored solution that addresses the crisis Trump created, without putting families at risk or reducing people’s lives to a bargaining chip. We need the bipartisan Dream Act now.

Immigrant advocate Rep. Luis Gutierrez declared January 31 that “The White House agenda is to gut legal immigration in exchange for allowing some of the Dreamers to live here. For those of us who support legal immigration, and that’s most Democrats, it won’t fly.”

I'd put it differently: the White House pushing for huge cuts to legal immigration is what stands in the way of the President getting both a bipartisan deal to protect Dreamers and (much of) the funding he wants for the border. https://t.co/O472toj0mc

America doesn’t have the world’s strongest economy in spite of immigration — it’s because of immigration. And we can’t afford to change that. https://t.co/hYgv11f6B0

Skilled labor remains a challenge for Dunkin’s franchisees, and Travis emphasized the need for immigration reform. “We need more people. Talking to Democrats and Republicans, there seems to be a fair amount of agreement that it needs to be split between the amount of security and letting all people come into the country and becoming citizens — all we’re asking is to increase the labor pool.”

Business advocates use economic “growth” as their euphemism for mass immigration, including chain migration. The phrase is used because business growth is aided by the annual inflow of 1 million of new immigrants, who double as cheap workers and taxpayer-aided consumers.

The semi-hidden sacrifice of the ‘dreamers’ by Democratic and business elites has been noticed by some of the 3.25 million young illegals, most of who work in low-status, low-wage blue-collar jobs — but who have no political group to champion their own interests. The San Francisco Chronicle reported January 26:

Marissa Montes, co-director of the Loyola Immigrant Justice Clinic in Los Angeles … has noticed in recent weeks that [DACA] recipients have sounded more and more likely to back a wall — and even, at times, cuts to family-based migration that Trump and other conservatives favor — in exchange for citizenship …

The Chronicle quoted one example:

Ana Rodriguez, a 26-year old who lives in Union City and works at a day care center … With time running short, Rodriguez said, “I’m sure a lot of us will say go ahead and build the wall if that’s what’s gonna let us continue living our lives.”

She added, “We just want to live in peace like everyone else.”

The young illegals have minimal political influence. ‘DACA’ approved illegals graduate college at one-quarter the rate of Americans, most work in blue-collar jobs, roughly one-quarter of ‘dreamer’ illegals are unable to speak English, and young ‘dreamer’-age illegals are arrested for crimes at twice the rate of Americans. Their economic clout is minimal — DACA illegals collectively pay only $2 billion in Social Security taxes — and they are most valued by business for their ability to depress blue-collar wages.  This weak foundation leaves the illegals without any political group solely working to win a quick amnesty. 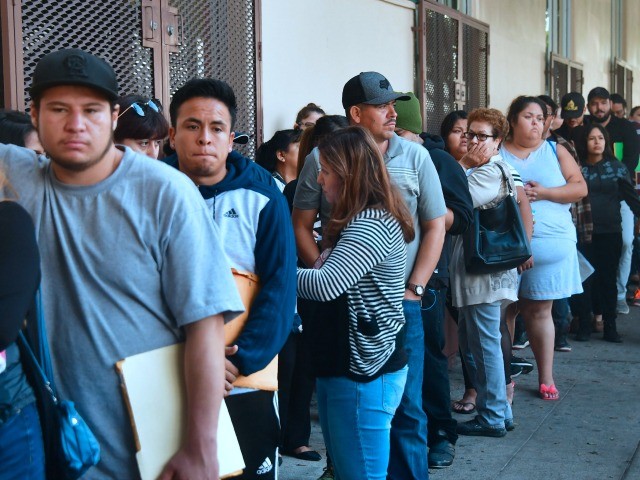 For example, many college-graduate ‘dreamer’ illegals have been brought to Washington to lobby by FWD.us — but that group was formed by business interests to preserve the inflow of cheap-labor college graduates and the larger inflow of chain-migration immigrant consumers. Throughout 2017 and 2018, FWD.us has successfully used the Dreamers to distract U.S. media professionals from Trump’s proposals to reduce the inflow of cheap professional-grade guest workers.

Similarly, the United We Dream group is run by Lousie Weissman, a veteran left-wing political activist who has been a manager for the SEIU union and the National Law Center on Homelessness & Poverty law firm.  The SEIU and the National Immigration Law Center jointly created UWD in 2008. At an emotional rally in November 2012, the picked leaders of the group persuaded the membership of young illegals to subordinated their interest in a narrow amnesty to demand a broader amnesty for most illegals in the United States, said a sympathetic 2012 report by the New York Times:

The leaders of the United We Dream network, the largest organization of youths here illegally, decided to push President Obama and Congress next year for legislation to open a path to citizenship for them and their families. The move will increase pressure on Mr. Obama and lawmakers to pass a comprehensive overhaul, rather than taking on the debate over immigration in smaller pieces to try to gain more support among Republicans.

The network’s platform calling for an “inclusive pathway to citizenship,” which the leaders adopted unanimously in a vote on Sunday morning, is likely to have a large influence on the debate Mr. Obama said he planned to kick off soon after his inauguration in January.

Unsurprisingly, that ambitious 2013 push for a national amnesty failed, leaving the younger illegals still without a deal.

DACA illegals do not have their political group to push only for their political interests via a narrow amnesty. They are left to serve as a sympathetic, colorful and media-friendly front for the Democratic and business groups who prioritize the very unpopular goal of mass immigration. Trump’s 2016 immigration policies are very popular among the public, including among blue-collar African-Americans who are a core element of the Democrats’ current electoral base.

In contrast, business groups, Democrats, and the establishment media tout misleading, industry-funded “Nation of Immigrants” polls which pressure Americans to say they welcome migrants, including the roughly 3 million ‘dreamer’ illegals.