In a series of tweets, the group identified itself as “Cyber Caliphate” and vowed to share sensitive American military information. “We won’t stop! We know everything about you, your wives and children,” read one tweet.

In addition to distorting Central Command’s Twitter page, the hackers left a message on Pastebin, a site known to often be used by hackers to share information they have stolen. The message has URLs to documents they claim has information stolen from U.S. military computers. The message also claims that the group functions “under the auspices of ISIS” and declares the hacking retaliation for U.S. strikes on ISIS targets in Syria and Iraq.

The message mentions Afghanistan, too, after senior members of the Pakistani Taliban pledged allegiance to the Islamic State in a video circulating on social media.

The documents subsequently posted show the names and contact information of the heads of U.S. Army Forces Command in Ford Bragg, North Carolina, Fort Eustis, Virginia, and Red Stone Arsenal, Alabama. They also posted what appeared to be a list with contact information for retired generals.

The cyber attack occurs just as President Obama delivers an address on improving United States cyber security, proposing two new bills to enhance the nation’s ability to thwart these sorts of attacks. The speech, The Hill notes, would address cyber security in the wake of a major hacking of the Sony corporation, widely believed by United States security sources to have been orchestrated at least in part by the North Korean government.

While little is known about the “Cyber Caliphate” group– including whether or not they are officially working with Islamic State leaders or merely supporters working independently with the blessing of said leaders, they have risen to prominence in the last week in the United States after a number of similar hackings of American media outlets. Last week, the group attacked two news organizations— one in Maryland and one in New Mexico– and replaced their Twitter artwork with the same page seen at press time at @CENTCOM– the Islamic portrait with the words “i love you isis” written on the lefthand side. Both news organizations expressed confusion as to why they would be targeted for such an attack.

Update, 1:08 PM EST: After posting several pages of documents on U.S. responses to scenarios in which China hacked the United States, the @CENTCOM account was suspended from Twitter.

Update, 1:21 PM EST: It appears that Cyber Caliphate has also hacked a YouTube account associated with Central Command. The same “i love you isis” header image appears on the YouTube page, and the videos have been replaced by three uploads from the group, titled: “O Soldiers of Truth Go Forth,” “FLAMES OF WAR ISIS VIDEO,” and “Airstrike against an ISIL warehouse, Dec. 29, near Fallujah, Iraq.”

“O Soldiers of Truth Go Forth” appears to be a propaganda film by the Al Hayat Media Center, the English-language production company run by the Islamic State. It features a montage of soldiers with various catchphrases appearing over the Islamic State “theme song,” including “Rabbis will be humiliated” and “break the crosses and destroy the lineage.”

The airstrike video is the only one which appears to have been uploaded by U.S. Central Command. It is unclear why the hackers did not delete the video and replace it with propaganda. 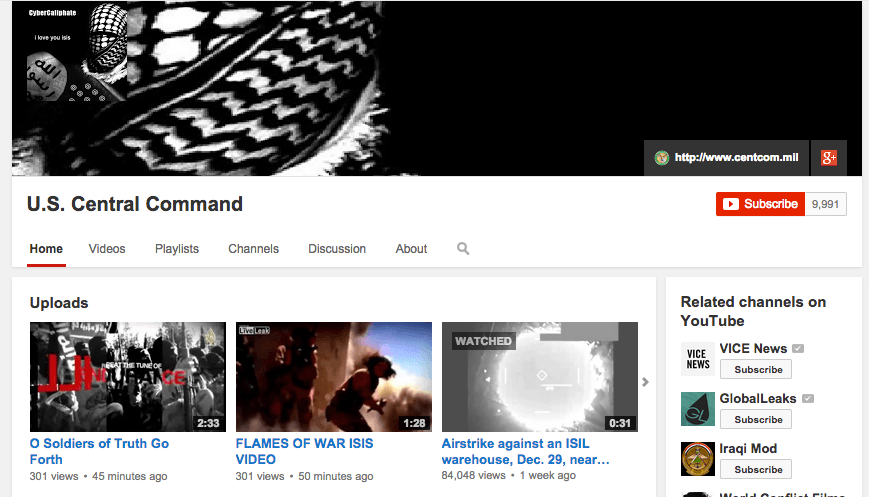 Defense officials tell CNN that it does not appear that anything published through the hacking on either site is of a classified nature.