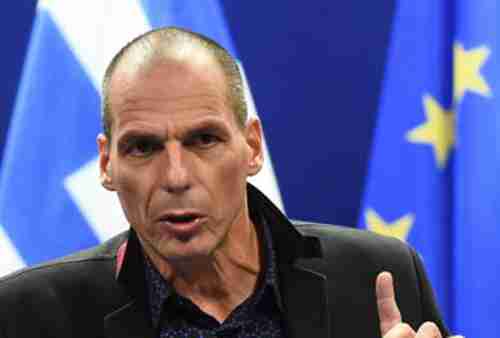 A meeting on Monday in Brussels by the Eurogroup, the eurozone finance ministers, which was intended to reach agreement on Greece’s financial crisis, ended hours earlier than usual in bitter acrimony.

Greece has been asking for a “bridge loan” — enough money to survive for six months, but without having to continue the harsh austerity requirements that accompanied the 240 billion euros already loaned to Greece in the bailout program. Europe has rejected this proposal, and given Greece a “take it or leave it” ultimatum to extend the existing bailout program. The European statement said the Greeks must continue with austerity on “tax policy, privatization, labor market reforms, financial sector and pensions.” Indeed, any substantial change in Europe’s position would require a vote in the German, Dutch, Finnish and Slovak parliaments.

Greece’s new finance minister, Yanis Varoufakis, from the radical far-left Syriza party, made a bitter statement to the press. In it, he referred to the European proposal as “an extension of the current program,” calling it “absurd and unreasonable.” Indeed, any back-down by Greece’s newly elected government would cause a backlash in Greece’s public, and a sharp plunge in the new government’s poll ratings.

Greece has only two weeks left to come to some agreement, before a huge bond payment comes due. The Greek government is not allowed to borrow money or issue government bonds. The bailout funding has been suspended, because the Greek government has said it no longer wants to cooperate with the bailout program. The Greek government only has tax revenues to live off of, which will not be enough to pay public sector salaries or pensions, which the new government wants to increase and make debt payments. And Greece’s banks are bleeding deposits by two billion euros per week.

According to reports, Greece accepts 70% of the committed austerity requirements, and rejects 30%, but hasn’t revealed which requirements are in each category. Some hope that this can form the basis for a compromise.

The Eurogroup has given Greece a Friday deadline to agree to the bailout requirements. The sides are headed for a collision, unless they can quickly figure out a way to kick the can down the road. Kathimerini (Athens) and Telegraph (London)

Egypt’s army announced on Monday morning that it has conducted air strikes against militant targets in Libya, including training camps in arms depots. The airstrikes were revenge attacks after a terror group linked to the Islamic State (IS or ISIS or ISIL or Daesh) released a video portraying the beheading of 21 Egyptian Coptic Christian fishermen who had gone to Libya to earn money to send back home. Egypt’s president Abdel al-Fattah al-Sisi had on Sunday given a nationally televised address wherein he vowed to choose the “necessary means and timing to avenge the criminal killings.”

Egypt is now facing a two-front war against terrorist groups linked to ISIS. The terror group Ansar Bayt al-Maqdis (ABM – Ansar Jerusalem – Champions of Jerusalem) has conducted numerous attacks in Egypt’s Sinai, along the border with Israel and Gaza, and has recently changed its name to “Sinai Province,” meaning “Sinai Province of Islamic State” when it repudiated its allegiance to al-Qaeda and declared its allegiance to ISIS.

Egypt is fighting ABM with ground troops is Sinai, and for that reason it’s believed that Egypt does not have the military resources to send ground troops into Libya. For that reason, Egypt, France and Italy are calling on the United States and the international community to resume military action in Libya. Al Ahram (Cairo) and CNN

Muslim versus Muslim wars in the Mideast continue to grow

There is a tendency to view this situation as similar to the rise of Hitler and the Nazis, with ISIS leader Abu Omar al-Baghdadi taking on the role of Hitler, commanding armies all over the Mideast. But from the point of view of Generational Dynamics, that is not what’s going on.

Much (though not all) of the Muslim world is deep into a generational Crisis era, with the last crisis being the collapse of the Ottoman empire, followed by wars of consolidation in the 1920s-30s. Based on historical research that I have been doing for years, countries and societies suffer increasing societal breakdowns as the decades pass since the end of the previous generational crisis war. The “Arab Spring” that started in Tunisia in 2011 was the first major societal breakdown in the Muslim world, and what we are seeing is an increasing societal breakdown.

So, in my opinion, what we’re seeing is not the formation of a unified ISIS army waging war against other Muslims, at least not yet, but a general societal breakdown where local, individual terror groups like Ansar Bayt al-Maqdis and Ansar al-Sharia find it convenient to declare allegiance to ISIS for public relations purposes.

Ironically, instead of a unified ISIS army, what we may be seeing is the mirror image. The “moderate” Arab nations have been notably reluctant to take part in the U.S. anti-ISIS coalition. However, what ISIS’s public relations stunts have accomplished is an increased realization of many Arab countries, including Jordan, United Arab Emirates (UAE), and now Egypt, to understand that their national security depends on fighting ISIS and terror groups linked to it. Al Ahram (Cairo) and Independent (London)

Last June, when IS militias attacked Mosul, the Iraq army just dropped its weapons and ran away. Now, according to prime minister Haider al-Abadi, the Iraq army has been scoring successes, pushing back ISIS from areas across Iraq, although ISIS still controls about a quarter of Iraqi territory. According to Abadi, Iraq is planning an offensive this year to recapture Mosul from ISIS. Although US ground troops will not be needed, Abadi said the operation’s success would also hinge upon close co-ordination between Iraqi security forces, the US military, and the Peshmerga. BBC