LOS ANGELES, California — Between 50,000 to 100,000 Armenians took to the streets of Little Armenia on the centennial anniversary of the day that marked the start of the Armenian genocide 100 years ago. 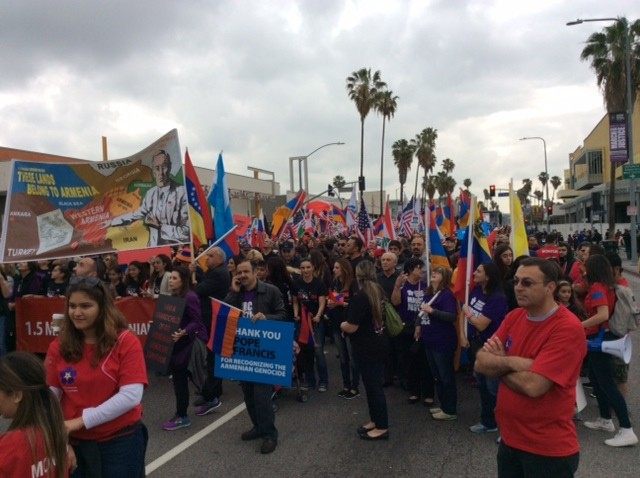 The atmosphere was thick with an energy of enthusiasm from those in attendance who braved the chillier weather, which is uncharacteristic of Los Angeles during this time of year, to voice their concerns over the lack of formal recognition of the loss their people suffered years ago.

The five-mile march began at Sunset Boulevard and Western Avenue and ended at the Turkish Consulate on Wilshire Boulevard; 19 organizations had helped to organize Friday’s event. The majority of businesses were closed in recognition of it.

“It’s shameful and disgraceful, not just as an Armenian-American but as an American” that President Barack Obama refuses to call the atrocity a genocide, Elen Asatryan told Breitbart News. Asatryan is the Executive Director of the Armenian National Committee of American Western Region. She was born in Yereman, Aremenia, and her family moved to the United States in 1993. “The U.S. is the world leader and should be taking a stance on this,” she said. 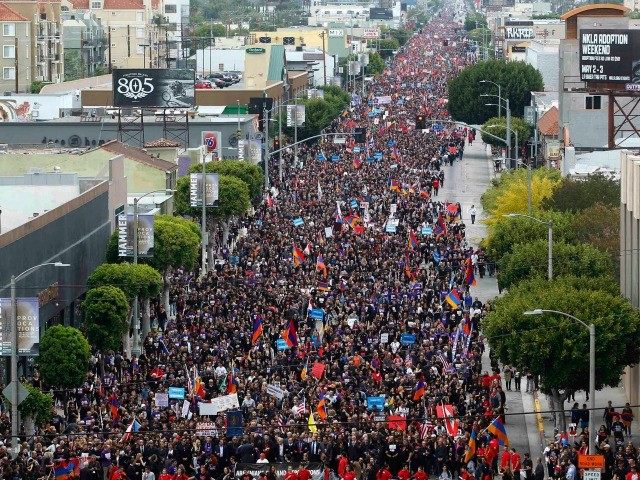 Asatryan said not recognizing the Armenian genocide as such is “denying a very important and proud part of American history.” She recalled how under the leadership of America’s 28th President Woodrow Wilson, the first U.S. Congressionally-sanctioned humanitarian organization was formed. It is now known as the Near East Foundation. “For 15 years the American people and the U.S. Government raised $117 million to save the Armenians. They saved 132,000 orphans and set up over 400 orphanages. To deny the Armenian genocide or not to acknowledge it, is to deny the efforts of the American people for so long,” Asatryan said. She also claimed that “Turkey’s position with ISIS nowadays really shows that they haven’t changed their ways. Turkey currently facilitates and assists ISIS in its efforts.”

Raz Migsarkissian of the Armenian Youth Federation (AYF) said he was elated that a resolution calling for the University of California Board of Regents divest from the Republic of Turkey passed at both UCLA and UC Berkeley this year.

“Students are tired of being complicit in genocide denial,” he told Breitbart News. When asked for a reaction to President Barack Obama’s decision to go back on his promise of labeling the event which took place 100 years ago today in Ottoman Armenia as genocide, Migsarkissian said he’s “not surprised. Turkey is one of the United States’s largest allies. The U.S. has military bases in Turkey that are on occupied Armenian territory.” He said that the Armenians are less concerned with recognition and are not focused on getting reparations for the act their relatives had endured. 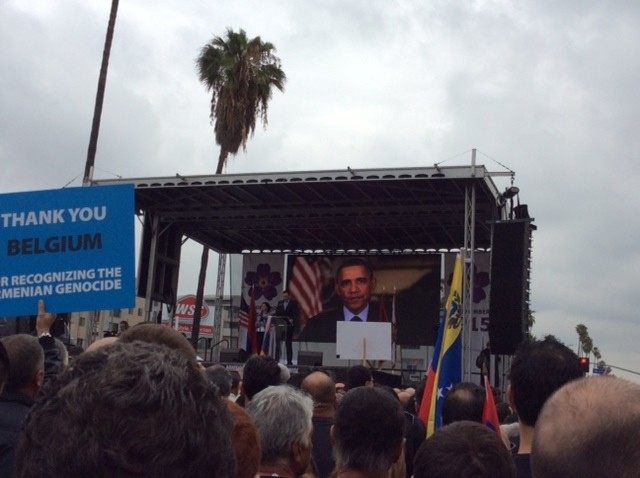 Migsarkissian’s sentiments were echoed by two other college students who were also present at the massive demonstration. Cousins Aleen and Vani Khamo recounted to Breitbart News how history classes at their schools make no mention of the Armenian genocide. “I’ve taken history classes at Cal Poly Pomona and at Fullerton and they haven’t referenced it at all,” Vani said. When asked if they learned about it during high schoo,l they said “they did reference it in high school, but as a massacre,” and not a genocide. “It was just a paragraph, a quick reference. It wasn’t a lesson,” they said.

Many in attendance sported T-shirts and pins with purple “Forget Me Not” flowers on them; a symbolic gesture to remind those in solidarity with the day’s cause to recall the tragedy that struck the Armenian people years ago.

Although the vast majority of those in attendance were Armenian Christians, there were large pockets of members from other religious organizations also present to show their support. 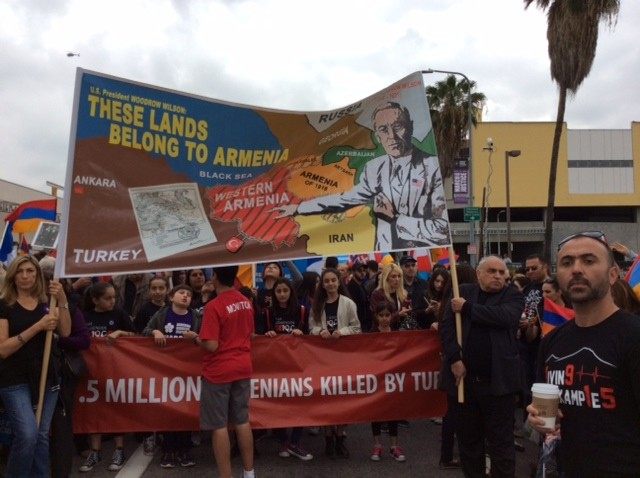 Father Christopher Kelley of St. Mary’s Anglican Church in Hollywood was also present. He equated Turkish President Recep Tayyip Erdoğan decision to recall Turkey’s ambassador to the Holy See following Pope Francis’ decision to call the Armenian tragedy a genocide to a “petulant, juvenile tantrum.” He told Breitbart News, “Until Turkey frankly admits what the Ottomans did, it remains a blot on the Turkish soul. And as the Republic of Turkey participates in the denial of it, it stains them irreparably.”

Joseph Radparvar, a financial advisor who proudly practices Orthodox Judaism and is a staunch Israel supporter was also present at the protest. He told Breitbart News that his participation in the 100-year anniversary march to “protest against Armenian genocide denial” was “one of the most important things I’ve ever done in my life. It’s important to take a stance, especially when the President of the United States fails to fulfill his promise to acknowledge the genocide in what is a blatant attempt to appease the Turkish-Iranian power block.”

He continued, “As an observant Jew, I wanted to make a statement to my Armenian brothers and to the world that Jews and Israel stand for peace and justice and unity, particularly in light of the rampant antisemitism which has been so pervasive over the past few years.”