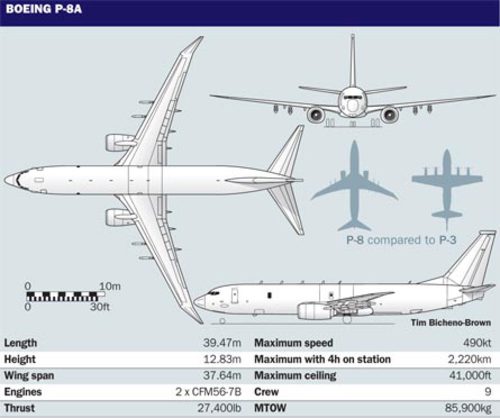 In a serious new escalation of tensions between China and the United States in the South China Sea, China’s navy on Wednesday demanded on eight occasions that an American surveillance plane in the South China Sea leave the area immediately. The surveillance plane was swooping over man-made islands that the Chinese military has created with the apparent intention of building military bases in international waters.

The surveillance mission was top secret, but the confrontation was revealed because a CNN reporter had been granted permission to join in the surveillance flight.

The surveillance plan was the US Navy’s new Boeing P-8A Poseidon anti-submarine patrol aircraft. According to the Navy, the new aircraft “will transform the way the service performs its anti-submarine warfare (ASW), anti-surface warfare, intelligence, surveillance and reconnaissance missions for broad area, maritime and littoral operations.

Last year, a Chinese jet fighter made several passes as close as 30 feet to a U.S. surveillance plane in international waters. The incident was reminiscent of an April 2001 encounter, when a Chinese F-8 interceptor smashed into a U.S. surveillance aircraft in international waters in the South China Sea. The Chinese aircraft crashed into the sea, and its crew was killed. The U.S. plane made an emergency landing on China’s Hainan Island, and its 24 crew members were imprisoned for 10 days.

As we wrote last week, the US has has announced that the US military will use its aircraft and Navy ships to directly confront China in the South China Sea. The US is conducting its surveillance flights over international waters, but China is claiming that it has sovereignty over the entire South China Sea, meaning that regions that have been international waters for centuries are now being claimed as Chinese sovereign waters.

As I wrote last week, what we’re seeing is the kind of tit-for-tat escalation that leads to full scale war during a generational Crisis era, when nationalism and xenophobia are at their highest. At some point, as actions escalate, one side or the other will, by miscalculation, by accident or by intention, take a military action that requires a response, and then things can spiral quickly out of control.

The Chinese themselves certainly understand that. In fact, one of the Chinese warnings to the US surveillance craft on Wednesday was:

One or two “misunderstandings” could lead to full-scale war. CNN and FlightGlobal

Claims of ISIS activities in Pakistan doubted by officials

On May 13, in a suburb of Karachi, the huge port city in the south of Pakistan, terrorists attacked a bus carrying Shias of the Ismaili ethnic group. According to the police report, “The gunmen stopped the bus and first fired at it from outside. Then they entered inside the bus and opened fire indiscriminately. After that they checked to see if anyone was left uninjured.” 45 Ismailis were killed, and 24 injured.

The terrorists left behind leaflets written in English accusing Shias of “barbaric atrocities,” and warning “Advent of the Islamic State!”

Jundullah, a splinter group of Tehrik-e-Taliban (TTP – Pakistan Taliban) that has supposedly switch allegiance to ISIS , has claimed responsibility for the attack. However, Pakistan officials are raising several doubts about the claim.

Jundullah has claimed responsibility in the past for a number of terrorist activities, and in its statements has vowed to exterminate all Shia Muslims. However, some of these claims of responsibility have turned out to be false. Furthermore, this Jundullah organization claiming responsibility for the Karachi attack is clearly a different organization than the previous Jundullah of Sunni militants of Iranian Baloch descent involved in past attacks in Iran’s Seistan-Balochistan province.

Finally, this Jundullah’s relation with ISIS is also called into question. Any individual or organization in the world can announce that it’s affiliated with ISIS, and this has led to exaggerated claims that “ISIS is now in 100 countries around the world.” But that doesn’t mean that Jundullah or any of these organization has any actual connection with ISIS, and Pakistani officials are claiming that investigations have uncovered “no evidence of any money trail of any kind” showing a connect between ISIS and any Pakistan terrorist organization.

However, none of that is any comfort to the family and friends of the people who were killed in Karachi on May 13. In fact, what it seems to mean is that Pakistan security forces have no idea who committed the May 13 terror attack, which is not good news when Pakistan seems increasingly victimized by the very terrorist organizations that its intelligence services have funded in the past. The News (Pakistan) and South Asia Terrorism Portal (India) and Reuters and Pakistan Today

As the June 30 deadline approaches for America and the West to reach a nuclear deal with Iran, Iran’s Supreme Leader Ayatollah Seyed Ali Khamenei seems to be confident that he can force the US to make any concession he wants, because the US is so anxious to get this deal.

On Wednesday, Khamenei announced that he will not permit any inspections of Iran’s military centers, or to talk with nuclear scientists:

“As said before, no permission will be given for inspections of any military centers and for talks with the nuclear scientists and other sensitive fields of study and intrusion into their privacy. …

The flagrant and shameless enemy expects us to allow them to talk to our scientists and researchers about a fundamental, indigenous advancement; however, there will absolutely be no such access… I will not allow foreigners to come in and interrogate the dear and distinguished scientists and sons of this nation.”

The comments were broadcast live on state TV. If the U.N. International Atomic Energy Agency (IAEA) inspectors are not given access to Iran’s scientists and military centers, Iran will be able to develop nuclear weapons technology without being detected. President Obama has guaranteed that deep, thorough IAEA inspections will be part of any nuclear deal. Reuters and AEI Iran Tracker