The Boston Globe reports that a Middle Eastern man in his 20s who was under surveillance by a joint counter-terrorism task force was shot during a confrontation with an FBI agent and a police officer in Roslindale on Tuesday morning.

“He was on foot, under surveillance,” said Boston police commissioner William Evans. “The officers have been surveilling him and again they wanted to speak to him… and he turned and our officers gave several commands for him to drop the weapon and unfortunately he came at the officers and they did what they were trained to do and that’s never an easy decision for any officer to make.”

According to Evans, the suspect was armed with “a large military-style black knife” which he refused to drop, despite repeated instructions from the law enforcement officers. The FBI says both their agent and the Boston police officer fired on the man when he attacked them. 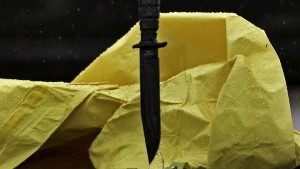 Photo of the knife carried by the suspect, courtesy of the Boston Globe

“All we know is the joint terrorism task force was on this guy and when they confronted him to speak with him he turned and came at the officers and unfortunately he was shot dead,” said Evans.

The Globe describes police officers “swarming” the shopping plaza where the shooting occurred, hoping to obtain security camera video that might provide a clear record of the incident. Boston mayor Martin J. Walsh also visited the scene, demurring comment to the Boston Police Department and FBI.

WHDH News in Roslindale says the police have roped off the apartment where the suspect was believed to reside. A neighbor said the suspect “lived next door to him for about two years, along with two males, a female, and the suspect’s mother.”

This neighbor described the suspect as generally pleasant enough, at least to him – he said the suspect once told him “he liked him because he treated him better than most other Americans did” – but said he seemed unusually guarded and nervous during a brief encounter at the local pharmacy on Tuesday morning.

NBC News identifies the suspect as Usaama Rahim, and says  the authorities were investigating whether he “had become radicalized by ISIS-inspired social media messages.”

“Federal and local sources stressed they did not believe there was a threat to the general public during the investigation,” the report adds, offering a somewhat optimistic perspective on a man who was just shot because he charged at a police officer and FBI agent with a large knife.