Japan’s long-standing policy of self defence may be on the verge of being swept away, unleashing onto the world stage one of the most powerful militaries in the world for the first time in 70 years. 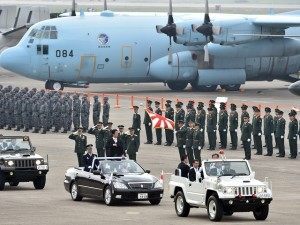 New legislation designed to override the constitution and allow the Japanese defence forces to engage in conflicts around the globe at the behest of key military ally the United States has been passed by a lower house committee. It will be voted on today.

Japan adopted a policy, enshrined in their constitution, of only ever using its armed forces for self defence after their enormous military defeat at the hands of the United States in 1945. The restyled Japan Self Defence Force (JSDF) remained for the remainder of the 20th century a comparatively modest force – but that has all been changing over the past decade as Japan prepared to stand up against an expansionist China. Although they spend only once percent of their GDP on defence, the JSDF is one of the largest and most potent armed forces in the world – even if it remains untested in combat.

The Japanese defence budget is now the highest it has been at any point since the second world war.

While the military will remain a defence force, and the nation will still be limited to defensive wars, the new law would allow the military to be deployed to protect allies by creating provision for ‘collective defence’, a deeply controversial prospect that has divided Japan. Prime Minister Shinzo Abe insists dissent over the matter is purely down to “substantial misunderstanding” of the law change by the public, and that he will press on with changes while working harder to educate the nation, reports abc.net. 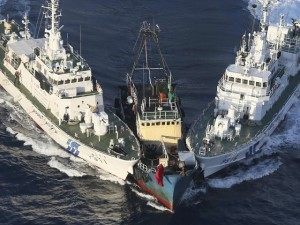 The prevailing defence arrangement has left Japan with an unusually large and militarised coastguard which it has deployed against China to prevent giving the impression of an armed conflict in the South China sea over disputed islands and territorial waters. China has returned in kind. Until 2013 it had seven disparate paramilitary coastguards, including fisheries protection, armed scientific ships and customs vessels all ready to take Japan’s coastguard on. They have since all been reorganised into a unified force – an act seen as provocative in Japan and elsewhere.

Breitbart London reported on the remarks of Ambassador Wu Jianmin, who sits on China’s influential Foreign Policy Advisory Group, when he spoke in London in June. Remarking on Japanese and American unease over China creating artificial Islands in the South China Sea, the ambassador said the West was being very hypocritical, as China was now only doing something other nations had been doing themselves for decades without complaint.

Update: Japan voted this morning to approve the bills authorising the deployment of forces abroad despite mass demonstrations outside parliament. They will now have to pass the upper chamber.