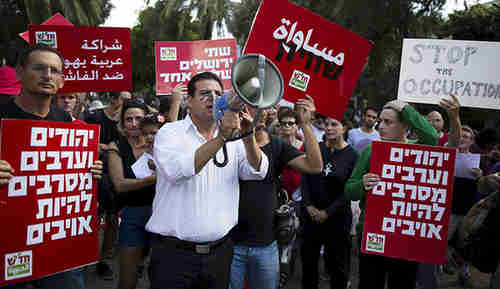 The split among Israeli Arab politicians made front page news earlier this month when Ali Salam, the Palestinian mayor of Nazareth, accused the Arab MKs (Members of Knesset or Parliament) of inciting Palestinian violence, saying, “I blame the leaders. What is happening is not appropriate. It is just ruining our future, ruining our coexistence.”

The incident occurred on October 10, when Arab MK Ayman Odeh was being interviewed for a TV appearance. Salam interrupted the interview as it was being filmed, and yelled:

Salam was referring to the fact that the recent Palestinian violence has led to a sharp drop in Jewish customers, resulting in complaints from local business owners.

Ayman Odeh is the leader of the “Joint (Arab) List” political party, formed last spring as an alliance of four predominantly Arab parties with members in the Knesset. When the alliance was formed, Odeh said:

We are the only party that talks about national and social rights for both Arabs and Jews.

In the ensuing months, few Jews have joined the party, and Joint List members have been accused of inciting Palestinian violence against Jews, even by other Arabs. Mayor Ali Salam’s vocal confrontation with Odeh on October 10 has highlighted those criticisms.

However, another Arab MK, Zouheir Bahloul, who not to a Joint List party but to the Zionist Camp party provides a detailed explanation of the controversy from his point of view:

I don’t want to be the Joint List’s defense attorney, but you can’t say that they are Jew-haters or spies or a fifth column in the Knesset. However, when I decided to go into politics, I joined a typical Israeli party and not a clearly Arab party. I want to be legitimate in the inner Israeli discourse that operates without angry tones and raised voices, because I’m sick and tired of this stuff. I also think that most of the Arab public wants to create a new discourse with the Israeli public. So while it’s true that the Joint List’s [election] achievement is unprecedented, that is mainly because the Arab dream of going to the elections as one united bloc has finally been realized. …

[With regard to the feud between Ali Salam and Ayman Odeh] I didn’t like the style, but I liked the debate. This discourse is very important, even if it wasn’t conducted in the spirit of [late Israeli etiquette guru] Hana Bavli. It was important to activate the discussion within the Arab minority in Israel. Although the Jews loved this split, naturally, and completely identified with Ali Salam, its importance is internal [within the Arab sector]. For years and years, no discourse has been conducted within the Arab minority that emphasizes what is supposed to appear on its public agenda. This confrontation showed that the Arab sector is not one homogenous, herd-like minority. The Arab minority is pluralistic and diverse, although it always tried to appear homogenous vis-a-vis the Israeli public, which is a mistake.

However, as I have pointed out in the past, (e.g., “18-Oct-15 World View — Palestinian ‘Oslo Generation’ relationship with Israel extremely toxic and explosive”), there is no longer any real opportunity to resolve this debate politically. The young “Oslo Generation” of 15-22 year old youths who grew up after the 1993 Oslo Accords, which they view as having been worthless, no longer even want to listen to any politicians, including Palestinian president Mahmoud Abbas, or Israeli Arab MKs. They are looking for a leader who will take them to war against the Israelis, and at some point, such a leader will emerge. Memri and Al Jazeera (29-Mar-2015) and Al Monitor and Jewish Press

Widespread riots and demonstration by Israeli Arab citizens began on October 1, with organized protests in most of the Arab communities, including dozens of instances of blocking roads with burning tires, as well as hurling rocks and firebombs and police and civilian vehicles.

However, the riots have stopped almost as quickly as they started, according to a police spokesman:

For two weeks, there was an awakening and an intensification of the protests and riots. But for the last week and a half there has been utter quiet in the Northern District.

The reason is that they fear a social backlash and economic boycott from the Jews in the Israeli society, something that deeply hurt the Arab community when the intifada began in 2000. For example, mail deliveries may cease in Arab communities over fears for the personal security of those delivering the mail. Similarly, deliveries of food and equipment to Arab communities could be curtailed.

These are difficult times for the 1.7 million Palestinian citizens of Israel, about 20% of the country’s population. According one Arab restaurant owner who has lost 40% of his business:

We are caught between the hammer and the anvil. We don’t believe in violence and we are suffering from this economically. But we can’t stay silent while occupation and incitement against Palestinians goes on.

Israeli Arabs are far behind the Israeli national average in education, employment, although they are much better off than Palestinians in the West Bank. Israel National News and Bloomberg