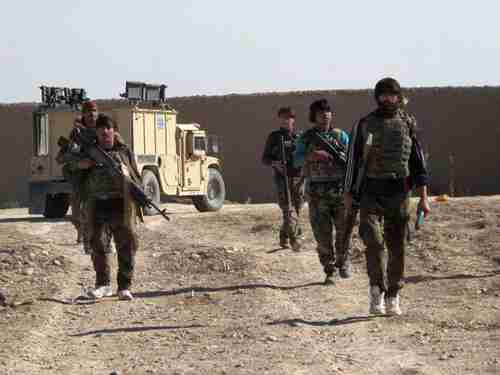 As we wrote two days ago, Taliban forces in Afghanistan are scoring victory after victory in Helmand province. Some reports indicate that the crucial city of Sangin has been captured, and that all of Helmand province is in danger of falling.

To bolster desperate Afghan government forces, Britain said on Tuesday that it was sending some forces back to Helmand province. A unit of about 30 soldiers from Britain’s elite Special Air Service (SAS) and up to 60 U.S. special forces have been sent to bolster the Afghan forces to defend the town, but the Ministry of Defense (MoD) said that they were not sent there to fight, but only to advise.

Britain ended combat operations in Afghanistan last year, but before then it was British troops that were mainly fighting the Taliban in Helmand. Sangin became known as “the most dangerous place in Helmand” because of the ferocity of attacks that claimed the lives of 106 British service personnel. The body count rose as the first UK units endured the most intense ground fighting since the Korean war, fighting for control of a district that was a major prize for Taliban fighters because of its lucrative opium trade.

Many UK mothers are now expressing concern that everything that the British troops fought and died for was for nothing.

The BBC interviewed a mother of a soldier who lost both his legs while serving in Afghanistan, and who was asked how she felt about the decision to send troops back to Helmand:

‘Sadness, anger, but most of all a desperate, desperate sense of waste and fear that we are still not learning the lessons and that it’s British troops that are going to pay the price for that failure to learn.’

[The lessons learned are] that you don’t get yourself involved in an under-funded, under-defined, under-supported war in an isolated position, that these issues have got to be global and that there has got to be support from the Muslim world, throughout the world, and that we cannot – we don’t have the resources to – take on these issues by ourselves.

Besides its importance for its lush opium trade, it is also a major transit point and close to a major highway that cuts across Helmand. If the Taliban take control of Sangin, then will the Afghans will be unable to resupply its forces in southern Helmand. Daily Mail (London) and Telegraph (London) and Reuters

According to the International Organization for Migration (IOM), 1,005,504 migrants have entered Europe this year as of December 21, and they’re still arriving at the rate of 4000-5000 per day.

According to the IOM, the numbers by country of entry are as follows:

The total of migrant/refugee deaths now stands at 3,692.

Over half of the migrants were refugees escaping the war in Syria.

Germany, the most economically powerful country in the European Union, has led the way in extending a welcome to migrants, and is expecting to take in a million asylum-seekers.

At the other end of the spectrum is Hungary, led by prime minister Viktor Orbán, who has become increasingly popular since his right-wing Fidesz party government has been conducting anti-migrant media campaigns. According to Orbán:

Mass migration is threatening the security of Europeans, because it brings with it an exponentially increased threat of terrorism. […]

Syria’s neighbors are bearing most of the burden of flood of Syrian refugees. Turkey is hosting 2.5 million, Lebanon and Jordan are each hosting more than a million. International Organization for Migration (IOM) and BBC and CNN