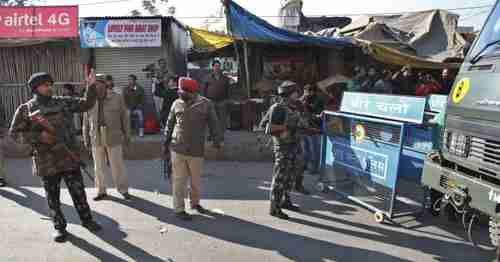 Aftermath of terror attack on Pathankot air base (AP)

Indians are in shock at how easily a terror group was able to infiltrate an Indian Air Force Base at Pathankot, in Punjab province near the border with Pakistan, for a devastating terror attack on January 2-3.

In retrospect, it seems like a comedy of errors.

India’s Border Security Force (BSF), which guards the international border between Punjab and Pakistan, at first had no clue that heavily armed terrorists had infiltrated the base from Pakistan. The terrorists evaded the BSF when they were discovered, but the BSF didn’t raise the alarm, thinking they were merely robbers.

Late on December 31, the terrorists grabbed Pathankot’s Superintendent of Police (SP), Salwinder Singh, blindfolded him and threw him out of his car, in which they fled. When Singh reported the incident, his seniors did not take him seriously, thinking that he had gotten drunk at a New Year’s Eve party. When they finally took him seriously, they had no idea where the terrorists had gone. The base has a sprawling perimeter with a circumference of 25km, and has nearly 10,000 families living there.

India’s National Security Guard (NSG) was activated, and gunfights between the terrorists began on January 1, and continued through the night into January 2. Three terrorists were killed, and the NSG thought the fight was over, but gunfights with the remaining terrorists began again later that day.

The Pathankot incident is being viewed as an index of the extraordinary weakness in the protection of the country’s critical strategic assets. The air force base constitutes the frontline air defense for any confrontation with Pakistan, and yet the terrorists succeeded in penetrating into the campus and inflicting significant casualties. This was despite nearly 20 hours of clear warning, a definitive identification of the intended target, and a systemic response that had been initiated fairly early on January 1, 2016, after central intelligence agencies picked up conversations by the terrorists with their handlers and their families, and the Punjab Police received specific information about their movements and intention from the ‘abducted’ Superintendent of Police whose car was used by the terrorists. Hindustan Times and South Asia Terrorism Portal (SATP – India)

The perpetrators are believed to be the Pakistan-based terror group Jaish-e-Mohammed, based on evidence collected by India, and passed on to Pakistani authorities.

India’s prime minister Narendra Modi had visited Pakistan’s prime minister Nawaz Sharif in the latter’s ancestral home near Lahore on December 25. (Neither Hindus nor Muslims celebrate Christmas.) The meeting was described as “very warm,” and held “amid immense goodwill in a very cordial atmosphere.”

Their meeting was part of the hallucinatory “peace process” talks that have been off and on for years, through many changes of government, but never getting anywhere. It is thought that Jaish-e-Mohammed may have conducted the Pathankot attack in order to, once again, derail the “peace process.”

There are certainly no “peace talks” planned now for any time soon. India’s defense minister Manohar Parrikar on Monday warned that India will get revenge on the perpetrators of the attack.

If someone is harming this country, then that particular individual or organization, I purposely used the words individual and organization, should also receive the pain of such activities. The time and place should be of our choosing.

Basic principle is that until we give them pain, whoever they may be, until then, such incidents will not reduce.

However, Parrikar did not respond to questions about whether that India is planning a retaliation attack on Jaish-e-Mohammed on Pakistani soil. New Delhi TV (25-Dec-2015) and Indian Express and India.com

The Pathankot incident is reviving bitter memories of the horrendous “26/11” terrorist attack on a number of hotels in Mumbai, India. The attacks began on November 26, 2008, and lasted three days, killing 166 people, and wounding hundreds more. ( “After Mumbai’s ’26/11′ nightmare finally ends, India – Pakistan relations face crisis” from 2008)

The attack was blamed on Lashkar-e-Taibi (LeT), a Pakistani terrorist group that was formed in the 1990s by Pakistan’s Inter-Services Intelligence (ISI) agency to fight India in the disputed regions of Kashmir and Jammu. After the attack, India threatened to send its army to attack LeT on Pakistani soil, which might have led to a major war. This was prevented by hard intervention by Secretary of State Condoleezza Rice.

Pakistan promised to pursue and prosecute LeT in its own courts. However, the alleged leader of the Mumbai attack, Zaki-ur-Rahman Lakhvi, has never been seriously prosecuted, presumably for fear of implicating some Pakistani government officials. Lakhvi is out on bail, and is now leader of Jamaat-ud-Dawa (JuD), which is a front group for LeT.

The Pathankot attack revives the same issues, particularly after Manohar Parrikar’s demands for retaliation, and the hinted possibility of Indian military action to pursue Jaish-e-Mohammed on Indian soil.

All the usual diplomatic moves are being played: