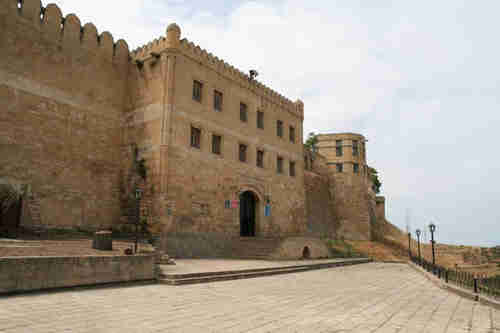 In Russia’s 5,000 year old city of Derbent, the Citadel was built by a Persian tsar in the sixth century.

Russia is increasing its military presence and conducting large counter-terrorism military exercises in the south of its North Caucasus province of Dagestan in southern Russia.

The military exercises were triggered by a December 29 Islamist insurgency gun attack at the Derbent citadel, a Unesco World Heritage site and big tourist attraction. A group called “warriors of the Caliphate,” affiliated with so-called Islamic State (IS or ISIS or ISIL or Daesh), claimed responsibility for the attack.

The insurgents opened fire on a group of tourists accompanied by two border guards from Russia’s Federal Security Service (FSB) on the citadel’s viewing platform. One border guard was killed, and eleven others were injured.

At least 120 people were killed by insurgents in the Derbent region last year. Since this was the second shooting in the Derbent area in the past three weeks, it is clear that a local cell of the armed underground movement was involved. The insurgent cell is apparently targeting the police and FSB (Federal Security Service) in that part of Dagestan. After both attacks, the militants managed to escape unharmed.

Russia’s media is playing down the ISIS connection. Russia also attempted to do that after an ISIS affiliate brought down a Russian Metrojet Airbus A321 airliner over Egypt in November. As we wrote in “5-Nov-15 World View — Bombing of plane in Egypt threatens Russia’s Syria strategy”, the Russian military intervention in Syria is inflaming Sunni Salafists and jihadists, who have been threatening to increase their attacks on Russian targets as a result.

The reason is that the injection of Orthodox Christian Russian troops in Syria is reviving the memory of the Soviet invasion of Afghanistan in the 1980s, which Salafists saw as a Christian invasion of a Muslim country. It brought the rise of modern Sunni jihadist movements, including the leadership of Osama bin Laden and the formation of al-Qaeda, so the invasion runs very deep in the psyches of Sunni Salafists and jihadists. Russia’s new intervention targeting mostly Sunni Muslims in Syria, appears to be a repeat.

With ISIS now claiming credit for terrorist attacks in Dagestan, Russian officials have to deal with new problems. More and more Russians are questioning the wisdom of the Syria intervention. Many reports indicate that Russian soldiers do not wish to fight there. Reports of ISIS attacks on Russian airliners and tourist locations will only turn public opinion against the Syria intervention. Tass (Moscow, 30-Dec-2015) and Telegraph (London) and Jamestown and Tass (Moscow)

Officials from the US, Britain and France are becoming increasingly alarmed at the growing strength of the so-called Islamic State (IS or ISIS or ISIL or Daesh) in Libya, which already controls a long strip of coastline around the city of Sirte, has used heavy weapons to launch attacks against a series of oil facilities.

The U.S. has already sent a group of special forces to Libya, and plans are continuing for a Western invasion of Libya, as we reported three weeks ago ( “6-Jan-16 World View — US, Britain, France preparing new Libya military offensive early in 2016”). The military offensive is planned for around the beginning of March.

Libya now has two rival governments. One of them is in the far west in the capital city Tripoli, and the other is in the far east in Tobruk. Both governments signed off in December on a UN-backed “peace plan” to establish a single unity government that could lead a military push against ISIS.

However, earlier this week, the Tobruk government, which is the government that’s internationally recognized, announced that it was rejecting the UN plan.

But with ISIS stepping up attacks throughout the country, Italy’s Defense Minister Roberta Pinotti said in an interview that the West is prepared to intervene militarily even if Libya fails to agree on a unified government. According to Pinotti:

We cannot imagine the situation in Libya remaining in a stall as spring comes and goes.

In the past month, we have worked more diligently with Americans, British and French. I wouldn’t call it an acceleration, and it’s certainly not unilateral. We are all agreed that we must avoid uncoordinated action.