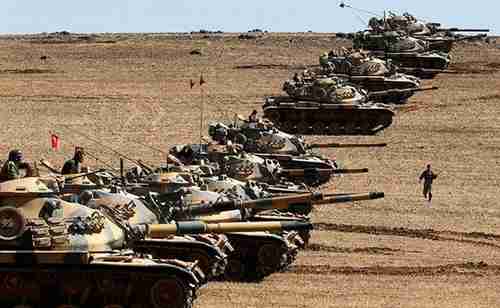 Turkey’s military on the border with Syria in 2015

Turkey’s military shelled Kurdish YPG militia targets in northern Syria near the Turkish border on Saturday. The shelling continued for two hours. The attacks were triggered by the YPG capture of Menagh, a former military air base near the town of Azaz. This is today’s military escalation du jour following last week’s “peace agreement” between the US, Russia, and other international leaders. ( “12-Feb-16 World View — US and Russia agree to a farcical ‘cessation of hostilities’ in Syria”)

There has been an increasingly bitter disagreement between Turkey and the United States over the role of the YPG in Syria. The YPG have links to the PKK (Kurdistan Workers’ Party) in Turkey, a separatist group that has conducted numerous terrorist attacks in Turkey since 1984. The stated goals of the YPG are to fulfill the PKK’s separatist goals in Syria by creating a de facto Kurdish state from west Syria to east Syria and into Iraq, along Syria’s northern border with Turkey. Turkey says that the YPG is also a terrorist organization. The United States designates the PKK as a terrorist organization, but says that the YPG are not.

Although the Kurds are mostly Sunni Muslims, the Kurdish militias are politically on the far left, and are allied with Russia and the Alawite/Shia government of Syria’s president Bashar al-Assad. The US has supplied arms to the YPG in its fight against the so-called Islamic State (IS or ISIS or ISIL or Daesh), after ISIS brutally attacked the Kurds in northern Iraq last year. American support for the YPG in Syria has led to vitriolic attacks by Turkish leaders on America. ( “11-Feb-16 World View — Turkey’s Erdogan splits further with US, blaming it for a ‘sea of blood'”

Turkey has repeatedly warned that a Kurdish attempt to take control of the area on the Turkish border north of Aleppo, which would be a strategic victory in the YPG goal of a Kurdish state, would be entirely unacceptable to Turkey, and would trigger a Turkish military response. Earlier in the day, a Turkish military source that “PYD/PKK” forces had shelled Turkish targets.

Today retaliation was taken under the rules of engagement against forces that represented a threat in Azaz and the surrounding area.

We will help our brothers in Aleppo with all means at our disposal. We will take those in need but we will never allow Aleppo to be emptied through an ethnic massacre. …

Those who say PYD is not a terrorist organization either do not know the region, or have ill intentions.

The terror organization PYD is in cooperation with Russia and Assad, and is attacking Turkmens [in Syria]. If there is a threat against Turkey, we will strike PYD like we did Qandil [PKK’s HQ located in Iraq]. […]

“Somebody needs to draw a line against Russia and raise their voice.

US State Dept. spokesman John Kirby responded by saying that the US would continue full support of the YPG in Syria:

“”We have urged Syrian Kurdish and other forces affiliated with the YPG not to take advantage of a confused situation by seizing new territory. […]

Turkey and the YPG share a serious threat of ISIL poised just to the east of the Azaz corridor. We continue to encourage all parties to focus on this common threat, which has not subsided, and to work towards a cessation of hostilities.

There was no statement from Russian officials regarding the attack on the Kurds, but it is pretty certain that Russia will retaliate, possibly even bombing military targets on Turkish soil. This would be a major further escalation. Hurriyet (Istanbul) and Today’s Zaman (12-Feb) and Anadolu Agency

Saudi Arabia is sending 8 to 10 warplanes to Turkey’s Incirlik air base, saying that they will be used in cross-border attacks on ISIS in Syria. (Everyone says that they are only attacking ISIS, no matter who they are attacking.) Incirlik air base is already being used by the U.S.-led coalition with Britain and France in cross-border attacks on ISIS.

In addition, Saudi Arabia and Turkey are discussing plans for a joint operation to deploy ground troops into Syria to fight ISIS on the ground.

Saudi Arabia’s foreign minister Adel al-Jubeir said, “There is discussion on whether ground troops are needed against IS. If a decision is taken to send in special units against IS, Saudi Arabia is ready to take part.”

The discussion of Saudi and Turkey ground troops in Syria has drawn sharp criticism from within Turkey itself, from Devlet Bahçeli, the leader of the opposition Nationalist Movement Party (MHP):

The government is of course required to protect national security and to take deterrent measures in the face of dangers emanating from outside our borders. But if a military operation is being planned in the name of executing or assisting some global projects and a cooperation is forged with Saudi Arabia to that effect, the results could be terrible. It could lead to unimaginably grave consequences.

Turkey will not be a proxy to execute scenarios of violence and atrocity drafted in foreign capitals. Otherwise the outcome could be catastrophic. […]

A ground operation without the approval of Parliament could cost us a homeland.

As I’ve been writing for years, Generational Dynamics predicts that the Mideast is headed for a major war between Shias and Sunnis, between Arabs and Jews, and between different ethnic groups. Almost every day there’s a new event that moves the Mideast along that path. It may not be very long now. Today’s Zaman (Ankara) and Today’s Zaman

Supreme Court justice Antonin Scalia died unexpectedly on Saturday while on a hunting trip. He was a conservative member of the Court, appointed in 1986 by Ronald Reagan.

There has been hours of wall-to-wall news coverage of the reactions to Scalia’s death. As a public service to my readers, I’m providing you with the entire story:

Republicans: Scalia’s death is an enormous shock, and a profound loss to the Court and the entire nation.

Republicans: The next president should pick a successor next year.

That’s it. That’s the entire content of the news coverage of Scalia’s death. Now you can go back to reading about Kanye West and Taylor Swift. Washington Post and E! Online