To kick off a global 24-hour “confession drive,” Pope Francis went to confess his own sins on Friday before moving to the other side of the confessional screen to hear the confessions of other penitents.

In an address Friday to priests who hear confessions, the Pope reminded them that “the confessor is himself a sinner, a man always in need of forgiveness; he is the first one who cannot do without the mercy of God, who chose him and commissioned him for this great task.”

The sacrament of Reconciliation, or confession, is a typical Catholic devotion during the penitential time of Lent, although it is available year round. Roman Catholics believe that Jesus’ instruction to his apostles to forgive other people’s sins in his name was a permanent gift to the Church that continues to be exercised by ordained priests. 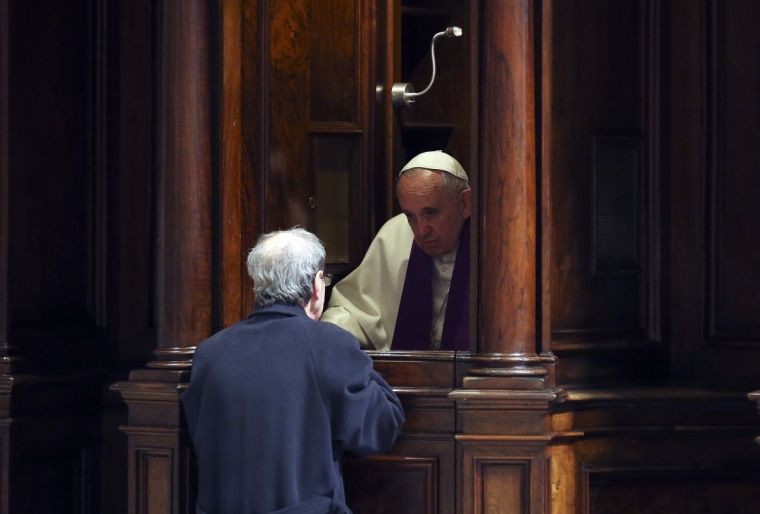 Pope Francis has campaigned to encourage priests around the world to spend more time hearing confessions, an appeal that he reiterated on Friday.

“Let us place the Sacrament of Reconciliation at the center once again, and not only in this Jubilee Year!” Francis urged them, since confession is “a true space of the Spirit in which all, confessors and penitents, are able to experience the only definitive and faithful love, the love of God for each of His children, a love that never disappoints.”

The Pope told priests that Jesus is the certain way of mercy, the only one with authority on earth to forgive sins, but that he entrusted this mission to his Church.

“The Sacrament of Reconciliation is therefore the privileged place to experience the mercy of God and celebrate the feast of the encounter with the Father,” he said.

In the lead-up to the Jubilee Year of Mercy, Pope Francis hammered home the message of forgiveness, and urged all the Catholic priests in the Church to dedicate more time each week to hearing confessions.

In an audience  with a group of priests last fall, Francis implored them to “devote much time to the sacrament of reconciliation,” as an important witness of God’s mercy and a means of bringing people back to God.

“Please, be great in forgiving,” the Pope told them

Last month, Francis commissioned a group of priests with the task of devoting themselves to preaching forgiveness and hearing the confessions of repentant faithful during the Jubilee Year.

In the spirit of the patron saint of Catholic priests, Saint Jean Marie Vianney—who used to spend up to 18 hours a day hearing confessions in his little parish of Ars, France—the Pope asked for priests to assist him during the Jubilee year for the millions of faithful who will wish to take part in the Sacrament of Reconciliation during the year.

Last March, Pope Francis addressed a group of priests about how to be good confessors, just before going to confession himself.

Francis told the priests that their first task was to help penitents experience God’s mercy. “Confession should not be a ‘torture,’” the Pope said, “but everyone should leave the confessional with joy in his heart, his face beaming with hope,” even if sometimes “wet with tears of conversion and the joy that comes from it.”

Francis told the priests that confession should not “become a heavy, annoying, and intrusive interrogation.” It should be a liberating encounter, the Pope said, which also includes the commitment to make reparation, as far as possible, for the evil committed.